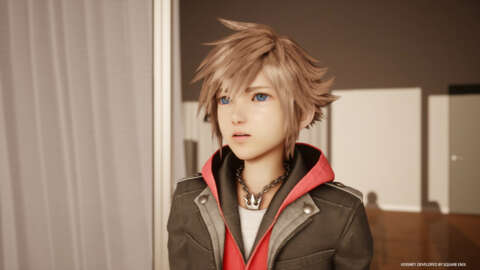 Square Enix has announced that development is underway on Kingdom Hearts IV, the next entry in the long-running Disney RPG series. The news came as part of a 20th-anniversary celebration event and included the release of the very first trailer, which you can watch below.

Kingdom Hearts IV kicks off a new storyline for the franchise, the Lost Master Arc. Sora returns, though as you’ll see in the trailer and screenshots, he’s sporting a new look. The KHIV portion of the trailer begins at around the 4:05 mark:

Want us to remember this setting for all your devices?

Please use a html5 video capable browser to watch videos.

This video has an invalid file format.

Please enter your date of birth to view this video

By clicking ‘enter’, you agree to GameSpot’s

The trailer showcases some brief glimpses of gameplay as Sora squares off against a giant shadow monster in the middle of a city street. This new location is Quadratum, which Square Enix describes as a “large, expansive city set in a gorgeous, realistic world unlike anything ever seen before” in Kingdom Hearts.

No further details were shared on Quadratum or the overall gameplay or story. Donald and Goofy both return in KHIV, and a new “mysterious” new character named Strelitzia will also be introduced.

There’s no word on what platforms KHIV will be available for, although Kingdom Hearts 3 was eventually released for PC, Xbox One, PS4, and Nintendo Switch, with the latter being a cloud-streaming version. Likewise, there’s also no release date shared.

Alongside word of the next core entry in the series, Square Enix used the anniversary event to announce a new mobile game called Kingdom Hearts Missing-Link for iOS and Android, which can also be seen in the trailer montage above.