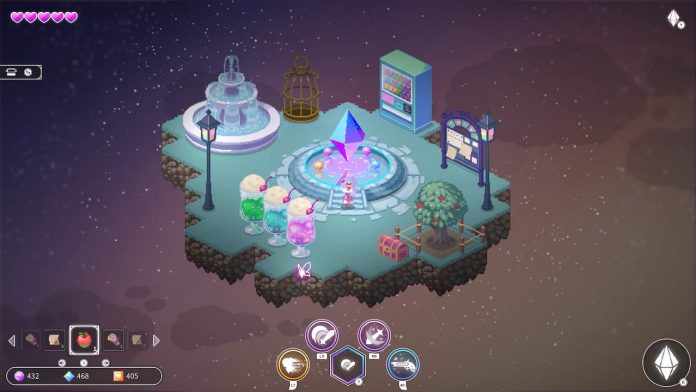 Japanese developer YUKIUSAGI Games has announced that Crystarise will be coming to Steam on October 28.

Crystarise is a 2D open world action RPG that combines action gameplay, where you explore fields, and simulation gameplay, where you customize a base. The protagonist of the game is a young girl who is tasked with becoming the guardian deity of a mysterious sky island. The girl descends to the land called the “great vast world” where she searches for resources that can be used to develop the sky island. Players will travel between the sky island and the land while building their own unique island.

The land is procedurally generated on each visit and features a vast variety of environments, including plains, deserts, and shadowy dungeons. Wood, ore, and other resources can be obtained from these areas. Monsters also roam these lands, but by making good use of various actions such as slashing, shooting, and dashing, the protagonist can defeat these monsters and obtain even more materials. There are also treasure chests to find, and all the items and resources that you gather, including the crafting recipes required to create new items, can be brought back to the sky island.

The mysterious sky island is small enough to easily fit on-screen in the beginning, but you can freely expand it by using the resources that you gather. There are no limits to how far you can expand the island, and it is structured in blocks, making it easy to remove sections and redesign it. All items and NPCs can be arranged freely, giving you the ability to create your own unique island. Trees, farms, streetlights, fountains, vending machines, and countless other items can be created as long as you have a recipe and the necessary materials.

There is a quest board on the island from which you can accept quests and receive materials as a reward for completing them. Quests range from simple tasks, like opening treasure chests or breaking rocks, to ones that involve defeating specific monsters. In addition to these, the game also seems to feature a separate main quest.

Using materials to create items is not only done for the purpose of expanding and decorating your island as it can also grant more power to the protagonist. For example, creating a windmill will increase the speed of her dash, and placing many streetlights will allow her to explore at night just as easily as she can during the day. Each item is equipped with these kinds of skills, which allows for the creation of different character builds. In Crystarise, as you journey back and forth between the sky island and the land below, you will not only develop the island itself but also its young protector.