Autonauts starts you out as a boy with a stick and a rock. Shortly thereafter, you have a crude robot. Then you set out to conquer a planet. It’s a tale as old as time.

As its name suggests, Autonauts is a building and crafting game focused on building and automating production. You do this through your robots, whom you “program” by training them to perform repetitive tasks. 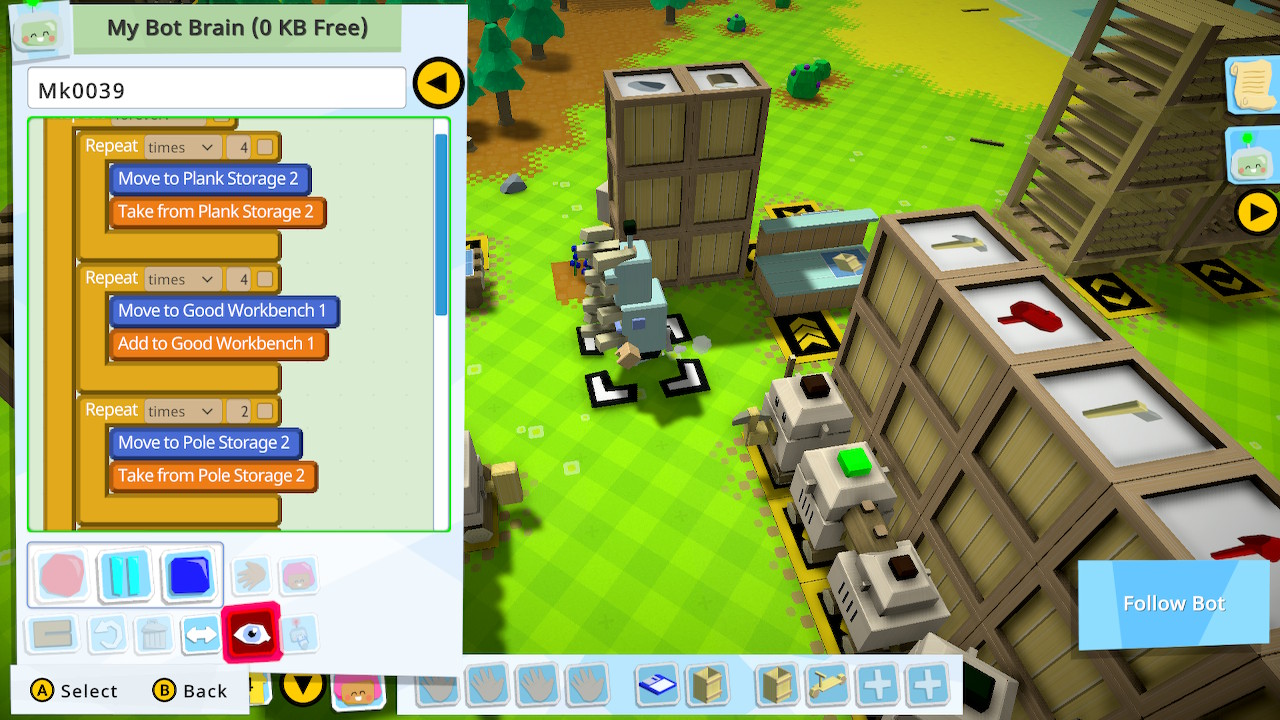 As you go through the game, you unlock more technologies, allowing you to build more complex structures and smarter, faster, stronger robots. All the while, though, you have to deal with tools breaking down, bottlenecks in resources, and the timing of your automation suddenly falling apart.

Rendered in the cubic style so popular with crafting games, Autonauts posits a world where axes can and will break, but robots can be made out of sticks and logs and run forever with no established source of power. The only real goal is to advance to the next tech level, and the only real scarcity is in resource management.

Starting literally with sticks and rocks, you use your first tool to make an axe to cut down a tree, which makes a log. This allows you to make structures like workbenches and robot assembly tables, and it introduces you to one of the game’s unspoken “tools can break, but structures can not” concept. Thus, when you get access to a chopping block (which combines a log with an axe), it gives you the ability to process wood into plans and poles without wearing down the axe. 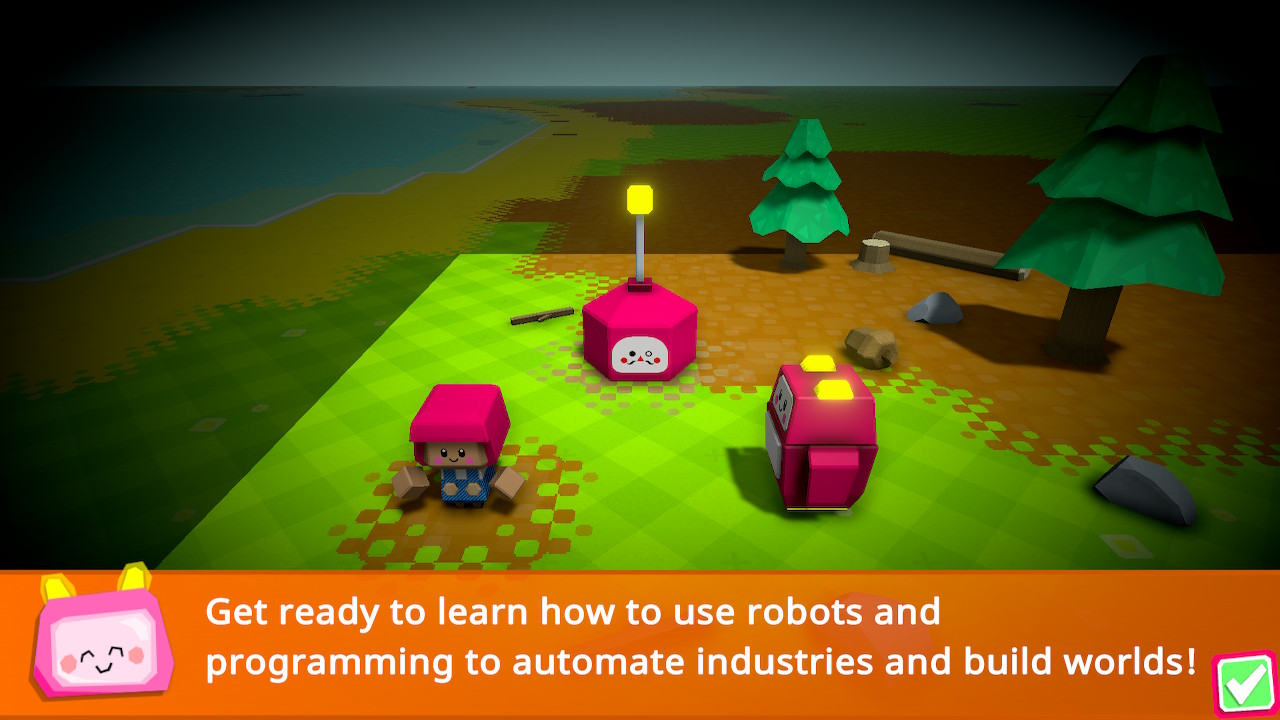 But you’ll still need a supply of axes to cut down trees. The solution, then, is to program a robot to make axes. Having a robot search for sticks, then search for rocks, then assemble them would take up too much memory (more on that in a moment). So what would be really convenient would be having one robot to gather sticks, another to gather rocks, and a third to make the axes for a fourth to use to chop the tree.

The other resource you need to manage is your robots’ memory capacity. You assign them tasks by pairing up with a robot and walking it through the tasks you want it to do: Take axe, chop down trees, etc. In the beginning, your robots are limited to only a few lines of “code.” Abstract concepts like “search area for this particular resource” and “use the workbench to make this particular tool” require extra commands. 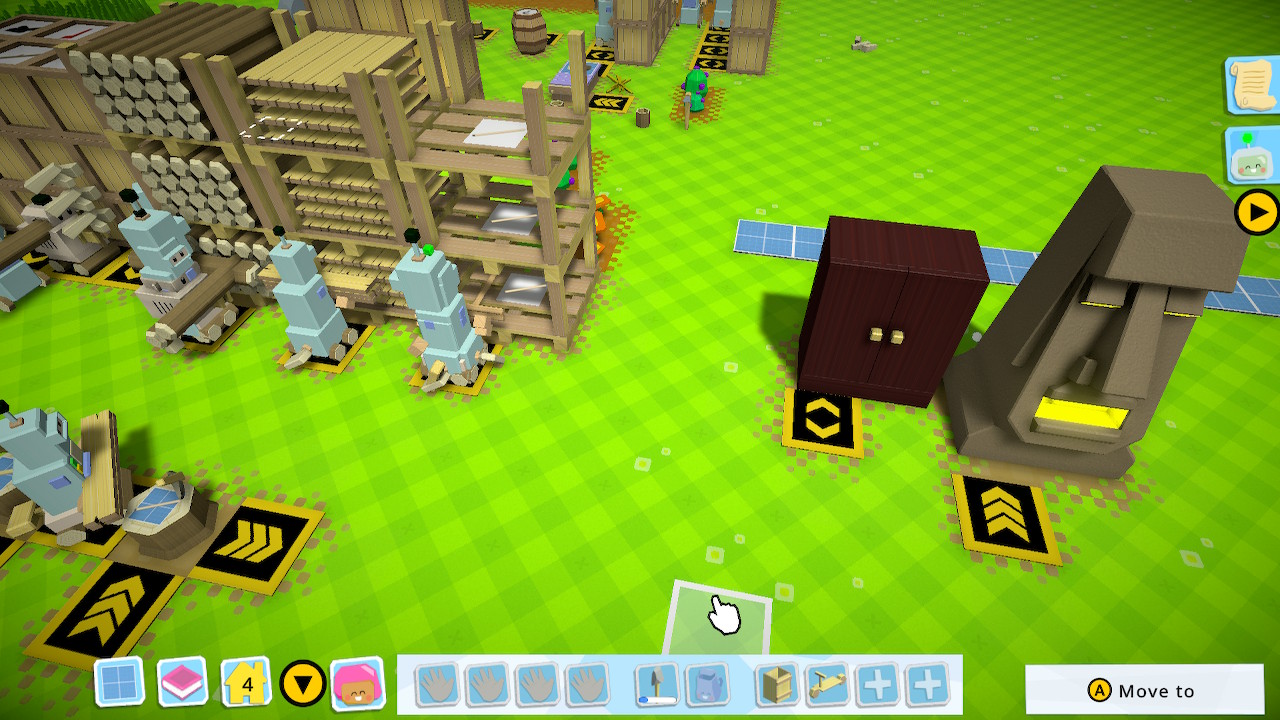 Fortunately, you can access if/then/until commands that can let you repeat tasks. Figuring out how best to do this is the game’s main thrust, as once you leave them unattended to work on something else, the robots will follow your instructions exactly as you gave them until something in the process breaks.

And something always breaks.

Autonauts has a very robust interface for you to manage all your tasks, including commands that give you a thumbnail version of every robot’s status, the items you yourself are carrying, and a detailed list of what a robot is doing (or trying and failing to do). In addition, there’s a good tutorial that explains everything you’ll need to know. But still, it’s complicated. 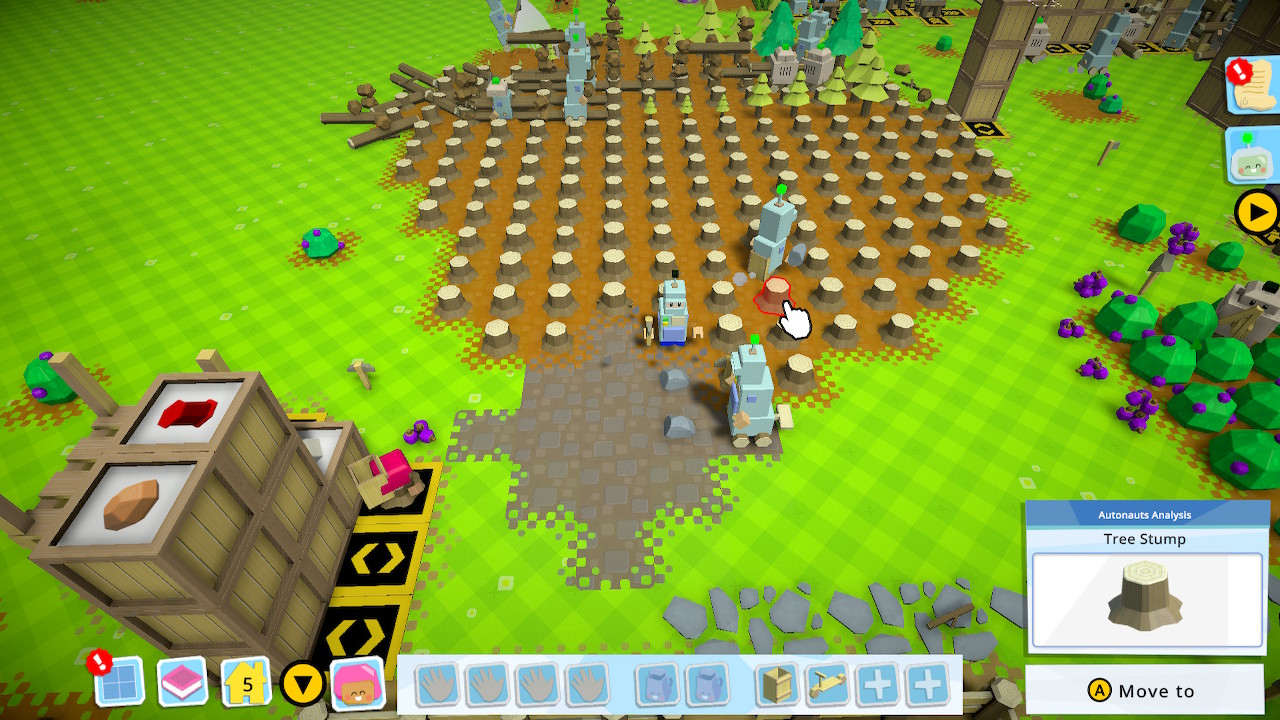 For example, use your “whistle” (Y button) to select the robot you want to program. Once you’ve selected the robot (right stick), you press the left button to open the programming screen. Now you use the left stick (pressing the left button again will dismiss the programming screen) to move to the command you want (record programming, pause, erase, or other commands). Then, after you’ve highlighted the command you want, you press the A button to select it. It’s extremely convoluted, but given what you’re trying to accomplish using a game controller, it’s necessary.

Autonauts is a game about accomplishing repetitive tasks (namely programming robots one by one) in the short term so you don’t have to keep doing them in the long term. It can be tedious in the beginning before you have a good handful of bots to stockpile components. Also, it can be repetitious throughout the game because while your tech advances from the stone age to that of a modern city, you are still doing the same thing over and over again yourself; telling robots what to gather and what to process. 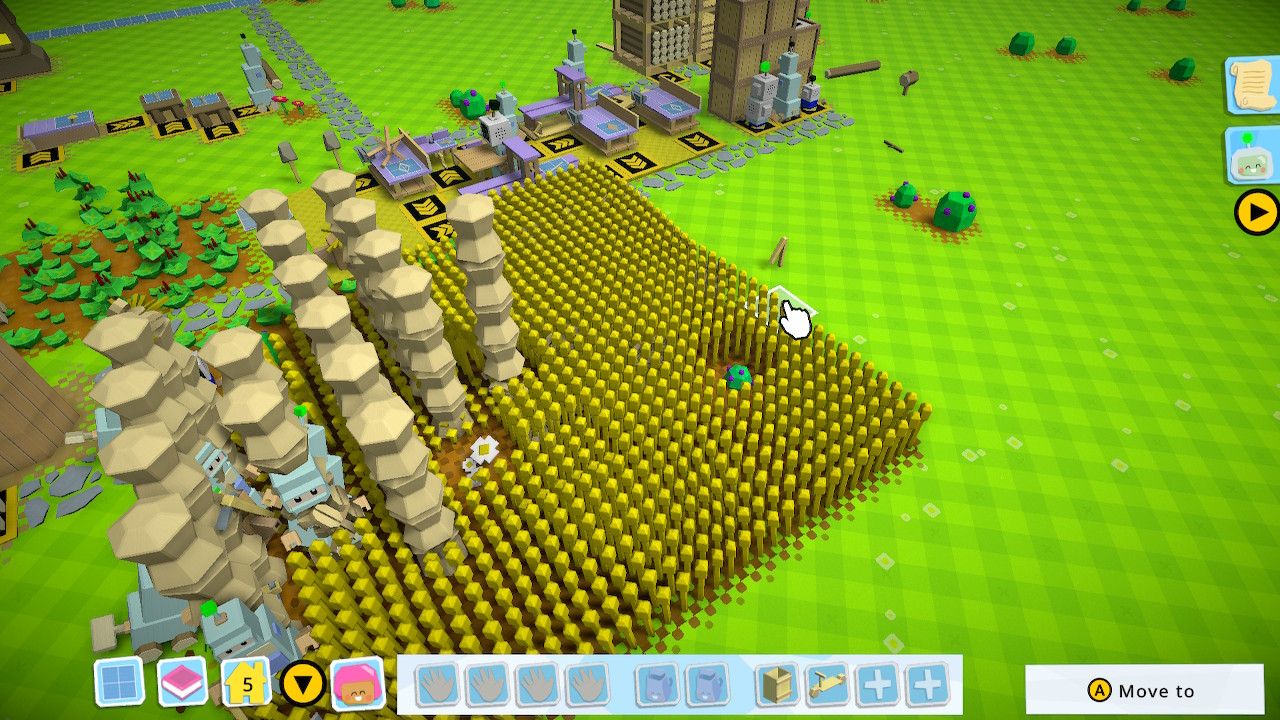 That said, I enjoyed Autonauts for the most part. It’s an open-ended game of precision. You have to get water for your crops, for example, but how you get it is more or less up to you. Do you plant your wheat near a lake so that a single bot can trundle along with a bucket or do you build barrels to store water so another bot can more efficiently use a watering can, which is faster because a can doesn’t run out as fast as a bucket?

While you can create a situation where you run out of a resource (weeds are surprisingly important, by the way), there’s otherwise very little danger in the game; no vicious animals or zombies. At a certain point you’ll need to populate your town with “Folk” who need food, shelter, and clothing. But even if you don’t provide that, nothing terrible happens to your robots, they simply stop producing “wuv,” which is a resource you use to fund research into new techs. 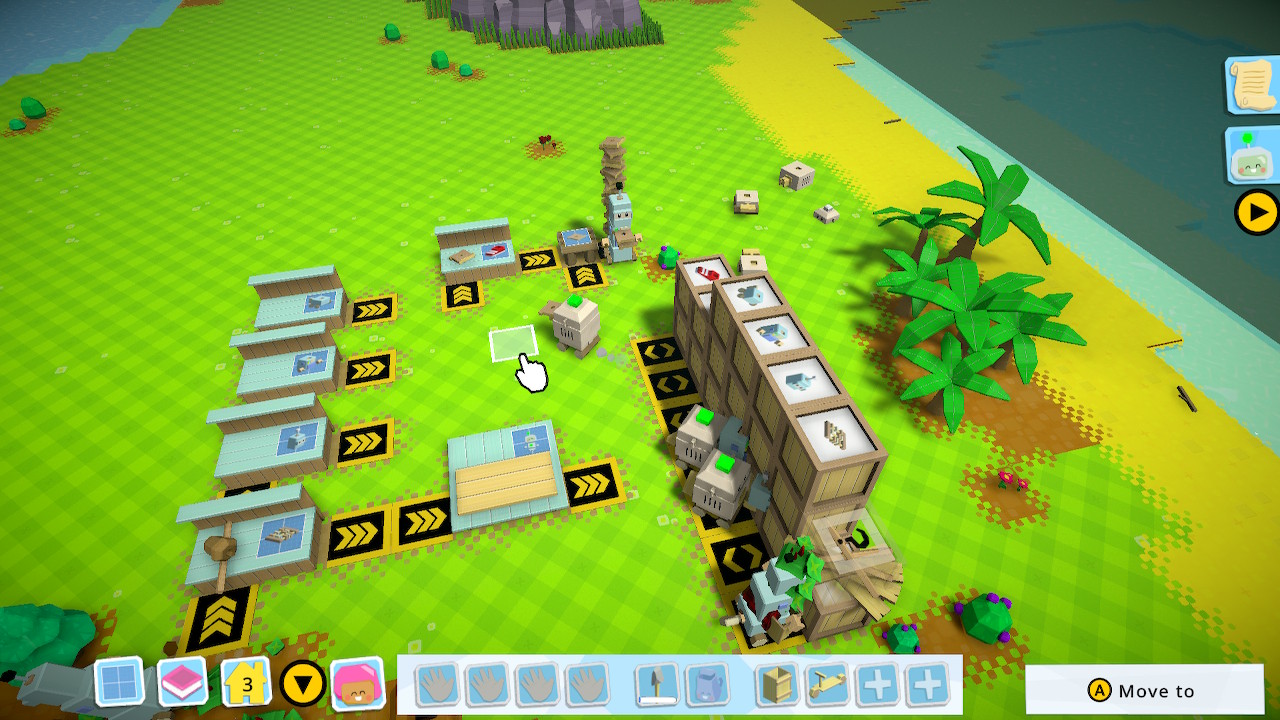 I found Autonauts to be tedious at first, then really fun, then exhausting. When I finally moved into the age of waterwheels, I zoomed out of the map and looked up my works, and despaired. There were too many bots, some running around in circles, some waiting for planks to be made, and too much grain piling up in the field, wasting away. The challenge Autonauts offered me was fun, but in the end, I just wanted to build a robot to tell all the others what to do so I could sit down and read a book.