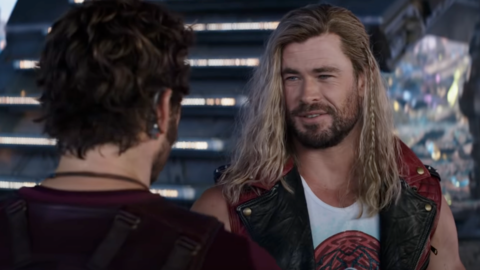 The newest trailer for Thor: Love and Thunder has arrived, showing more of Chris Hemsworth as Thor coming to terms with his life and existence after the events of Avengers: Endgame. This newest trailer also reveals, for the first time, Oscar-winner Christian Bale (The Fighter, The Dark Knight) as Gorr the God Butcher.

The first trailer for Love and Thunder debuted in April, showing Thor meeting up with the Guardians of the Galaxy (who themselves are returning for a new film in May 2023). This time out, we get the reunion between Thor and his ex-girlfriend Jane (Natalie Portman), who is able to wield Mjolnir and rule as Thor, herself. As mentioned above, this trailer also introduces Gorr the God Butcher. It may come as no surprise to you that he intends on wiping out all gods, which includes both Thors.

Thor: Love and Thunder hits theaters this July. Taika Waititi, who directed Thor: Ragnarok, returns for the sequel, while Natalie Portman is back as Jane Foster and Tessa Thompson comes back to play Valkyrie. Russell Crowe makes his debut as Zeus, while Waititi returns to voice Korg once again.

Love and Thunder is this year’s next big Marvel movie, following May’s Doctor Strange in the Multiverse of Madness, which has made more than $700 million worldwide at the box office.