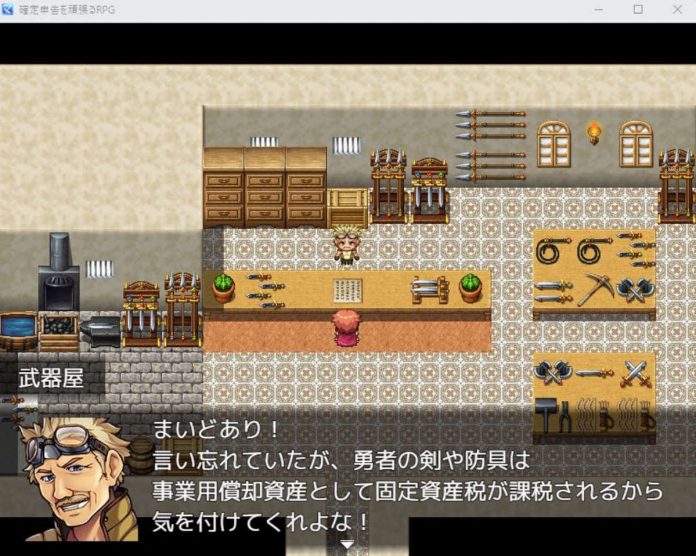 Japanese game developer @aonimaru_games has announced the start of development on a free game called Kakutei Shinkoku o ganbaru RPG (確定申告を頑張るRPG), which can be translated to something like Do Your Best Filing Taxes RPG, where players can have fun learning how to file their taxes. Filing taxes is a huge headache to many and we can already see the game getting a big response.

In Japan, the “final tax return” is a process everyone from small business owners to office workers with side jobs must do every year to determine how much they have to pay in taxes. And every year around the March deadline, it’s sure to become a hot topic. Depending on the person, the documents required can be very complicated and is the source of headaches for many.

Around the start of tax season in mid-February, we could see Twitter users wishfully hoping for the gamification of taxes. If all those frustrating forms could somehow be gamified and made enjoyable, maybe tax season wouldn’t be so bad. And that’s probably why we’re seeing this game get so much attention on social media.

The game takes Japan’s current tax system and applies it to a fantasy RPG setting. The self-proclaimed king and small business owner Michinaga somehow made large profits in forex trading. But he completely forgets about taxes and puts all his profits into building himself a castle. Since he can’t pay his taxes now, his castle is seized by the Demon King Kokuzei. Distraught, Michinaga summons the hero Zeirishi in hopes of somehow getting through his predicament. The character names are also humorous puns in Japanese, like Kokuzei meaning national tax and Zeirishi meaning tax counselor.

From the available screenshots, we can see text that helps make the tax system a bit easier to grasp like, “File my taxes and take back my tax refund the Demon King Kokuzei!” and, “with e-tax spells, you don’t have to go to a dungeon (tax office) to file (battle)!” There are other humorous touches like weapons and armor being considered fixed assets, so you have to pay a tax when you buy them.

According to @aonimaru_games’s tweets, your HP is the money you have, and enemy HP is represented by tax amounts. You can win battles by using deductions and expense calculations to get the tax amounts (HP) to zero. In battle, your party members’ tax exemptions for dependents and the expense sheets you find in treasure chests will be important. It’s a comedic way to take Japan’s actual tax system and make an RPG system out of it.

As for @aonimaru_games’s work up to this point, they also have an RPG based in Nara, Japan called Fi-Nara Fantasy that’s now available free of charge. @aonimaru_games is a creator with a unique brand of comedy born from mixing unusual themes with different game genres. We can expect this game to be packed with their unique comedic taste as well.

For most Japanese citizens, the deadline for filing taxes is March 15, but the nightmare will return once again next year. Maybe Kakutei Shinkoku o ganbaru RPG can make filing a bit less of a struggle next time tax season rolls around. As a freelance writer who suffers filing taxes every year, I (the original writer of this article) wish @aonimaru_games the best of luck.