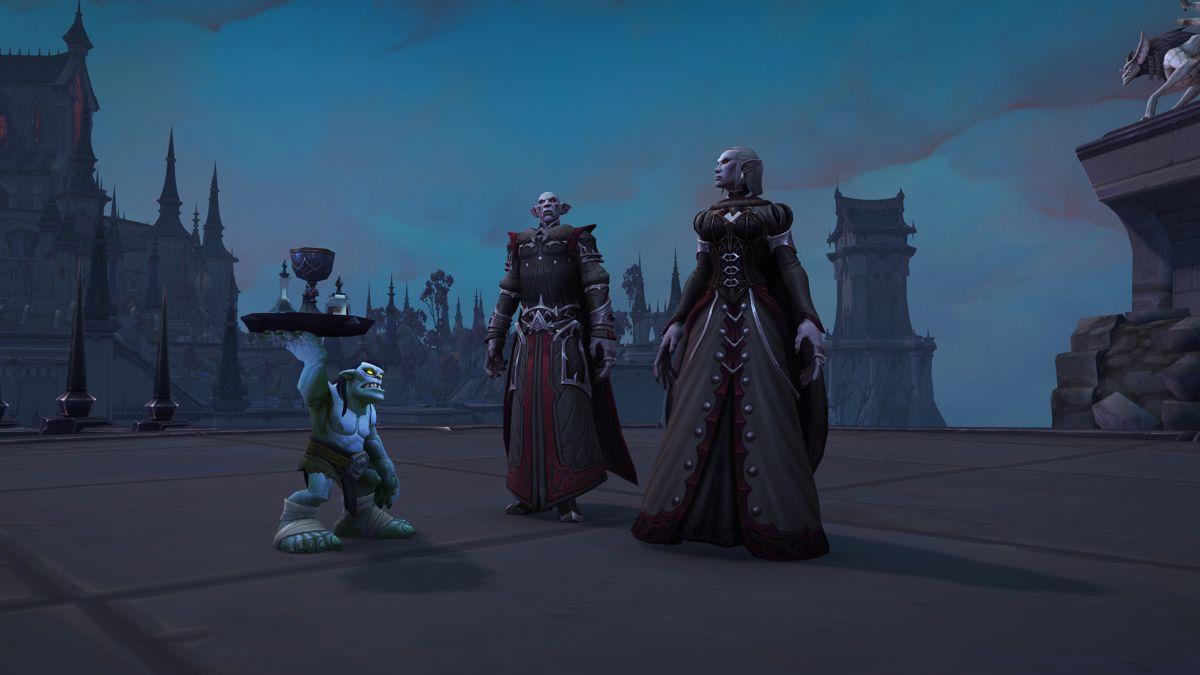 When Shadowlands launches this fall, players will venture into Warcraft’s afterlife, where four different covenants struggle against an evil force that is devouring all the soul energy. Each of these covenants has their own zone that reflects their style, like the vampiric Venthyr and their enormous, gothic citadel of Revendreth. As players level up, they’ll eventually join forces with one of these covenants, unlocking access to special new abilities and armor sets. They’ll also help rebuild a Covenant Sanctum which has unique rooms and structures that unlock all sorts of nifty features like extra fast travel options. But, as Hazzikostas explains, players who join up with the Venthyr will also be able to host vampire parties.

“If you are a Venthyr in Revendreth, you also have a fourth section of your Sanctum known as the Ember Court, and what the Ember Court is, it’s basically a hosting venue for pretty rad parties,” Hazzikostas said, explaining that before all the bad stuff happened that forces players to save the day, the Venthyr were all about aristocracy and elegance. “Part of what that means is showing off your influence by hosting grand galas for the most important individuals not just in Revendreth but from across the Shadowlands as a whole.”

Players who sign up with the Venthyr will unlock a special minigame where they get to help throw these parties. “You can go out, seek out guests, invite them to the party, not literally arrange catering but figure out the different services that will make those guests happy, play through the party in real time, maybe fending off party crashers that are trying to disrupt the festivities,” Hazzikostas said.

Players who succeed in impressing Shadowlands’ social elite will be rewarded with gifts from each attendee in the form of “sweet Warcraft loot.”

Honestly, it sounds rad. I love the idea of a system that isn’t wrapped up in the world-saving stakes that World of Warcraft is usually caught in. Hazzikostas said the system has a “remarkable amount of depth,” which makes me hopeful that it won’t be a cheap thing you do once and never touch again because your time is better spent grinding dungeons.

While only the Venthyr get parties, each covenant will have one of these types of minigames. Though Hazzikostas didn’t go into as much depth, he said those who join the Kyrian covenant can inhabit the souls of notable members and undergo special combat trials with a unique set of abilities. The Necrolord covenant lets players create their own Abominations (one of Warcraft 3’s iconic units) by mixing and matching different monster parts together. Finally, Night Fae players can access a gardening minigame where they tend a garden of souls.

For more on WoW: Shadowlands, check out our comprehensive overview. We’re also participating in a special hands-on event today and tomorrow, so we’ll have lots more to share soon.