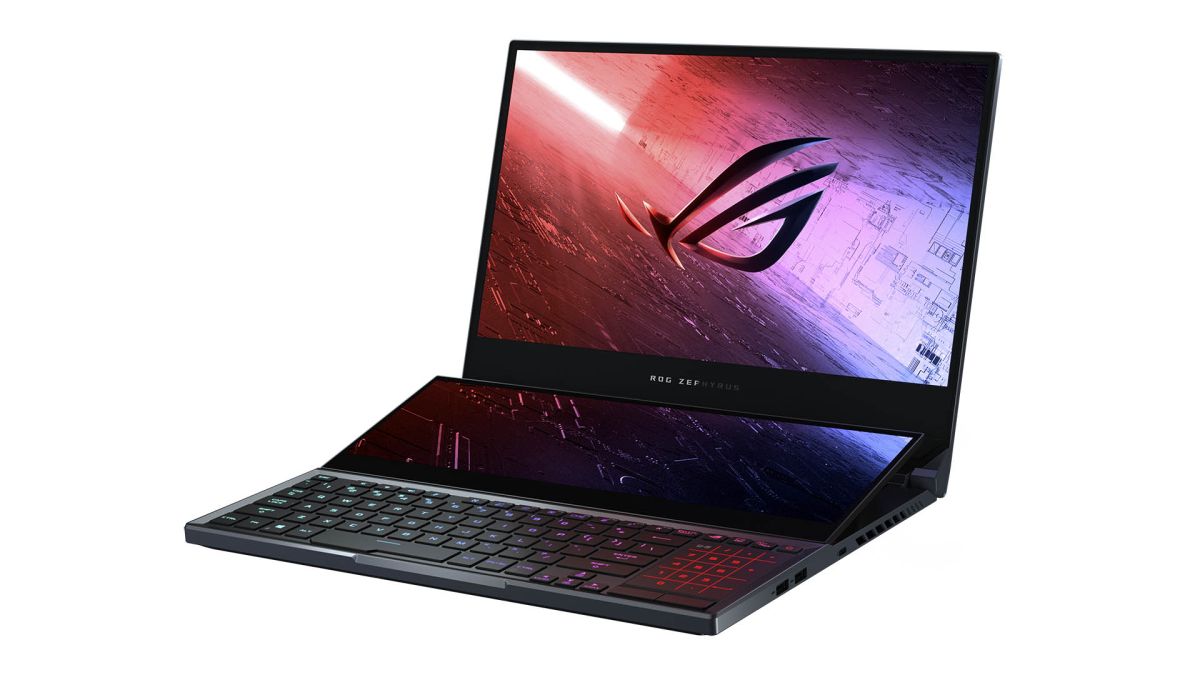 Remember that dual-screened Zenbook Pro Duo from Computex 2019? No? Well, it was pretty sweet, and we’ve since been lucky enough to get an hands-on with the new Asus ROG Zephyrus Duo 15—a gaming laptop following those same multi-monitor design points, but tailor-made for gaming and streaming.

Announced today, the Zephyrus’ speciality is, of course, its dual screens. Users can choose between a 4K or a 300Hz, 3ms 1080p panel for the topmost display, offering some flexibility whether you’re primarily using this gaming laptop for gaming or content creation. This also features a colossal bottom bezel, the likes of which haven’t been seen since the 90s ThinkPad days, but with good reason.

That’s so it sits above the second monitor—resting atop of the keyboard and touchpad just beneath the hinge. It’s configured in such a way to tilt up to a 13° angle on opening of the laptop, in a slightly redesigned fashion to the Zenbook Pro Duo, but much to the same effect.

That high pixel count is to ensure clarity with whatever app or window you choose to drag down into the secondary monitor—and you are free to choose whatever you want to occupy the extra real estate. Some apps will work better than others, and some games such as Dying Light 2 are even optimised to show further information on the ScreenPad Plus.

But you’re just as welcome to use it for a Discord, Spotify, OBS, or cat pictures. An Overwolf collaboration also means it’s easy to display real-time stats and figures on the game at hand, all without pulling you out of the hot seat.

The ScreenPad Plus is even an IPS panel, would you believe. The only downside to this otherwise pretty screen is its matt coating, which was susceptible to glare during at the (admittedly well-lit) preview event. It’s not a deal breaker, but could have you angling your laptop to keep it away from the sun or any bright lights.

Driving the Duo’s two monitor experience are the latest Nvidia Super mobile GPUs—either an RTX 2070 Super or RTX 2080 Super—and Intel 10th Gen Comet Lake H-Series CPUs. You can fit up to a Core i9 10980HK in here for that sweet 5.3GHz boost, otherwise it’s the Core i7 10875H that will occupy your lap.

The chassis is rather slim at 20.9mm thick, and I was surprised to see the unused area beneath where the ScreenPad Plus extends out from wasn’t been used as a large intake or exhaust to the high-performance components inside. Nevertheless Asus is convinced its done more than enough to keep its components cool.

One enhancement Asus is offering with this generation is Thermal Grizzly liquid metal compound on the CPU. Applied by custom equipment, and specially fenced off to prevent conductive goop tracking across your components with time, this compound and Dual n-Blade fans help reduce noise and temperatures. We’ve yet to run any benchmarks on the laptop in-person, or even experience a game running on it, so we can’t say how these changes shake out just yet. Thermal Grizzly will be rolled out across Asus’ entire 10th Gen lineup, so expect to see it throughout the range soon enough.

Asus did tell us that it hasn’t used the same liquid metal on the GPU, however, as the cost didn’t make sense with the limited extra cooling, and therefore performance, that it could afford a graphics chip. On the CPU side though it reportedly makes a huge difference to the peak thermals.

Asus is offering a USB 3.2 Gen 2 port with Thunderbolt 3 capable of hooking into an external G-Sync monitor and delivering power to the 90 Wh battery. So there’s docking available if you want a simple setup for at home and on the go. There’s also a single HDMI 2.0b output, three type-A USB ports, and gigabit ethernet. Two 3.5mm headphone jacks powered by an ESS Sabre DAC deliver complete the setup. And all that componentry has the Zephyrus Duo 15 weighing in at 2.4 kg total.

And perhaps surprising no one, the Zephyrus Duo 15 will start out life at £3,000. It’s a desktop replacement in many ways—a high-end one at that—and it’s not often a feature such as the ScreenPad Plus arrives without adding a sizeable premium. You’ll be able to find it in stores come July, 2020.

In my opinion, there’s one market where the Zephyrus Duo 15 will potentially find footing, and that’s streaming. I thought much the same of the Zenbook Pro Duo, equally as equipped with discrete high-end graphics as it was. A secondary monitor has become the customary setup for streaming, and there’s no doubt a buoyant market for high-end streaming setups that meet all the requirements and make few sacrifices in a small package. Sure, it won’t deliver the same oomph as a dual-PC setup with all the bells and whistles, but it fills a niche.