Warzone players can’t agree on what this shadow is: submarine, ghost, bug? 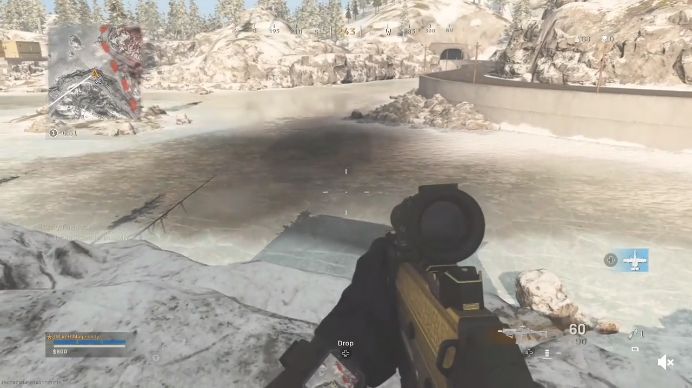 Call of Duty: Warzone players are investigating a gigantic, slow-moving shadow that appears to be below the frozen dam water in the top of Verdansk. No one is sure what the shadow is, but there are a lot of theories.

Starting on June 12, players noticed the mysterious dark blob while playing in both live matches and waiting in the pre-match lobby. A submarine-shaped shadow can be seen moving from different points in the ice to others. It’s been recorded by players in helicopters, on nearby rooftops, and from right on top of the ice, making it seem like more than a bug—though it might be one.

Some think the shadow is obviously a submarine, but that raises a few obvious questions, such as: Why is there a submarine in a frozen lake? Some have gone so far as to create ‘myth busting’ videos to point out that a submarine couldn’t fit in a body of water that small. I’ll admit I’ve never heard of submarines being docked in reservoirs, but it does look like there’s something in the water. The object appears to be moving below the ice, not a shadow cast from above.

Stopped to charge my phone, saw a big fish(?) from r/CODWarzone

That said, a less conspiratorial theory is that these are just bugged shadows. The ‘submarines’ have a habit of going through rocks and into mountains, which is not something submarines typically do. Another theory is that the shadows are supply choppers, a new feature in Season 4, spawning below ground (for some reason) before flying across the map.

There have been a number of recent teases and in-game events leading into Season 4 of Warzone, and some believe the shadow could be linked to a major upcoming map change.

“It’s interesting as to what might happen because the dam will eventually flood,” wrote user Obiwandkinobee on Reddit. “Who knows, that might be where the sub comes into play. Maybe it’s come flowing out into the ocean.”

While the shadow could be a red herring or completely unintentional, players do believe the dam will burst in an upcoming patch. After the Season 4 update, the Warzone menu changed from showing the dam overflowing to it being completely broken open. The dam is currently frozen in-game.

Is there a sub under the ice? from r/CODWarzone

Some theories are even weirder and more elaborate than the submarine guesses. Players have also noticed a strange blue light coming from beneath the ice, sometimes close to where the submarine passes. A few have suggested that the light is Element 115 from Call of Duty’s long running zombies mode or a light from some sort of nuclear reactor that will play into an upcoming storyline.

One player connected the shadow with the strange screams and howls that could be heard coming from deep within the dam back in March, implying that something more supernatural was happening. The howling could also be heard in other parts of the map.

“This combined with the screaming they had at the dam last season really makes me think the dam is going to play an important part in the future of Warzone,” wrote redditor Santacos2552. “Will it flood the map and force us to move to another one? Will it just fill the canals all over the downtown area? Will it destroy the whole dam area, making it unplayable? I have 0 answers, but I am excited to find out wtf is going on.”

What if it’s a ghost? Or a ghost submarine? Someone else thinks it’s a train ? Or a ghost train, maybe? Yeah, it’s probably a bug, but it’s more fun to speculate, and you never know: sometimes fan theories are self-fulfilling.