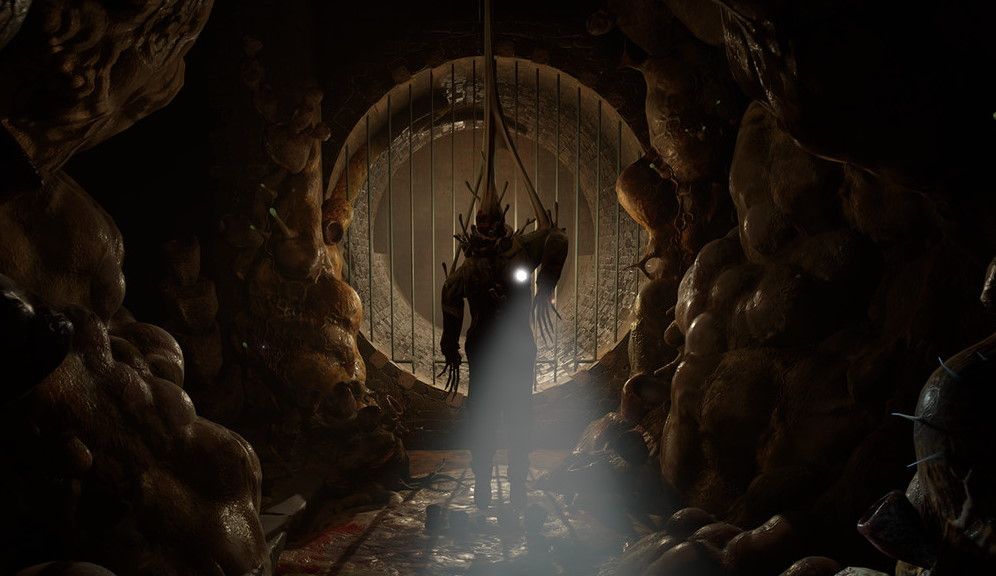 Half-Life is, first and foremost, a sci-fi shooter: aliens from another dimension are invading Earth and it falls to you, a man or woman with a gun, to do something about it. But there’s always been an element of horror running through Valve’s games. The original Half-Life got the ball rolling with headcrabs, barnacles, moaning zombies, and other such freakiness, and Half-Life 2 cranked it up with better graphics, the poisonous headcrab, fast zombies, and that little hike through Ravenholm.

Half-Life: Alyx promised to take that part of the experience even further by strapping it directly to your face, and as Chris said in his glowing review, it succeeded. “Barnacles with their sticky, dangling tongues belch and barf human remains directly onto me when they expire, giving me another good reason to avoid standing under them. Apartment walls are covered with pulsating tendrils and toothy alien blossoms that gibber and snap at my fingertips if I hover too close,” Chris writes. “Even the act of healing is gross, as I insert a glass cylinder containing a living alien grub into a wall-mounted health station and watch as it’s crushed into a bilious liquid just inches from my face, followed by skittering needles jabbing into the backs of my fingers.” Yum.

But perhaps surprisingly, we’re learning that Valve toned down Alyx’s horror in order to help ensure that players didn’t leave the experience altogether.

“It started scarier, for sure,” level designer Dario Casali told GameSpot. “I was very respectful in not trying to push it too far, because I didn’t want to lose a certain segment of people who might not have been able to continue.”

That’s also why you don’t see the lunging-at-your-face fast headcrabs and fast zombies in Half-Life: Alyx: “The shock of having that guy come around the corner and latch onto you before you’d even know what was going on was just too much,” Casali said.

The desire to avoid inflicting sensory overload on players also informed the speed of basic game mechanics. “We deliberately played with the pacing of introduction of elements that could feel overwhelming or anxiety-ridden, like being approached by an enemy for the first time and shooting a gun and reloading for the first time. You get the gun and you get the ammo before you have any kind of threat to you whatsoever,” Casali said. “We really did recognize that we didn’t want to overwhelm people from the very beginning.”

Valve isn’t the only studio to have concerns about the heightened impact of horror in VR, and it’s also far from the first. Four years ago, Rebellion CEO Jason Kingsley warned CNBC that VR horror games risk being too intense because it “makes you no longer just a participant in terms of watching but you are present in this story.”

“The trouble is that means it’s more intense. You’re surrounded by it and immersed in it. Suddenly it becomes more real rather than abstracted,” he said. “Will a horror game give you the same physiological reactions as being in a horrific situation for real? Horror movies can be very scary or very cathartic or very terrifying, but horror VR will take it beyond that and do we want to be entertained like that?”

The challenge for Valve was even trickier, because Half-Life: Alyx isn’t a game like, say, Outlast or Soma that people play specifically for a horror experience. It’s a mainstream shooter, and that means it can’t be chasing away people who maybe don’t mind a little creepiness but have no interest in a full Frictional.

Jump scares can be extremely effective when used sparingly: I can still remember a couple of moments in Thief: Deadly Shadows’ Robbing the Cradle level that just about killed me. I’m not sure it would be quite so much fun while trapped in VR, though, and the risk of collateral damage is also significantly higher: Jumping out of a chair is one thing, but falling backwards over the coffee table into your big aquarium while flinging your thousand-dollar VR headset against the wall because get it off my actual face is a whole different matter.

It’s a big day for Half-Life: Alyx: If you’ve already read our 92/100 review, you can get caught up on how it takes City 17 to the next level, discover fun and interesting things to do in the intro bit, and (speaking of horror) watch James spiral into a nightmare of existential dread at the sight of a giant, sweaty bald man with a faucet sticking out of his skull.