We’ve always been waiting for the next Final Fantasy Tactics game. Is this it? Find out in our Triangle Strategy Review Roundup.

What is Triangle Strategy?

Triangle Strategy is a turn-based tactical strategy RPG game developed by Artdink and published by Square Enix and Nintendo, released on March 4, 2022, exclusively on the Nintendo Switch. The aftermath of the Saltiron War leads to conflict between the three countries of the continent – Glenbrook, Aesfrost, and Hyzante – throwing the protagonist, Serenoa Wolffort, right in the middle of a political drama that has led to war. Played in the same vein as games like Fire Emblem, players will be able to control various unique units that grow in strength after every battle.

In terms of flair and direction, though, the game has closer ties to the more recent Bravely Default and Octopath Traveler games. Triangle Strategy shares producers with these games in Tomoya Asano, whose touch shows itself in the game’s pixel art graphics style, the 2D-HD presentation, its penchant for complicated dialogue, and the game’s branching storylines and intricate plot.

While offering solid gameplay that is both challenging and fair, the enjoyable gameplay is marred only by its safeness. As many reviewers have noted, Triangle Strategy is a fantastic game, whose branching storyline and multiple endings add more replayability to an already lengthy game. However, it doesn’t really add anything to the formula. While the lack of innovation doesn’t make a bad game, it still disappoints a lot of hardcore fans who were expecting more from a large publisher, as games from the same vein are a dime a dozen in the market already. What it lacks in innovation, though, Triangle Strategy makes up in scale. The aforementioned branching storylines lead to completely different outcomes which effectively doubles the game’s longevity for completionists. The story is also epic in scale, and everything in the game exhibits this grandness, from the speech of its characters, its presentation, and the level design.

Nintendo World Report and Nintendo Life both gave the game a 9.5. In their review, Nintendo World Report says: “Whether you’re in it for the story, the gameplay, or the aesthetics, the total package is one for the ages, and from any angle the strategy is clear: add Triangle Strategy to your Switch library.” Nintendo Life, on the other hand, says: “Triangle Strategy is an absolute triumph for Artdink and Square Enix, a fantastic mix of satisfyingly strategic battles, an excellent choice-driven campaign narrative and top-notch world-building, all of which come together to form one of the finest tactical RPGs we’ve played in a very long time.”

Some other reviewers were less meek in calling out the game’s shortcomings, though. While still giving the game a positive review, they were more comfortable in knocking off a few points because of some issues. God is a Geek, which gave the game an 8.5 score, notes that: “If there’s a criticism of Triangle Strategy, it’s sadly with the battles. I want to be clear here: I didn’t skip a single optional thing at all, yet no matter what I did, each time a new battle would be offered, I’d be under-levelled. Often this would mean I’d fail the battle first time, then because you keep your progression from the failed battle, meant I’d be at the right level, with the knowledge I needed to succeed as well, second time around. Not for nothing, but those failed battles would be thirty minutes of lost time, easily, which isn’t great.” God is a Geek notes that it’s probably because they would play with all of their optional characters, attempting everyone to get up to the same level. However, they noted it odd that the game would punish players for fully engaging with everything offered.

Amidst the positive reviews, there were some who didn’t completely enjoy their time with the game. One of the lowest grades given for the game came from Digital Trends, which gave the game a 3.5 Stars out of 5. In their review, they say: “When Triangle Strategy is dishing out smart tactics gameplay, it’s a satisfying battle of wits. The emphasis on careful troop placement makes every move feel important. The problem is that players so rarely get to fight. A hyper-fixation on the inner politics of its world results in long swaths of monotonous dialogue with minimal interactivity. With thin customization, hardly any side-content, and a combat system that plays most of its tricks within the first few hours, it’s one battalion short of an army.”

Obviously, not everyone will enjoy the game’s plot, and for those who would not care about the game’s story, Triangle Strategy would definitely be a bore. For a game that lasts 30 hours for a single run-through, most of the game is sadly spent in dialogues and exposition, which harms the game’s pace and momentum, especially for those who’d like to go straight to the battles. Unfortunately, games such as this are best enjoyed in its full presentation – one does not simply skip the dialogue and expect to make good decisions when the game expects them to. Some mental space is required to hold all of the game’s lore and political intrigue – especially in one that has a lot of characters that – unique and interesting they may be – ultimately end up becoming forgettable.

Games Radar gave the game a 3.5 out of 5 as well, sharing their frustrations in the way the game handled its characters. Unlike Fire Emblem where you can customize your characters and spend a lot of time interacting with them, Triangle Strategy conveniently puts everyone outside of the main cast on the sideline. We’re sure that the lack of customization is a balance decision, especially since all of the game’s characters have skills and abilities that are usually unique to that character itself, but its downside was that none of the characters ever felt familiar or relatable. Games Radar’s review reads: “So while Triangle Strategy soars in its actual strategic battles, it stumbles a little elsewhere. Leading characters are easy to root for in the opening hours, but it’s a shame Square Enix takes so damn long to develop actual personalities outside of politicking for the majority of them. Duking it out on the battlefield is a joy, and the voting process for major story-changing decisions is an inspired spin on simply selecting a given story route, but it’s a shame there isn’t a solid roster of empathetic characters backing up this whole ordeal.” 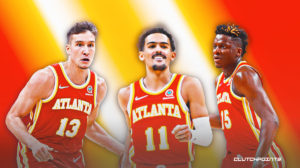