Today was Cyberpunk 2077’s original planned release date, but we got this ugly controller instead 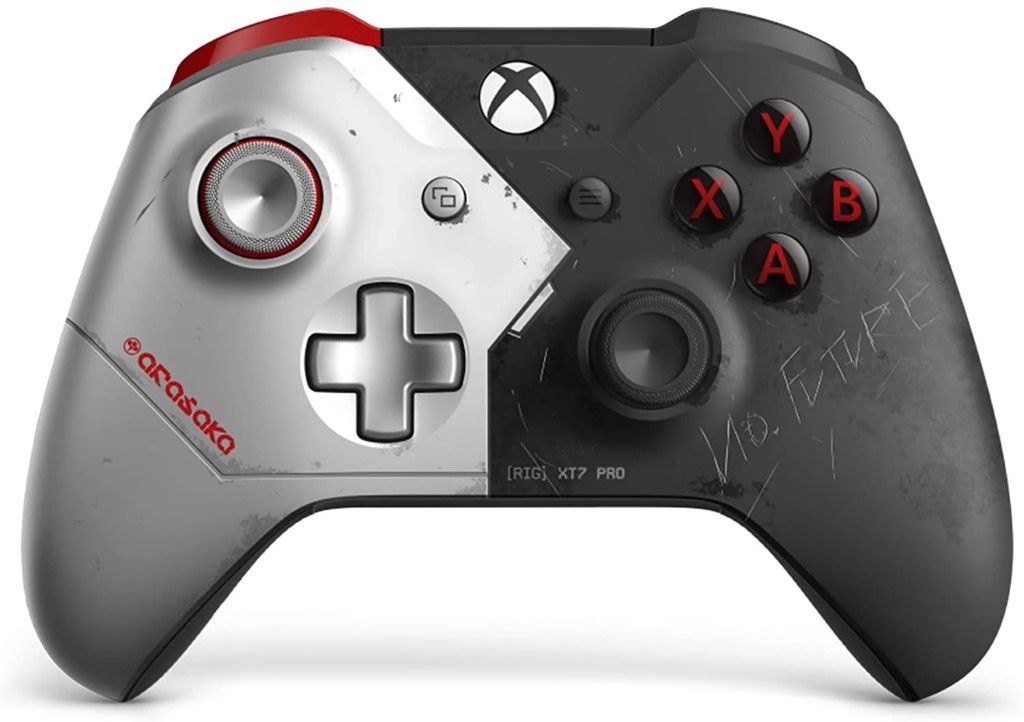 Today—April 16, 2020—is the day that Cyberpunk 2077 was meant to make its grand debut. Sadly, that’s not going to happen, but something is happening over on the Xbox website, which has been “hacked” in a very cyberpunk-looking way.

The word on the street, courtesy of Dudeman127, is that a Cyberpunk 2077 Xbox bundle will be announced next week. I don’t know if the box art he shared is accurate, but the silhouette of a console and controller are briefly visible when the cyber-tease video runs on the Xbox site.

More tellingly, a listing for a Cyberpunk 2077-themed Xbox wireless controller appeared on Amazon.ca today. It was quickly taken down, but Pure Xbox managed to capture an image and product description:

“Live the mercenary life with the Xbox Wireless Controller – cyberpunk 2077 Limited Edition, featuring a rugged design based on Johnny Silver hand and tech-enhanced insignia. This Xbox Wireless Controller immerses you in a future where technology is the key to survival. Button mapping allows you to customize your controller just the way you like it. Plug in any compatible headset with the 3.5mm stereo headset jack, And with Bluetooth technology, play your favorite games on Windows 10 PCs, tablets, laptops, and mobile devices.”

Xbox bundles aren’t really our thing, but Xbox controllers are something else entirely: They work with PCs, and they rate a spot in our list of the best controllers for PC gaming.

My complaint about this one, for a specialty controller, is that it’s kind of bland. The Arasaka logo on the left is cool, but the “no future” scratched into the right grip makes me think of Terminator, not Cyberpunk. (And yes, Terminator is “no fate,” but that’s the kind of thing that’s easy to mix up at a glance.) It’s just not very distinct in my eyes; it looks old and worn, but not in any way that immediately conjures up images of the game it’s supposed to represent. Given the breadth of inspiration available from the Cyberpunk setting, I would’ve expected more. Something flashy and neon, with maybe a little bit of Keanu on it, or even Lizzy Wizzy, staring up at me from behind the thumbstick.

Arasaka is a major Japanese mega-corp in the Cyberpunk setting, by the way, and will apparently play a role in Cyberpunk 2077.

Arasaka Corp. is a family firm from Japan. They’re known for providing corporate security, banking, and legal services. One of the most influential megacorporations in 2077, their weapons and vehicles are among the most sought after by police and security forces. #Cyberpunk2077 pic.twitter.com/ni2jjbeUZfApril 15, 2020

There is the possibility that April 20 will bring us more Cyberpunk 2077 reveals than just a new Xbox bundle, so we’ll be paying close attention to see what shakes out.

Cyberpunk 2077 is now scheduled to come out on September 17. Despite the impact of the ongoing COVID-19 outbreak, CD Projekt recently said that release date remains on track.