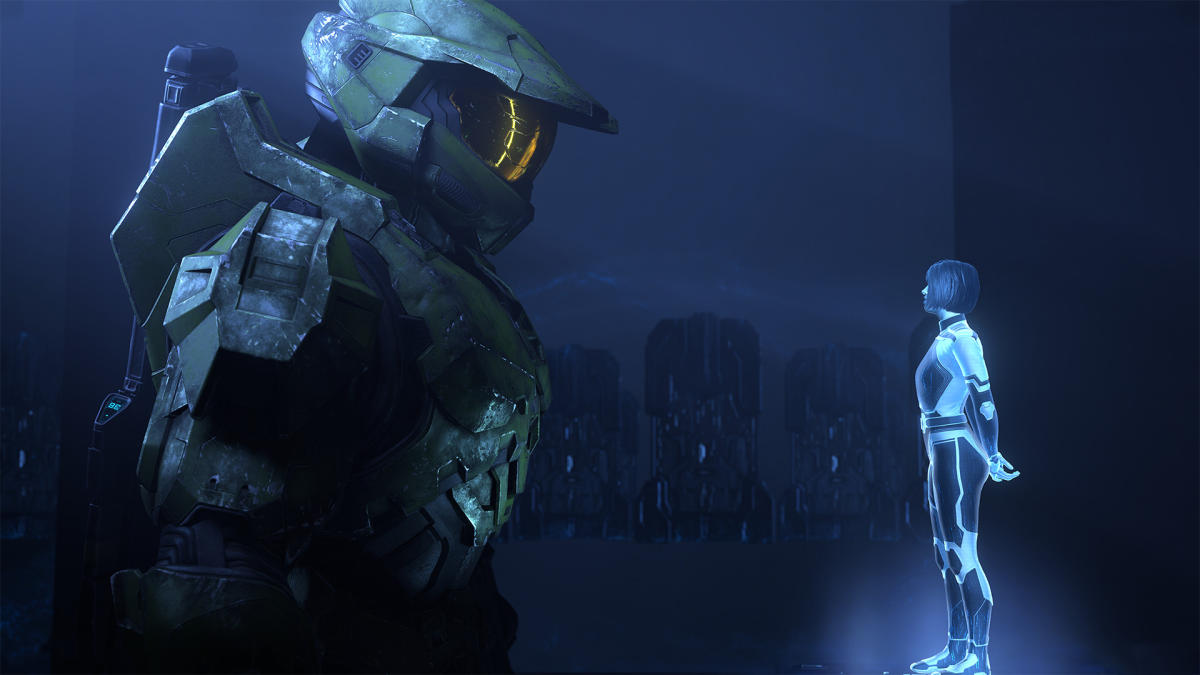 We may receive commission from purchases made via links on this page. Pricing and availability are subject to change.

It’s almost spring, and we’re already starting to enjoy some warm, sunny days. But April is also on its way so you should expect some rainy afternoons stuck inside. Why not prep for these days in advance by stocking up on great video games that will take you on virtual adventures when it’s not very nice outside? We’ve got hackers, Vikings and even ghostbusters in this week’s picks, with prices starting as low as $12.

Do you get tired of the same old muscle-bound heroes in your games? In Watch Dogs Legion, you can play as anyone — and yes, I mean anyone. Whether it’s the cabbie driving down the street or the old woman waiting for the light to change, you can recruit anyone into your hacking group and explore their unique backstories and skills. This intriguing title is down to a super affordable $12 at Walmart, a huge 80 percent discount from its price in the PlayStation store!

Reviewers call this title “thoughtful, challenging but violent,” and another player says they haven’t even progressed very far in the story, because “the open world is so much fun on its own.”

Sounds like you’ll get a huge amount of fun for the money with this massive game!

Vikings are cool, and we’re not just saying that because they live way up north! This epic title lets you live the life of a Norseman… or Norsewoman (you get to choose your gender). You can go on raids, fight vicious battles and experience a grand, sweeping saga in the Assassin’s Creed universe. But you don’t need to be familiar with the series to get started — in fact, this game is a great starting point for this immersive series, with a fun history lesson to boot!

Gamers certainly love it, with one shopper calling it “one of the best open-world games I have played.” That’s because “there is so much to do in this game, so many ways to build your character, so many ways to engage in combat. The graphics are amazing and finally a game where you can play as a Viking! This game has over 100 hours of gameplay. Highly recommended!”

The Riders Republic is the ultimate playground for fans of extreme sports. BMX, snowboarding and even base jumping are here for your action-packed delight, traveling through gorgeous environments and collecting and wearing killer threads in the process. This is a pretty recent title from a few months ago but it’s already on sale. Save $30 when you order a copy from Walmart, and you’ll be exploring canyons and forests on your trusty bike in no time.

This mature-rated game is quite the family affair, as the Greek-deity-battling Kratos decides to leave behind the world he knows in favor of the colder and quieter north to raise his son in peace. But that tranquility doesn’t last long when he and the kid get involved in the affairs of gods and giants, forcing this former god to pick up his ax once again. The greatest-hits edition of this acclaimed title is now just $20; play it before the new one comes out later this year!

Players are super enthusiastic about this one: “This game has an epic storyline following Kratos and his son, which magnificently intertwined with the previous God of War games. You will appreciate the graphics and character developments. You will be like a fish on a hook and will not be able to set your remote down. Buy it. Play it. Love it. Can’t wait for the next one.”

Sounds like you’re getting real bang for your buck!

In this role-playing game, you’re a colonist looking for a new life on another planet… except your ship goes missing and reappears 70 years later, when the colony you were headed for is in dire straits. And you have special powers, now, too. Save your new planet, explore other worlds, and make choices that may determine the fate of the galaxy. You know, the usual stuff you do in space.

Gamers love this “fantastic RPG” that’s “such a blast,” with one player saying he’s “in the middle of my second play-through now!” And another gamer says “The story is very well written. The companions are fun and their quests are a blast to do. […] I have put so much time into the game and don’t think I am gonna stop anytime soon.” For only $15, it sounds like you’ll really get your money’s worth with this one.

While you wait for season three of the Netflix show, why not get better acquainted with the world of the Witcher through the video games that made the franchise popular in the United States in the first place? All the characters you love are here — Geralt, Yennifer and Ciri — and now they must face off against the powerful and brutal Wild Hunt. Instead of just watching the action you get to play a direct part in it here, and right now it’s only $20 at Walmart!

Are you a big fan of westerns? Do you ever wish you could ride horses, battle outlaws and roam the wide-open frontier? Well, Red Dead Redemption 2 is a game that will let you do just that, dropping you into a compelling story set in an open world where you call the shots. Fight bad guys, hunt animals and even play a few mini-games like poker and blackjack. You can even make friends with your horse.

Players are in love with this title, calling it “one of the best games ever made.” One player had this to say: “A very emotional journey and a highly entertaining and beautiful world to actually live in. I feel attached to the in-game world and characters. This is a generation-defining game.”

Halo just turned 20, but that’s no reason to feel old. Heck, there’s even a new show premiering on Paramount+ next week! While you wait for the premiere, why not enjoy the newest addition to the game series, with its expansive open-world structure, crazy new abilities and amped-up multiplayer? This was one of the top games of 2021 and it’s guaranteed to still be hot in 2022. Right now you can save $12 on this title, but at any price you’re sure to get your money’s worth thanks to the sheer number of ways to play this soon-to-be-classic.

Players call it “the best Halo yet,” with one happy customer adding that “as a Halo enthusiast since day one who prefers storyline first and online gaming later, in my opinion, this is the greatest depth, thought, creativity and production work that I could imagine; that I have been hoping to see from the Halo franchise for quite some time.”

South Park: The Fractured But Whole

This might sound a little crazy, but this role-playing game based on the crude cartoon from Comedy Central is actually really good. The city of South Park is fun to explore, the dialogue is razor-sharp and there are great items to discover. The combat is also awesome. This package even includes the first game, The Stick of Truth, as a bonus! We can’t recommend South Park: The Fractured But Whole enough, and right now you can give it a shot for only $15.

Shoppers agree, with one saying “If you like the show, you’ll love the game. All the characters from the show coming together for a hilarious game that’s just a good time.” But even if you aren’t the biggest fan, The Fractured But Whole also “challenges your problem solving and analyzing skills,” and “it’s funny and there’s so much to do!” And you don’t have to wait for the next season to enjoy this adventure!

Breath of the Wild is considered by many to be the best Zelda title yet, and one of the best Switch titles ever — so if you still haven’t picked a copy up, it’s not too late. Right now you can snap up this expansive, gorgeous adventure for only $40, a nice $20 discount.

Reviews are, predictably, glowing, with players calling it a “beautiful game with so much to do,” and “a great way to waste your time away.”

Even first-time players have a lot to say: “I’ve never played any Zelda games before, but I had a general idea of what they were like….I was kinda worried I wouldn’t understand or “get into it,” but I was wrong! So far the graphics and the open world has so much detail and epic views that I fell in love as soon as I looked over the mountain peak. If you’ve never played Zelda and you’re thinking about purchasing this game, do it!!”

Ni No Kuni: Wrath of the White Witch

Do you like exploring expansive worlds, meeting strange and wonderful creatures and getting sucked in by a compelling story? Then Ni No Kuni: Wrath of the White Witch is the game for you. It combines the charming animation style of movies like My Neighbor Totoro with the thrilling adventure you’d expect from a Zelda title, and right now it’s only $25 at Walmart — a sweet 50 percent off.

Players love Ni No Kuni, with one enthusiastic reviewer calling it “honestly the best game I’ve ever played. … I’m almost done with it now and I truly loved all the scenes it had.”

It’s a great way to spend the rest of March!

Mario might get the lion’s share of attention, but sometimes his taller sibling Luigi gets to go on adventures of his own! Do a little ghost-busting at the Last Resort hotel, vacuuming up spooks and specters with the help of Luigi’s icky-sticky sidekick Gooigi! You get to try all sorts of new abilities and tools, and you can even play side-by-side with a friend in co-op mode!

Gamers really love this title, with one going into detail about their experience: “Literally can’t stop talking about how much I love this game. […] You can interact with pretty much everything and for someone who loves games where you can collect things (money mostly in this case), it’s a dream, especially when the money is in places [like] the leaves on a plant. Going from room to room is seamless. Really impressed when you go in and out of the elevator before pushing any buttons because the transition is crazy. The game guides you very well and makes sure you have a chance to find everything there is to find.”

The reviews quoted above reflect the most recent versions at the time of publication.

Looking for more great Walmart deals? Check these out: