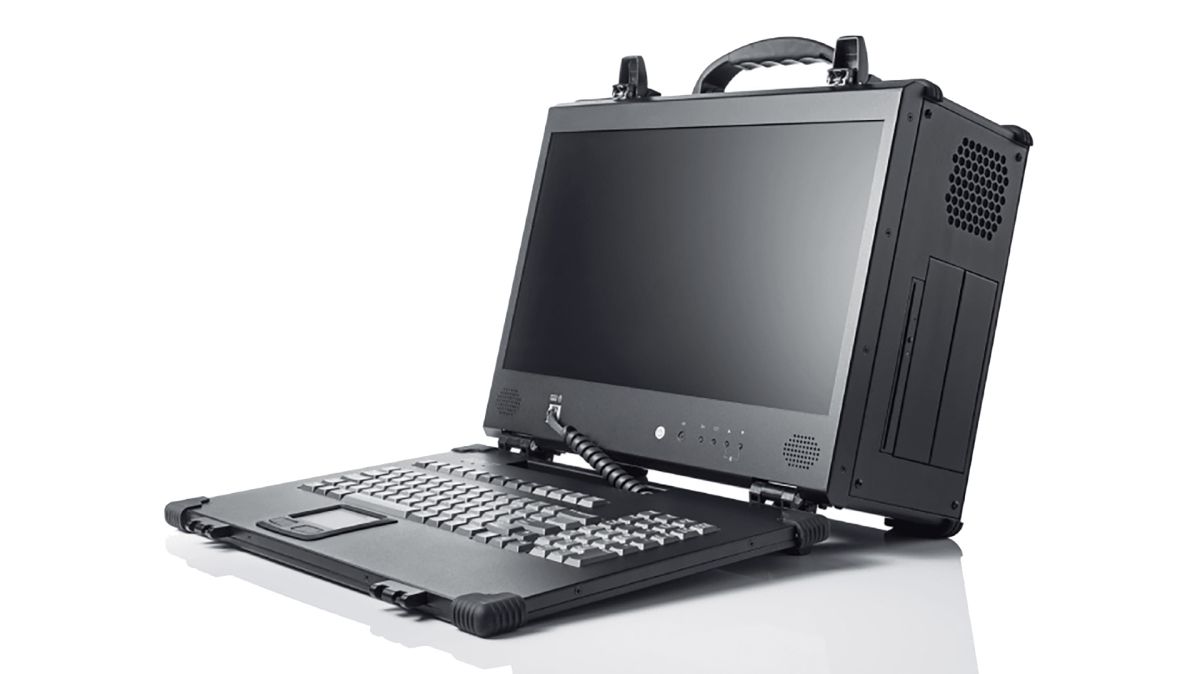 It’s tough to coming to terms with being a ’90s kid sometimes. We missed out on some great experiences: parachute pants, double denim, those jackets that look like the interior of a local bus, and carrying your PC or phone around in a gigantic carry case. Heck, sometimes the PC itself was the carry case. Some good news, however, those PCs never died—they only got more powerful.

Picture this: you sit down in a meeting alongside your colleagues. They pull out their Surfaces, iPads, phones, and whatever else. You place a briefcase down on the table with a deafening thud. Everyone turns to look at you. You pull out your kettle plug and look around for a plug socket. Ah, you’ve spotted one. Jill is in the way. Politely ask Jill to move aside so that you may plug in your computer. She shuffles away. The room is completely silent. You connect the kettle plug to your PC and start up your machine. The only sound now is the that of multiple fans whirring to life—you nod to your boss for the meeting to commence.

This could be you for just $7,997. And if you’re not promoted to CEO in a week, you get your money back.

Spotted over on Reddit (via Tom’s Hardware), Mediaworkstations offers this PC with a full range of GeForce graphics cards to choose from, right the way up to an RTX 2080 Ti. There’s even a dual EPYC CPU version for a little under $10,000.

Not that you need a GPU, anyways. The 64-core/128-thread 3990X is able to run Crysis without any dedicated GPU—not well, but it runs.

Now there is at least one inconsistency on the Mediaworkstations page, the motherboard listed is the ASRock Taichi X399M—and not the TRX40 motherboard that would be required for a 3rd Gen Threadripper machine. That’s led our Alan to believe the whole thing isn’t actually real.

That’s not helped by the fact a PC such as this is a relic of a bygone era in many ways. However, the system is intended for media work. Not content creation stuff—that which a welterweight desktop replacement would probably suitably take care of—but uber-demanding movie-grade media work on the fly.

The website is filled with success stories from such types, including a CG artist for Call of Duty: Modern Warfare and a visual effects artist for Star Wars: The Phantom Menace.

Sounds legit, right? But maybe don’t take my word for it—even the original poster on Reddit has since deleted their account. That doesn’t bode well. We did ring the company up to double check and, while it was 7:45am in their neck of the woods, the voicemail confirmed the line was for a company named Mediaworkstations.

Glad we could clear that one up… sort of.