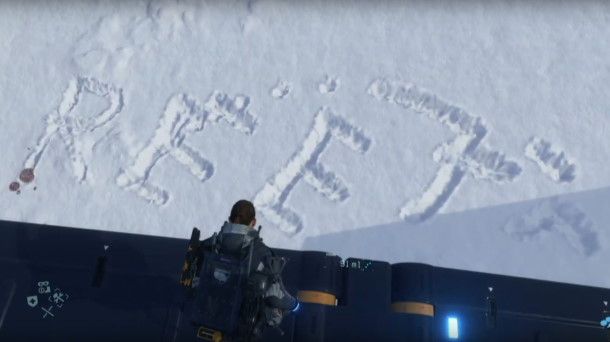 Back in the summer of 2019, when Death Stranding was still a PlayStation 4 exclusive, we held out hope that Geoff Keighley’s Gamescom Opening Night Live show would finally bring us confirmation that a PC version was in the works. Instead, we got Norman Reedus having a leak. It was all very weird, and got weirder as the night rolled on and Hideo Kojima confirmed that you could use Norman Reedus’ dong as a weapon.

One obvious question to emerge from all this was, why? Why would you not only include this in your game, but make such a big deal about it in pre-release promotions? YouTuber Reetae27 has finally answered that question to my satisfaction: Because it means you can write your name in the snow with pee.

Every Canadian child can tell you that peeing your name in the snow is a tougher task than it sounds, and it turns out that doing it in Death Stranding is even more complicated than it is in real life. In a masterfully entertaining deadpan, Reetae27 tells a tale of experimenting with snow deformation, scouting locations, building a massive piss-platform in the middle of nowhere, and finally completing his epic undertaking, a process he told Polygon took roughly 15 hours spread out over two weeks.

It would’ve taken even longer if Death Stranding conformed to actual human anatomy: Norman Reedus can sling around 1000 ml of urine in Death Stranding, while typical real-life human bladders are good for less than half of that. “Fortunately, Kojima is not confined by such things,” Reetae27 said.

Alas, PC players will have to wait a little longer than expected to start signing the snow themselves, as earlier this week the PC release was delayed until July . The video concludes with some helpful advice for when the big day arrives: Don’t get too hung up on staring at the bladder meter, which is a thing that actually exists in this game, and lean to the left a little bit—it’ll help with visibility.