This fanless CPU cooler is an absolute unit, and also delayed until next year 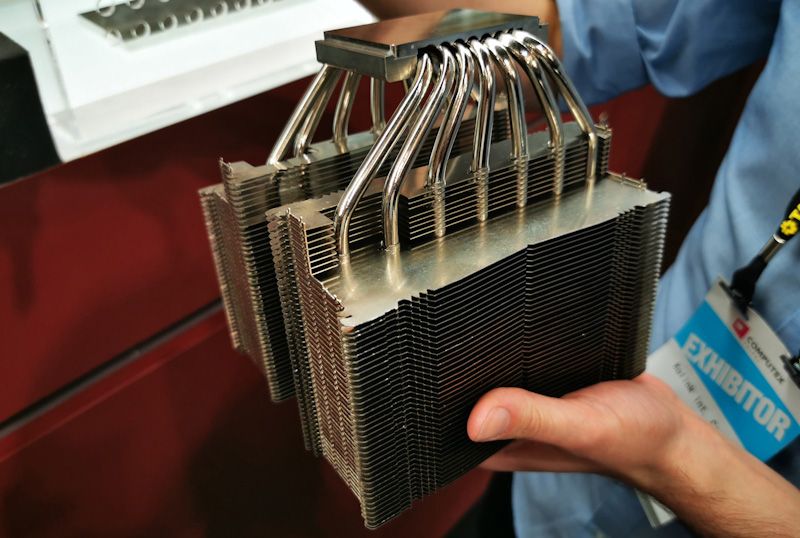 Back at Computex last year, Noctua showed off a massive prototype CPU heatsink built for passive cooling (as in, no fans attached). The original plan was to release the cooler sometime this year, but Noctua’s updated product roadmap (via FanlessTech) now has it coming out in the first quarter of 2021 instead.

The reason for the delay is not clear, but at least it’s not being scrapped altogether. There’s never a guarantee that prototype products shown off at trade events will see the light of day, and this beast of a cooler really needs to get released.

I’m intensely curious to find out how the finished product will fare on high-end CPUs, including Intel’s sometimes toasty Comet Lake processors. At Computex, Noctua said it could bring the chill to CPU loads of up to 120W inside a fanless case with “good natural convection.” And if cramming this into a case outfitted with quiet fans for active airflow (or if attaching a fan directly to the cooler), that number gets bumped up to 180W.

Comet Lake was not available at the time this cooler made its debut in prototype form. Instead, Noctua demonstrated the big and heavy (around 1.5 kg) in action sitting atop the 9900K on a Asus Prime Z390-A motherboard. While running Prime95 in a “warm Taiwanese climate,” CPU temps hovered around 94C at full load, according to our friends at Anandtech. That’s definitely warmer than many of the best CPU coolers today—the price of silent operation.

That’s a bit on the high side, but not too shabby, considering the combination of a top-tier CPU with a completely passive cooling solution.

I think having it keep temps in check on a higher end Comet Lake CPU will be a tough ask, at least without any fans coming along for the ride. But that’s based on what was shown and demonstrated at Computex—it’s entirely possible that the delay is to make it even bigger and more capable, but we’ll have to wait and see.