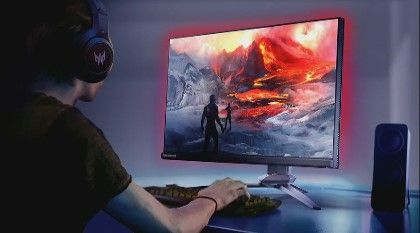 During the gaming segment in the [email protected] 2020 live stream, Acer showed off the suite of upcoming Predator gaming products, which included, but not limited to, new gaming desktops and laptops, an energy drink called Predator Shot, and a gaming chair with built-in Bluetooth speakers and massager. But what got me particularly giddy was the Predator X25 gaming monitor that boasts a ridiculous 360Hz display.

The X25 is a 25-inch 1080p IPS gaming monitor that’ll hit refresh rate of 360Hz, allowing for some ridiculously smooth gameplay. Do I need a 360Hz gaming display even though I’ve been using a pretty good 240Hz? Probably not. Do I want one also though I most likely wouldn’t be able to tell the difference when I play Call of Duty: Warzone? Hell yeah.

The G-Sync compatible monitor uses LightSense, which, according to Acer, “adjusts its brightness and color temperature automatically based on environmental light.” Another neat feature is the Adaptive Light tech which changes the ambient lighting based on what you are playing, which looks neat and helps with reducing eyestrain.

The Predator X25 will be available in North America and Europe from November, with an eye-watering price tag of $1,100. Yes, eleven hundred dollars for a 1080p gaming screen. Ouch.

That’s a bit rich for my blood, but the Predator XB3 gaming monitors with 0.5 ms response time and HDR 400 will be coming out in September starting at $429.