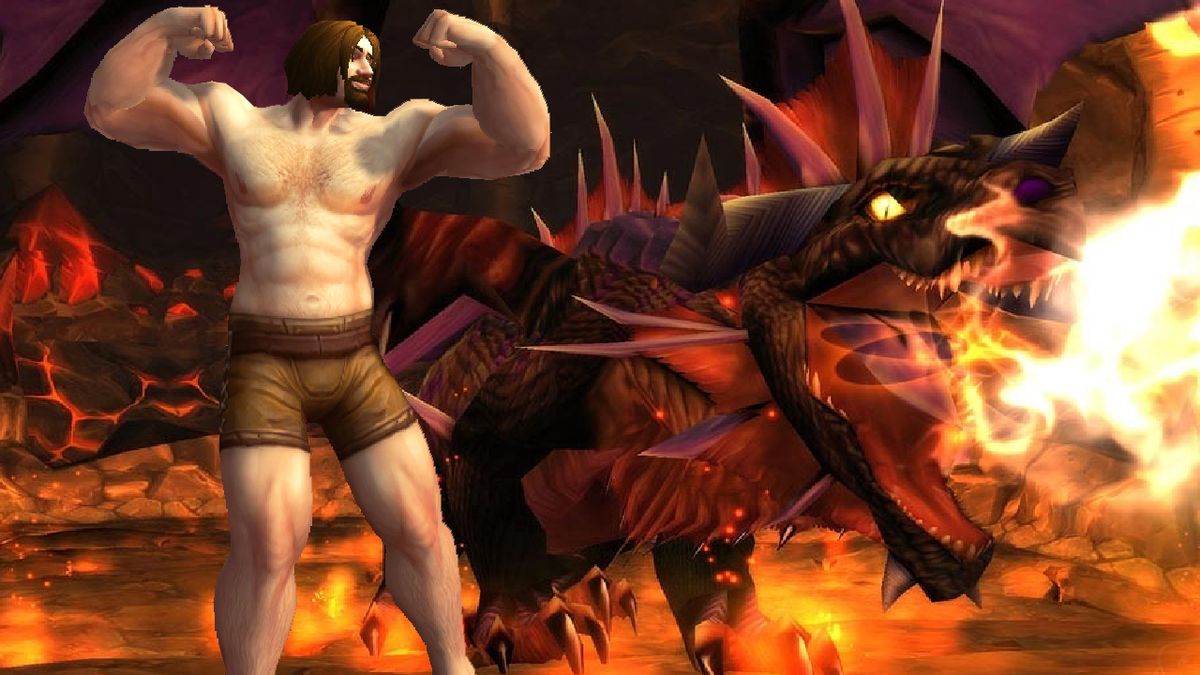 Onyxia, the broodmother of the Black Dragonflight, is one of World of Warcraft’s most memorable raid bosses ever. Back in 2004 she was one of two raids first released with the MMO’s launch, and her Bellowing Roar, which would inflict a fear aura that set the entire 40-person raid running away in terror, was despised because unprepared raiders would tend to flee into the dozens of eggs surrounding her lair. Each time an egg was touched, it would break and spawn a whelpling, and enough of those added to the battle would quickly overwhelm a group.

Onyxia became one of WoW’s most notoriously difficult fights, birthing an entire generation of still-funny memes. Earlier this week, however, a team of 40 World of Warcraft Classic players finally took their ultimate revenge by not just defeating her, but by doing it entirely naked. No weapons, no armour, no trinkets. Just fists, a lot of frost bolts, and a ridiculous amount of coordination.

The incredible feat happened on the Zandalar Tribe European server, with players from a variety of guilds participating in the achievement. So far I’ve found two videos of the kill, one from YouTuber Sallamos showing the point of view of a priest, and another from ‘bacons lime’ showing the fight from the perspective of a frost mage.

If you’re wondering how this is even possible, the answer is a pretty simple combination: A lot of consumables, buffs, theorycrafting, and frost mages. The 40-person raid group had at least 12 frost mages, with the rest being mostly other spellcasting classes like warlocks and the necessary number of healers to keep everyone alive. Only a few melee classes were present, including one tank who would keep Onyxia’s attention and stop her from attacking more vulnerable players. The reason for this, explains Wowhead, is because spellcasters aren’t nearly as affected by having no gear or weapons as melee classes. Plus, during the second phase of the fight, Onyxia takes flight, so having ranged spells is a must.

The challenge is that World of Warcraft Classic’s combat system is much more complicated than it is in the modern incarnation of the game. In order to keep Onyxia from unleashing one of her deadly attacks on the raid and wiping them out, the single paladin tank, named Berit, had to keep her attention the entire time. But without weapons and armor, tanks can’t generate enough “threat” to keep bosses focused on them.

That’s where the theorycrafting comes in. The raid was able to devise a clever way to help Berit piss off Onyxia enough that she’d only attack him. The method is esoteric, but the gist is that the frost mages initially would hit Onyxia with the weakest version of their frostbolt spell, each generating a little bit of aggro for the caster. The moment those spells all hit, Berit could cast Greater Blessing of Kings on the mages, a buff that increases their stats but, essentially, also generates a ridiculous amount of threat Berit needs to keep Onyxia’s attention.

To survive an attack without any armor, every member of the raid is maxed out with a selection of special buffs that are earned through a variety of means, including defeating world bosses that spawn in different locations across Azeroth. Many players also drank potions and used group-wide spells to increase their stats. The effort and math to coordinate it all must have been extraordinary.

But all that planning still didn’t make for a smooth fight. Watching the video above, there’s multiple instances where everything almost goes completely sideways. Early on, one player accidentally steals aggro from Onyxia, causing her to turn and face half of the raid group. If that happened just as she was using one of her area-of-effect attacks, it could’ve been a slaughter. Later on, Onyxia’s Bellowing Roar catches a few players off guard and sends them careening into the hatchery, but players are quickly able to dispose of the whelplings before they can do too much damage. It’s a thrilling fight, and you should definitely watch the full video.

What really stands out to me, however, is how a feat like this would have been unimaginable back when World of Warcraft was first released. WoW Classic’s launch created a lot of interesting discussion about whether the olden days of Warcraft were really as hard and challenging as players remember, or if the truth was people just sucked at MMOs back then and didn’t know what they were doing. Watching this video, I’m convinced it must be the latter. Those 16 years people have spent exploring Azeroth have turned them into mix-maxing, theorycrafting gods.