Tales From the Loop is getting a board game adaptation 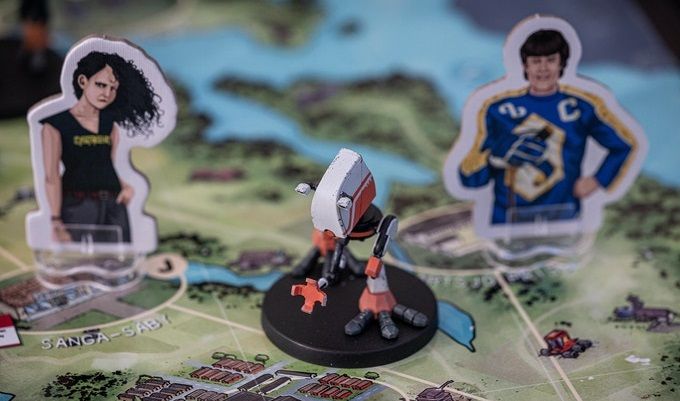 The art of Simon Stålenhag, who turned his striking images of an alternate ’80s and ’90s Scandanavia into a pair narrative art books, has inspired a tabletop RPG and an Amazon Prime series, and next year a board game will be added to the list.

Tales From the Loop – The Board Game once again juxtaposes the mundane and the weird, putting players in the shoes of a group of archetypal suburban teens investigating unusual events created by the titular Loop, a particle accelerator built under the town.

It looks like it still retains lots of RPG elements from its predecessor. The teens have special skills, weaknesses and unique items, and they can find more by rooting around and investigating. Maybe you’ll find a robotic glove somewhere in the woods. Depending on the scenario, you’ll need to investigate different rumours, eventually uncovering a bigger threat that you have to stop.

Along with the weirdness created by the Loop, this alternate ’80s is also full of autonomous machines. They’ve got their own AI routines and react differently to players depending on their state and role. There are Workers, Wardens, Watchers and Warriors, and luckily they can all be hacked.

The mundane side of Stålenhag’s world is reflected in the teen’s school and home lives. They’ve got families and friends, with relationships that the game tracks, as well as school to attend and chores to do. Curfews can be broken and chores can go ignored, but there are consequences for not playing by the rules.

It’s hard to get people to commit to a tabletop RPG, so I’ve hardly managed to get use out of it. Thankfully it doubles as a brilliant art book, so it’s not all bad. Talking people into just committing to board game for a couple of hours, however, is probably going to be a lot easier.

You can see how it comes together in the demo below.

Tales From the Loop launched its Kickstarter campaign today, and only a few hours in it’s already hit its goal. It’s expected out in May 2021, but you don’t need to wait, or even pledge, to try it out. A print and play version is available now, containing the board, cards, markers, rules and everything you need to play, as long as you’ve got a printer.

You’ll need to wait until next year to get the fantastic machine miniatures, though, which are honestly a bit too adorable to be threatening. I love them.