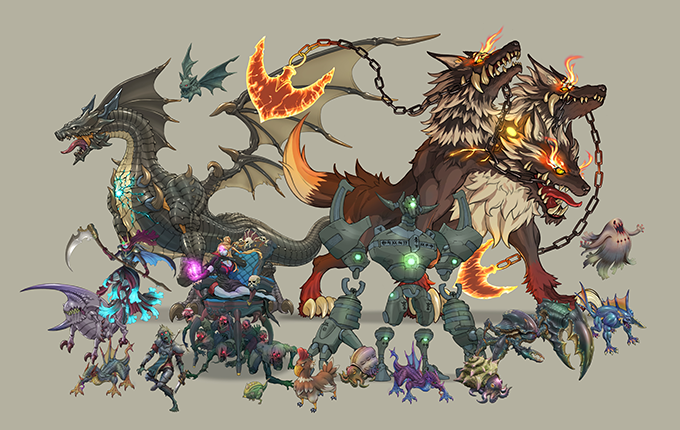 With Konami showing no signs of releasing Suikoden from purgatory, some of the original development team have banded together to create their own JRPG with 100 recruitable characters and the other trappings of the classic series. The Kickstarter for Eiyuden Chronicle: Hundred Heroes launched on Monday and was almost immediately completely funded.

Eiyuden Chronicle will see you exploring the continent of Allraan, apparently a diverse land that’s been “shaped by the alliances and aggressions of the humans, beastmen, elves and desert people who live there.” One nation, the Galdean Empire, has grown more powerful than its neighbours thanks to its discovery of magic-amplifying tech, and now it’s on the hunt for an artefact to enhance its power even more.

It’s a 2.5D affair, with handsome PS1-era sprites wandering around more detailed, lavish environments, evocative of Octopath Traveler. You’ll explore in real-time, but the fights are turn-based battles that let you bring in six characters to duke it out for you. Characters can also learn special customisable abilities that they use on their own, some of which can be linked up to other characters’ abilities. As you recruit more, you’ll be able to mix and match to find new synergies.

Speaking of recruitment, you’ll be able to find 100 characters to join your cause, ranging from warriors to bakers. Some you’ll throw into battle, but you’ll also need to expand your fortress town by putting your new mates to work. Eventually you’ll be able to bolster it with walls, create new weapons, build farms and develop businesses like restaurants and a blacksmith. There’s cooking, too, with recipes to learn and dishes to create in the cafeteria. If your cafeteria gets popular enough, you can turn it into a franchise and open up new places across Allraan and compete with rival restaurants.

It all sounds very good and very Suikoden, so it perhaps shouldn’t be a surprise that it managed to sprint past its $500,000 goal. It only took a few hours, and since then it’s been barrelling through the stretch goals, which include the aforementioned fortress town mode and cafeteria minigame. The stretch goals go up to $1.8 million at the moment, leaving four more to go, and I wouldn’t be surprised to see that target reached today.

Development is expected to take at least a couple of years, with the current estimated release date being October 2022.