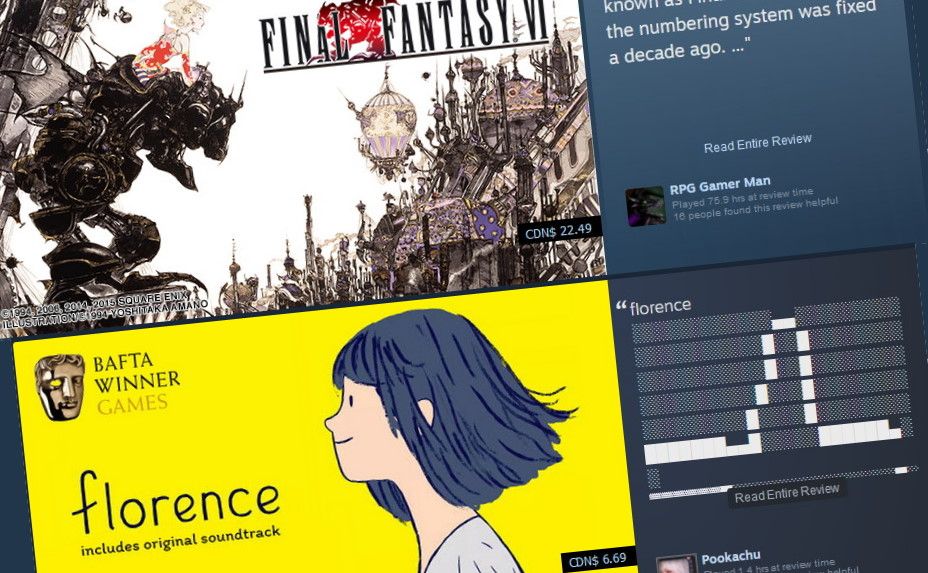 Today marks the one year anniversary of Steam Labs, a sort of ongoing PTR that Valve uses to test and iterate on new Steam functionality before rolling it out to everyone. To celebrate, Valve posted an update that looks back on a year’s worth of experiments and teases a little bit about what’s coming next, and finally launched the Community Recommendations storefront feature it began testing last year.

“Community Recommendations showcases your reviews by featuring them right on our home page for everyone to see,” the update says. “The result brings community energy to the store, enabling users to keep abreast of the titles players are currently enjoying, and why.”

That sounds straightforward enough, and many of the recommendation blurbs are useful. But some of them are gold of a different sort: The system appears to employ the opening few lines of user reviews without concern for what they actually say (or are), and that leads to some pretty interesting places.

Robin said today that Steam has become exhausting, and I’m starting to think he might be on to something.

Moving on, along with a rundown of features we’ve looked at previously, including the Interactive Recommender, Play Next, and improved search functionality, the update also touches on a couple of Steam ideas that didn’t make it to the finish line. The Automated Show was intended to be a fully-automated system for “creating an entertaining production about games,” with features including voiceovers and “theme-driven automated curation,” and running times of two to 30 minutes.

But the longer format wasn’t working, “as viewers typically bailed within the first few minutes of those shows,” Valve said, and when it wanted to focus on a specific topic such as the Steam Awards, it found that doing it manually was a better way to get the job done anyway.

The planned Deep Dive feature suffered a similar fate: The idea of using algorithms to recommend games based on an initial selection “was a tough sell,” although it did enable Valve to further tweak Steam’s tagging and recommendation systems, inspired tools to “identify and organize games associated with big events,” and led to Valve considering “new navigational systems” it plans to “experiment with in Labs” in the future.

The Steam News Hub experiment is still in the works, more work is being done to Steam’s search feature, and the Micro Trailers feature remains in development. Valve also said that it’s looking at new ways to browse Steam, with “new points of entry, more compelling ways to browse, and more tools to filter while browsing,” and it’s still open to suggestions from users.