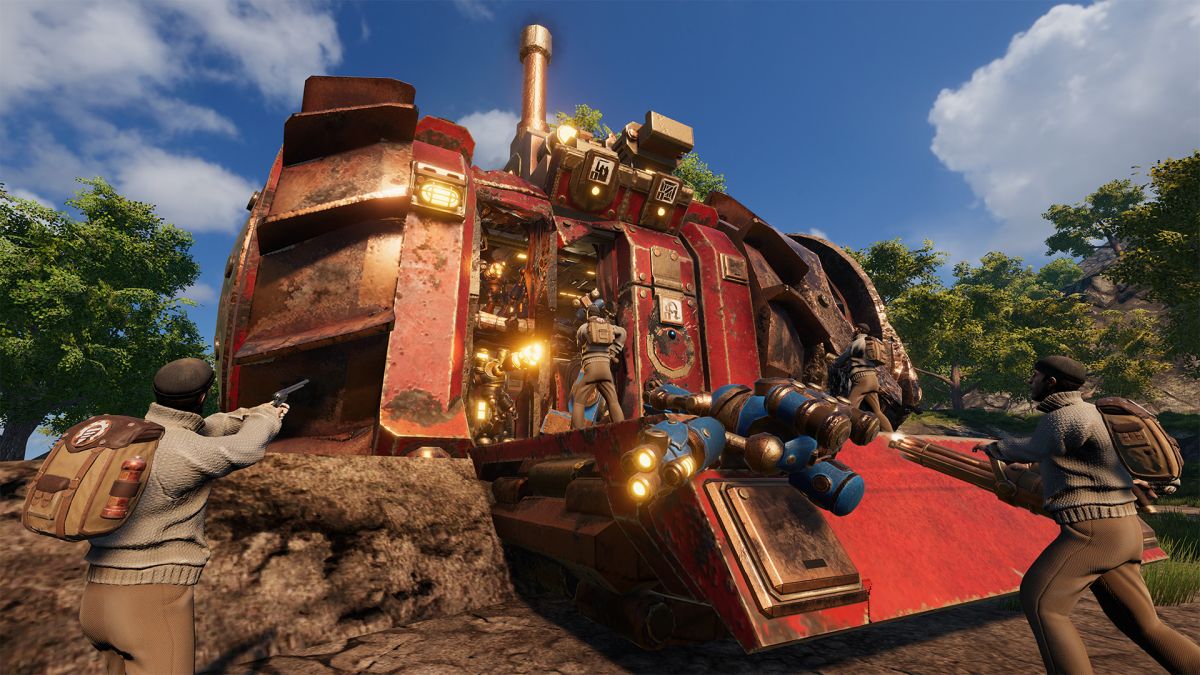 Volcanoids is a first-person “steampunk shooter survival” game in which players explore a rocky island, build giant drillships to tunnel through it, and deal with explosions caused by a hostile race of robots that uses the nearby volcano as an energy source, and who apparently don’t take too kindly to your mucking around with it. We lamented the inability to actually drive the drillships around when it was announced in 2018, but even so it looked “pretty darn cool,” particularly since it promised to support co-op and PvP play as well as solo survival shenanigans.

Co-op play wasn’t supported when Volcanoids went live last year, but as of yesterday, it’s there.

“The most requested feature of all” was finally rolled out in an update that went live yesterday. “From now on you will be able to crew up with up to 3 other friends to commandeer drillships, scavenge, build, fight and survive together!” developer Volcanoid said. “Apart from the new co-op mode, there are also new worktables, bunk beds, items, and other improvements we made based on your feedback.”

In co-op play, one person will serve as the host and “crew captain,” while others will connect through the “join game” screen at the startup menu. In-game quests are fully synchronized through all players, so everyone can take part in group activities including running the drillship, gathering resources, or fighting the COGs—not the Gears guys, but the enemy robots.

Currently, the crew can only own one drillship, although that’s planned to be expanded in future updates, and since the game runs entirely through the host, the crew captain is the only one who can save and load games—and if the captain ends the game, everyone else will be automatically disconnected. Crew members can log off intentionally by using new bunk beds, which will safely store your inventory while you’re “asleep,” and if you’re accidentally disconnected your character will remain in the game for around five minutes, giving you an opportunity to reconnect and pick up where you left off—although your unmoving meatsack will be defenseless against misfortune, so don’t dawdle.

The update also makes changes to player deaths: After being killed, players will now respawn in either the submarine or a drillship, if you own one, while their inventory is left behind in a backpack. It can be retrieved, but rather like your disconnected corporeal form, it can also be destroyed by an eruption or swiped by a robot, so you’ll want to be quick if you want it back.

To celebrate the release of the big update, Volcanoids is on sale for 25 percent off until May 27, dropping it to $15/£12/€13. The full update notes are below.