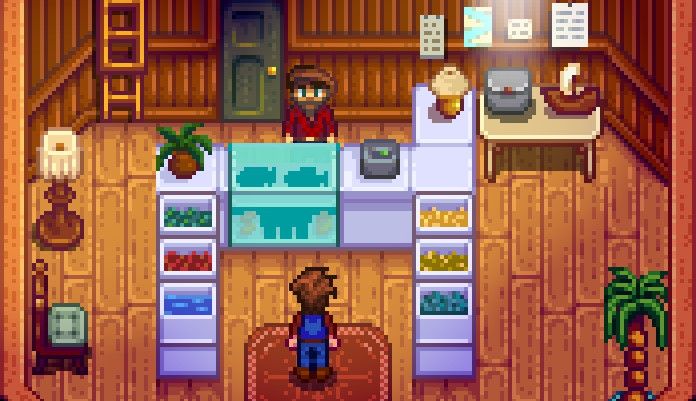 Stardew Valley creator Eric Barone is working on a couple of new things, but he’s still working on his old thing, too. Barone confirmed on Twitter today that the Stardew Valley 1.5 content update he announced in February is still in development, and more interestingly he also teased a little bit about what it’s going to include.

Stardew Valley 1.5 update… notice anything new in Willy’s shop? Progress on the update is coming along steadily. It’s still in a “nose to the grindstone” phase, but some good milestones have been met. This update adds a significant new piece of end-game content and much more! pic.twitter.com/FmjgDJnqYOJuly 6, 2020

If you’re not sure what he’s talking about, compare the image in the tweet with the one below, courtesy of Waifu Simulator 27 on YouTube. Notice the green door in the newer pic? Barone dropped no hints about what’s behind it, but there’s plenty of speculation in the replies.

The obvious guess is that it’s the back room to Willy’s shop, maybe a combination bedroom/storage room. But some fans have theorized that it’s actually his secret marijuana farm, or a passage to the fish underworld, or a gateway to a small Animal Crossing-style island. Personally, I think it’s a magical portal to Sigil, the City of Doors, presaging the announcement of a Stardew Valley–Planescape crossover that will be the biggest multi-franchise crossover event in videogaming history!

Okay, no, it’s definitely not that. But admit it, it’s not the worst idea you’ve ever heard.

There’s no word yet on when the Stardew Valley 1.5 update, and Willy’s new door, will be released to the public, but the “nose to the grindstone” comment makes me think it’s still a good way off. I’ve emailed Barone to ask what’s cooking, and I’ll update if he tells me.