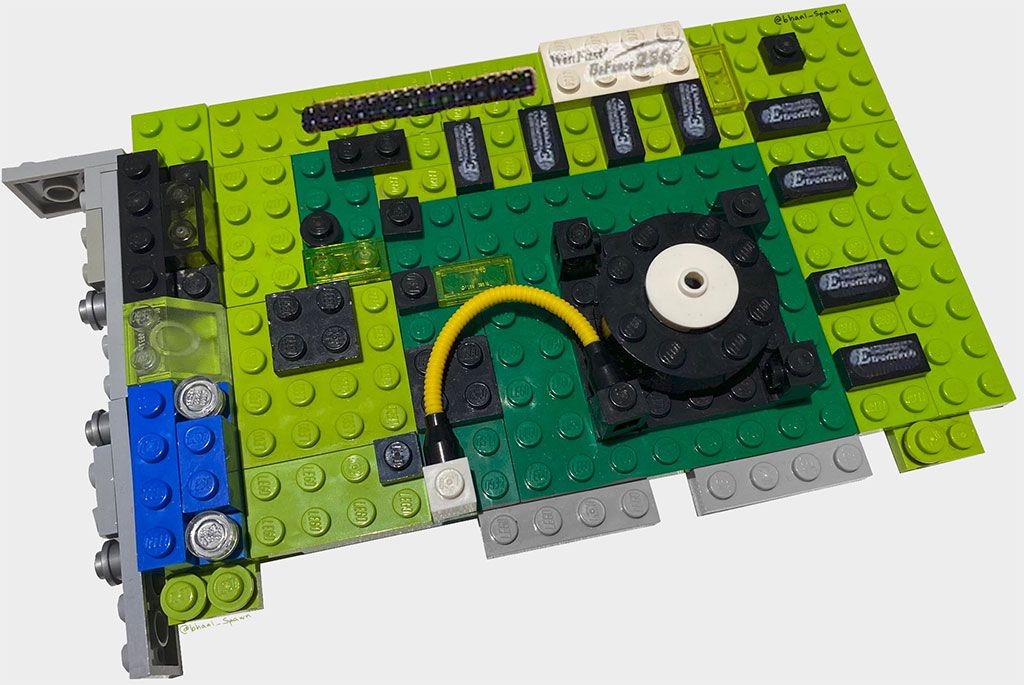 Nvidia is on the verge of rolling out a new generation of graphics cards based on its Ampere architecture, and if the rumors are on the money, the GeForce RTX 3080 and 3090 are going to be absolute beasts. Maybe one day they will warrant the LEGO treatment. In the meantime, this LEGO GeForce 256 graphics card is a throwback to one of the GPUs that started it all.

The term “GPU,” or general processing unit, actually did not exist before the GeForce 256 arrived in 1999. This gave way for Nvidia to lay claim to inventing the “world’s first GPU.” There were graphics accelerators that came before the GeForce 256, though Nvidia’s definition of a GPU is “a single-chip processor with integrated transform, lighting, triangle setup/clipping, and rendering engines that is capable of processing a minimum of 10 million polygons per second.”

Things have changed quite a bit since then, which makes an apples-to-apples comparison tricky. That said, the GeForce 256 was built on a 220nm manufacturing process and was capable of 50 gigaflops of floating point calculations, whereas today’s GeForce RTX 2080 Ti is built on a 12nm process and delivers 14.2 teraflops. It can also calculate a little over 20 billion triangles per second (by some measurements), along with having dedicated hardware for real-time ray tracing.

So the GeForce 256 is ancient and woefully under powered by comparison in the modern era, but is an important card in the history of 3D graphics all the same. And so Twitter user @Bhaal_Spawn recreated the card in LEGO blocks.

This is not @Bhaal_Spawn’s first PC gaming-inspired LEGO project. A few months ago, we highlighted @Bhaal_Spawn’s 3Dfx Voodoo creation, and some other projects include a LEGO Soundblaster Pro 2 and a vintage Adlib sound card from the 1980s.

I spoke with @Bhaal_Spawn about the inspiration behind these projects, which began about a year ago.

“I can’t remember why I started making them. It felt like a fun idea at the time! I like drawing and making things and PC gaming has always been an inspiration since I first played Sim City in 1990,” @Bhaal_Spawn explained.

There was not specific reason for the GeForce 256, other than it “just felt like the next iconic card” to make. As for what’s next, that is a question @Bhaal_Spawn is often asked.

“People keep asking me to make a motherboard to put them on. So we shall see!” @Bhaal_Spawn said.