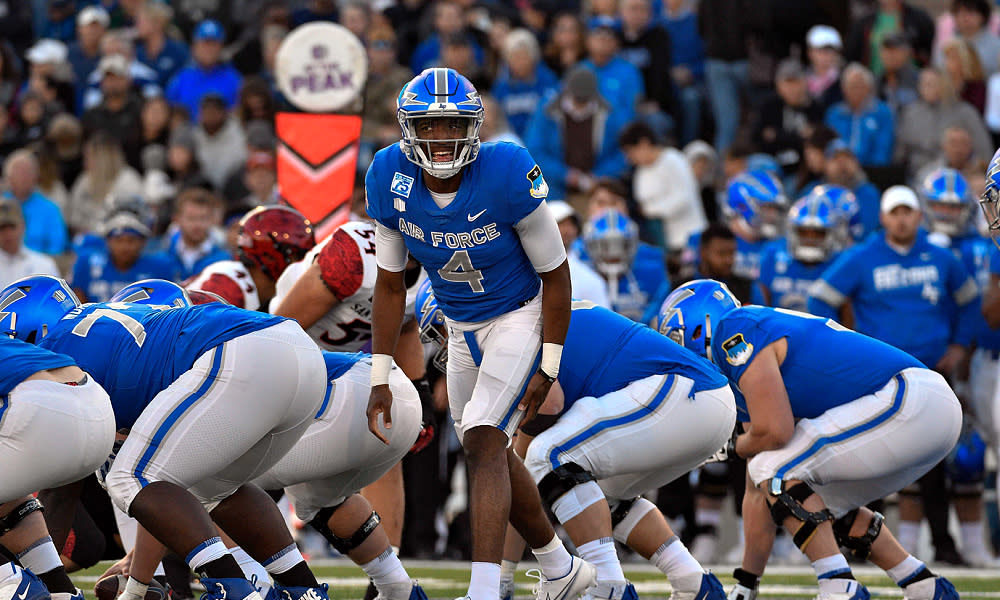 Air Force Falcons Preview 2022: Previewing, predicting, and looking ahead to the Air Force season with what you need to know and keys to the season.

The 2021 Falcons were this close to turning a great season into something truly special. The three losses all came by six points or fewer and all could’ve easily have gone the other way.

Everything worked. The rushing offense led the nation, the attack dominated the time of possession battle, and the defense ended up as the statistical best in the Mountain West.

Six starters return on offense and five are back on D, but that doesn’t quite tell the whole story with a slew of key contributors and the program’s ability to fill in the gaps quickly about to shine.

The Falcons were able to dominate on third downs, ran for 328 yards per game, and they averaged a nation-high 22.6 yards per completion. They controlled games, kept the defense off the field, and were great at taking the air out of the ball.

There’s not a whole lot of passing happening, but that’s okay. The job of QB Hazziq Daniels is to hit the open man when he’s got the chance, and he should be able to do that just enough to get by. He’s not all that accurate – he missed half of his passes – but he ran for 736 yards and 11 scores and kept the big mistakes to a minimum.

Leading receiver Brandon Lewis is gone, but he only caught 21 passes. The Falcons have other options to stretch the field and catch that one big pass a game.

It’s all about the ground attack. The Falcons were able to run for 300 yards or more eight times last year with 44 touchdowns and over five yards per carry. Daniels was second on the team in rushing, veteran fullback Brad Roberts is back after leading the way with 1,357 yards and 13 scores, and they’re not alone with a deep group of options behind them.

Three offensive linemen are back with good size and a solid starting five. The depth, though, is lacking and has to develop.

The defense was helped by the offense, and it will be again. This group was great at getting into the backfield and made a whole lot of plays, but the O that’s great at holding on to the ball gives everyone on the D rest. Five starters are back, but the personnel losses are huge.

Top tackler Tre Bugg is done in the secondary, top lineman Jordan Jackson is gone, and tough-guy tackler Damonte Means has to be replaced. Throw in the loss of safety Corvan Taylor, and the Falcons have to find new difference-makers.

The linebacking corps will be more than fine, but the secondary needs help around safety Trey Taylor – a good-hitting potential all-star talent. All-Mountain West pass rusher Vince Sanford will be a disruptive force, but the tackles and beef up front have to settle into a good rotation.

Don’t force Haaziq Daniels to throw
Daniels is a veteran who should be able to up his passing a little bit after only connecting on 49.5% of his throws, but he can hit the downfield play when he’s got a chance. If he has to throw, though, there’s a problem.

Air Force wins when it doesn’t have to throw. The O completed just one pass in three games, and didn’t even attempt one against UNLV. All were wins. The three losses all came in the three games with the most pass attempts.

It’s this simple for Air Force – throw because you want to, not because you have to. So …

Don’t let the other team’s passing game dictate the action
Teams are able to put the pressure on the Air Force offense a little bit by bombing away, and sometimes that’s okay. The Falcons were able to survive a monster game by Carson Strong and Nevada, but they lost a shootout against Utah State allowing 448 yards and a season-high five scores.

Army is/was Army – it doesn’t throw. However, it hit the big passes in the stunning win, and San Diego State’s occasionally-anemic offense was able to hit the short plays connecting on 85% of the passes. That was just enough to get by.

DT Christopher Herrera, Sr.
The Falcons are always able to find linemen who can step in and produce, but this isn’t a deep group. There’s not a ton of bulk on the team, so staying healthy is a must and holding up against the run is everything. The 6-5, 275-pound Herrera isn’t an anchor, but he’s the veteran who’ll be the one things work around.

C Thor Paglialong, Jr.
No, he’s not a transfer, but he’s being put here as the key guy who has to rise up and produce in a starting role – Air Force doesn’t have any key transfers. The veteran lineman started almost half of last year, and now it’s his job to quarterback the fantastic front with Ben Mercer done.

Boise State, Oct. 22
The Falcons were able to pull off the win last year on the road, but this time around Boise State should be stronger and a whole lot better. Going to Utah State will matter, and the regular season finale at San Diego State is a problem, but there’s no winning the Mountain Division without taking care of home against the Broncos.

Air Force Falcons Season Prediction, What Will Happen NEXT

Air Force isn’t like most teams. It’s able to build up the talent and parts to be ready to fill in when it’s their turn, so losing 11 starters isn’t that big a deal like it would be for anyone else.

Air Force had to all but start from scratch offensively last year and it was one of the most efficient and tight attacks in college football. Getting back six starters and a slew of other guys who saw meaningful time is like Christmas.

The team isn’t sitting on the results of last year. The O might have led the nation in rushing, but the demand is for more. More big plays, more dominance out of the line, and more control for a team that was among the best in the country and dominating the tempo. As long as that happens, everything else works defensively.

There wasn’t any time last year when the machine didn’t work or the team wasn’t able to adjust to the pace of the game, and this year there isn’t a game it can’t win.

It can beat Colorado. It can beat Boise State. It can put up double-digits wins and take the Mountain West title, but it’s asking too much to get the same all-around performance as the 2021.

Road games at Utah State and San Diego State are the big problems, Colorado won’t be easy, and Boise State, Wyoming, and Army will be fights. Anything less than nine wins will be annoying, but assume the Falcons can hit that regular season mark as long as the running game works like did last year.