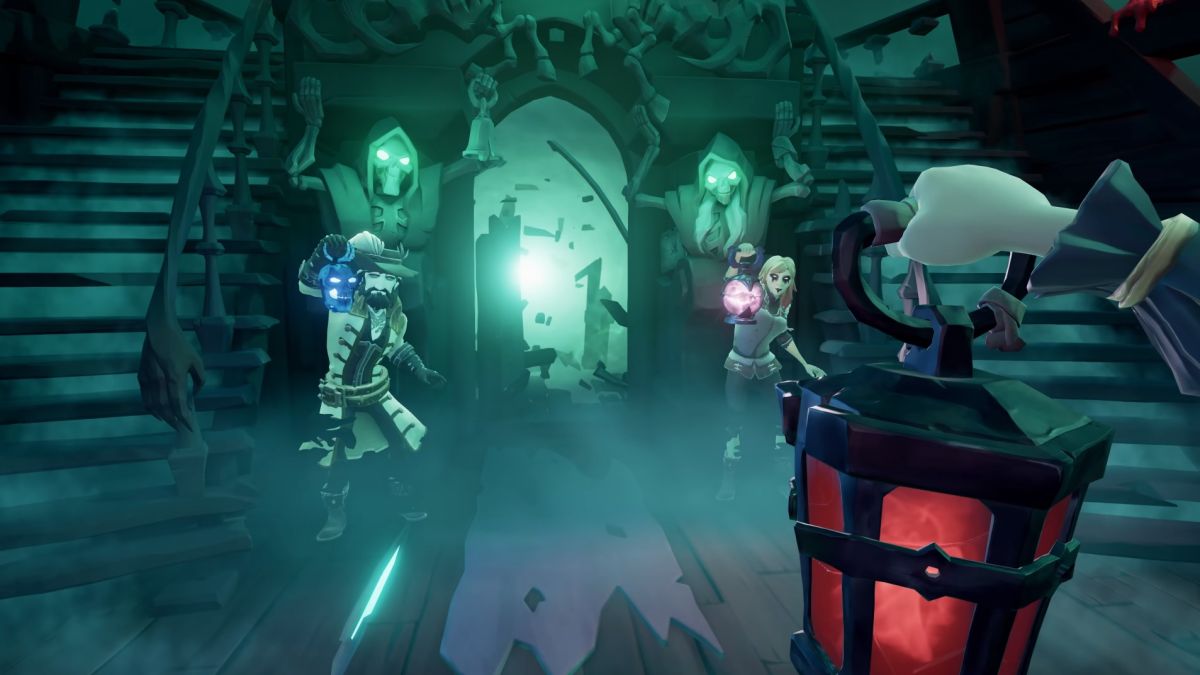 Death in Sea of Thieves is a temporary state: When you get stabbed, shot, eaten by a shark, or blown up by a teammate who decides to play a game of Swingsy Swordsie while other people are moving gunpowder barrels around, you take a quick trip to the Ferryman, ride on his ghostly ship for a bit, and then get sent back to your own boat, none the worse for wear. The upcoming Ships of Fortune update will enable a new approach to those unfortunate endings with the addition of an option that will give players the ability to revive their crewmates.

When the revive system is in place, fallen players will have 15 seconds to be revived by their not-dead teammates, or 25 seconds in the PvP arena. The revival process itself takes four seconds, during which time the reviving players will be defenseless—something to keep in mind before you try to be a hero in the middle of a big fight. Both crewmates and members of alliances can be brought back, and revived players rejoin the action with 25 percent of their health.

Even with the @RareLtd crew separated, our resourceful reporters are still working hard to bring you info about the changing motions of our oceans. Including improvements in The Arena and a deep dive on revive with @Hitbotc, the latest episode of Sea of Thieves News is here! pic.twitter.com/0FmPJQYLPKApril 15, 2020

One thing the update doesn’t make clear is whether the 15-second window is mandatory, or if players can opt to skip the wait and go straight to the death ferry. I would assume it’s the latter, since that’s pretty much the standard for revive systems—sometimes you just don’t feel like waiting, especially if you’re a solo player—but I’ve reached out to Rare to confirm.

Speaking of solo players, they won’t get any benefit from revives (unless they’re in an alliance), but a reduction in the countdown timer on the ferry means they’ll get back to the seas a little quicker than they did previously.

The change could have a big impact, particularly in large battles, but some players on Twitter are concerned that it could tip the scales too far in favor of alliances. I don’t think that’s actually very likely—if you’re a solo ship being pursued by an alliance, you’re probably in trouble anyway—but I also don’t play at an especially high level, so maybe I’m not seeing all the implications. We’ll find out soon enough.

Other changes mentioned in the update include an option to show Tall Tale starting locations and eligibility on the map, a new quitting penalty for the PvP arena, and a new “crew status” option that will enable players to see where their fellows are, and what they’re doing, at long distances. (Personally, I think it’s fun to have to figure it out manually, but some people just want to get straight to business.)

Sea of Thieves: Ships of Fortune is set to go live on April 22. In case you hadn’t heard, there will be cats.