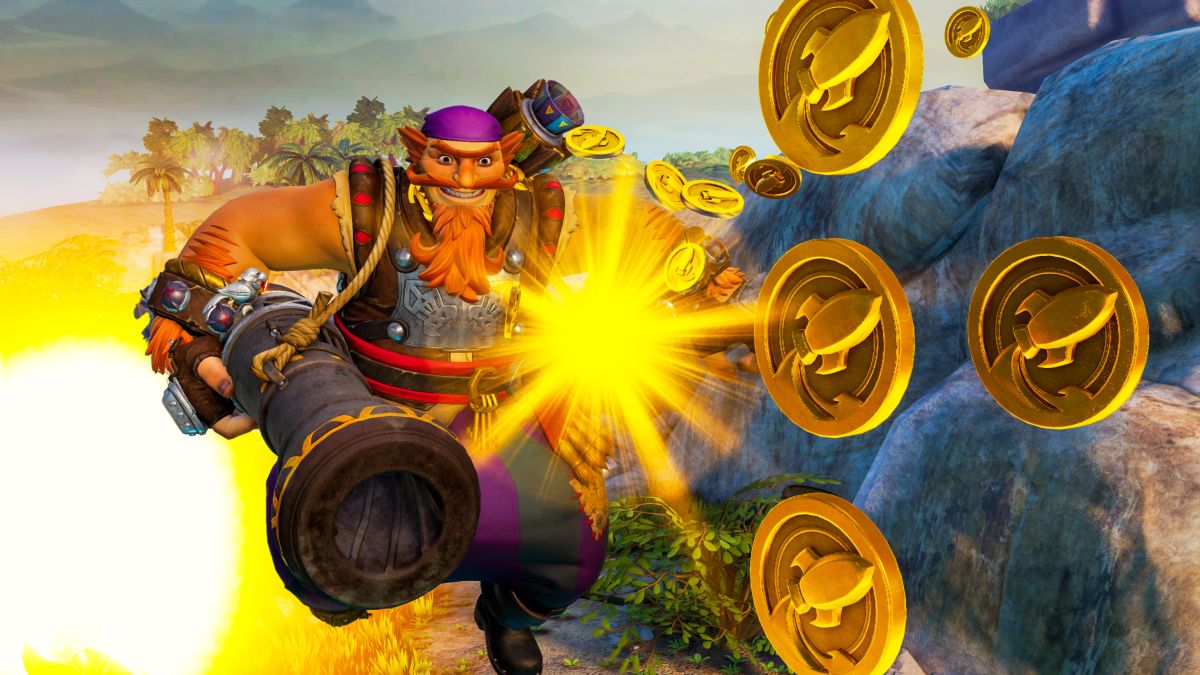 If the name Rocket Arena sounds familiar, that’s because the 3v3 hero shooter was already announced once before. It happened about a year ago, and it even underwent a closed beta—though at the time it was an FPS from developer First Strike Games and being published by Nexon.

Today Rocket Arena was re-announced, this time as a third-person shooter (still 3v3), and now it’s being published by EA and launching on July 14. I got to play a few hours of the new Rocket Arena last week: check out some gameplay footage above.

Rocket Arena is a chaotic, colorful, and kid friendly (or at least concerned parent-friendly) shooter since there’s no bloodshed and no one gets killed. That’s because in Rocket Arena, no one has a health meter, only a blast meter. As you get hit by rockets, your meter fills until you get ejected out of the arena.

Each hero in Rocket Arena has different types of rockets and abilities. For example, the pirate Blastbeard is slow-moving but has a powerful cannon that fires in an arc, and his special ability unleashes a huge shockwave that deflects rockets and knocks back opponents. Amphora, sort of an ocean-based character, can turn into a manta ray-shaped pool of water, slide quickly around the map, and then erupt into a waterspout, launching enemies into the air. Izell can lunge toward opponents for a fast strike or ensnare them with her bola to yank them toward her.

And every character can double-jump, triple-jump, rocket-jump, and even rocket-climb up walls, meaning there’s a lot of mobility no matter which character you play. In my session there were six characters to try, but there will be a total of 10 at launch with more coming later.

I got to play a handful of different modes, like the uncomplicated Knockout, where a team scores a point with each opponent they blast out of the arena. There’s also Rocketball, where you try to control a big Rocket League-lookin’ soccer ball and score goals. Of all the modes, I had the best time in Rocketball because character abilities can come in handy both with speed on offense and power on defense. Stopping someone from scoring by launching them into the air with a waterspout and then hammering them out of the arena with rockets is pretty cool.

Another mode called Treasure Hunt wasn’t quite as much fun—it alternates between chasing the player carrying a treasure chest and then collecting as many coins as you can from the map while Mario-esque music plays. It pretty heavily favors the faster characters, like Rev, who zips around on a hoverboard and is hard to catch if you’re playing as someone slow like Blastbeard.

But in every mode, matches only last a few minutes, and the maps are all fairly small, so the action never really stops and you’re always in the thick of it. If you’re blasted out of the arena you quickly float back in so there’s very little downtime even if you’re getting knocked out a lot.

I’m not sure if Rocket Arena will appeal to players looking for a highly competitive shooter or even real teamwork—in my sessions it was kind of a messy free-for-all. But it’s a fun enough party-style game and I can see the Rocketball mode being a hit. Rocket Arena is going to be a live service game with updates, new characters, maps, modes, cosmetics, and season passes coming after launch.

Rocket Arena will be on both Steam and Origin for PC, with cross-platform play supported on day one. It’s priced at $30, and there will be a $40 version with extra cosmetics and enough rocket fuel (that’s Rocket Arena’s in-game currency) to redeem the first season pass, which is set to arrive on July 28. Have a look at the six announced characters below.