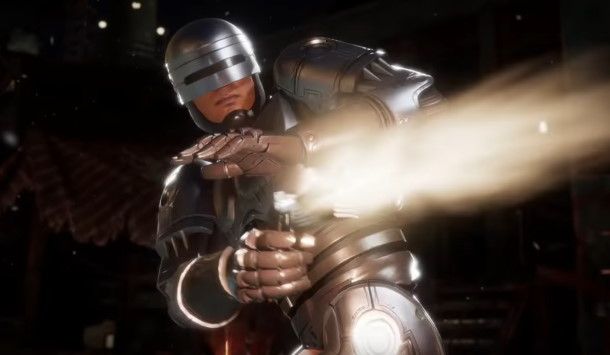 Remember that scene in Robocop where the future of law enforcement deals with a pair of would-be rapists by shooting one of them in the junk? It was a memorable moment, disturbing on a few levels, and soon you’ll be able to recreate it in Mortal Kombat 11.

A new trailer released today features fresh fist-fighting fun and fatalities from Robocop, Sheeva, and Fujin, a trio of new characters joining the fight in the Aftermath expansion announced last week. It’s fairly conventional stuff as Mortal Kombat goes—which is to say wildly excessive by any reasonable standard, even in the context of fighting games—but I do enjoy MK’s fatalities and it looks like this bunch will bring a few fun ones to the fight.

The junk shot will probably get the most attention, but Sheeva’s ability to separate skin from bone is undeniably impressive, and when Robocop whips out that state-of-the-art Cobra Assault Cannon, well, I like it! My favorite finisher, though, is a touching tribute to days long gone—and yes, maybe “touching” is a little overboard, but there’s something about watching Shang Tsung get pancaked with an MK arcade standup that really takes me back, you know?

(Ironically, according to the Mortal Kombat Wiki, Mortal Kombat: Deadly Alliance was the first game in the series to be developed exclusively for home consoles—a planned arcade release never actually happened.)

Mortal Kombat 11: Aftermath comes out on May 26 and will sell for $40. It will continue the story of Liu Kang’s ascent to godhood that began in the base game (because that matters, I guess) and will also bring back Friendships.