Triangle Strategy is a game title that when uttered without any context doesn’t give any indication of what it might be. It sounds like a placeholder working title, which isn’t far removed from when it was introduced as Project Triangle Strategy. But when game development is led by Tomoya Asano, producer of Octopath Traveler and Bravely Default, it could have just about any nonsensical name and RPG fans would put it on their radar. The game design seems to be more akin to Final Fantasy Tactics than the producer’s more-famous titles, but that might be even more reason why this title has piqued the interest of so many.

Triangle Strategy is a tale that takes place in the continent of Norzelia. The Saltiron War has ended over thirty years ago, which as the name implies was a war over the resources of salt and iron. A new conflict has arisen between the three countries of Glenbrook, Hyzante and Aesfrost. The player takes on the role of Serenoa Wolffort as he steps into a new leadership role as a union is made between him and Princess Frederica Aesfrost, moreso as a political move than out of love and romance. This union has goals to ease the political tension and strengthen their respective kingdoms of Glenbrook and Aesfrost, but the conflict continues to grow as Serenoa and his companions navigate their way through the war.

As is the case with most JRPGs, Triangle Strategy can be divided into combat and noncombat sections. Despite being one continent comprised of three countries the lore of this world is deep. Outside of battle Serenoa can explore freely in town while talking to NPCs to learn more about each character and their place in the world. Cutscenes and dialogue are a huge part of the game, and it isn’t a meritless argument to state that Triangle Strategy may be too long-winded in its frequent cutscenes. But that is the price to pay for a game that wants to weave a memorable and detailed story to create a world that demands to be explored and cared about. What’s considered right isn’t a simple matter of black or white but really various shades of grey as citizens of the different countries’ perspective aren’t simply about justice or malevolence, but about their perspective of where they fit into the world. This is a tricky narrative device and game mechanic to pull off, but it’s an area where this title excels. 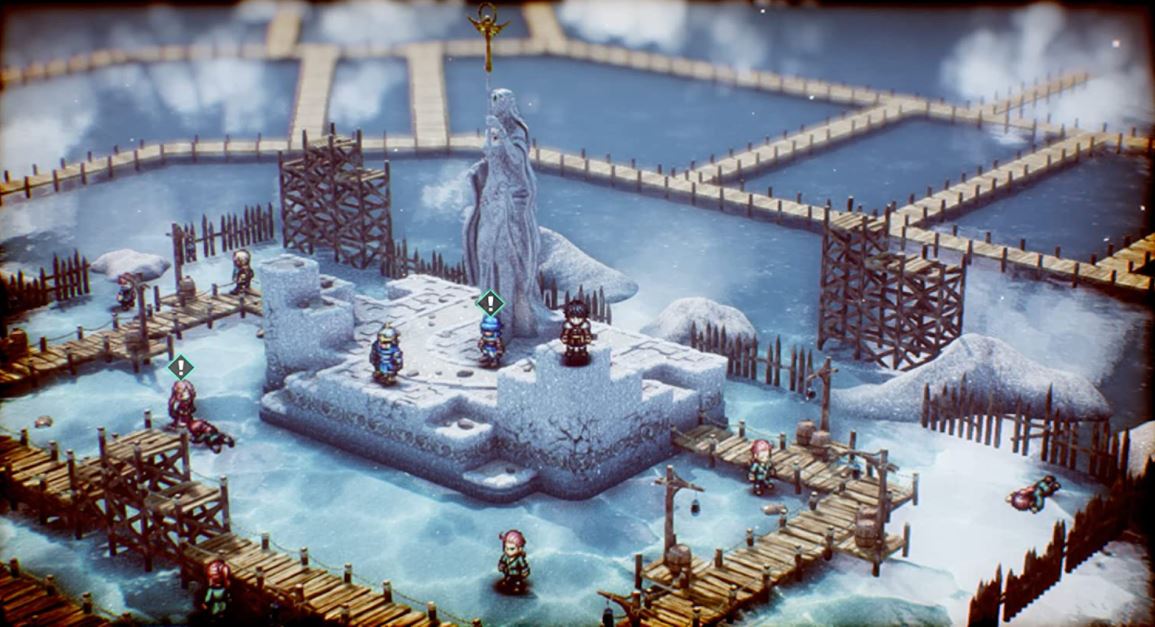 Keep track of the branching of narrative and how Serenoa fits into everything is done through the Scales of Conviction. This is an invisible meter that keeps track of how Serenoa responds to different dialogue prompts with each choice strengthening his conviction of either Loyalty, Utility or Liberty. Serenoa can’t boss his compatriots around, but has to influence them by speaking to them in ways that are mindful of their perspective. Because the effects of Serenoa’s Conviction can’t be seen by any measurable graphic, it’s up to the player to gauge what the best course of dialogue is to achieve a desired effect based on the context clues from other character dialogue. This makes the interactions feel more organic, even if it’s still conversation through multiple choice. Different dialogue options all play into how Serenoa’s story unfolds which can lead to the story continuing in drastically-different directions. This adds a lot to the replay value as multiple playthroughs are the only way to experience every different possible scenario.

Combat is the biggest strength of Triangle Strategy. From the onset of the first battle it’s impossible not to see the influence of Final Fantasy Tactics or Fire Emblem. War is waged on a tactical grid where terrain and placement can help tip the scales in or against the player’s favor. Puddles of water can be electrified to make environmental hazards for the enemies while taking the high ground will increase the damage dealt. Having units flank enemies is a huge advantage, as adjacent flanking units will get an extra attack. There’s a variety of characters that Serenoa recruits which can make battles interesting and entertaining. This is good because it isn’t uncommon for some of these conflicts to last well over a half hour. Unfortunately grinding is a necessary step in building up a respectable army but thankfully this is a process that isn’t too painful with training battles. 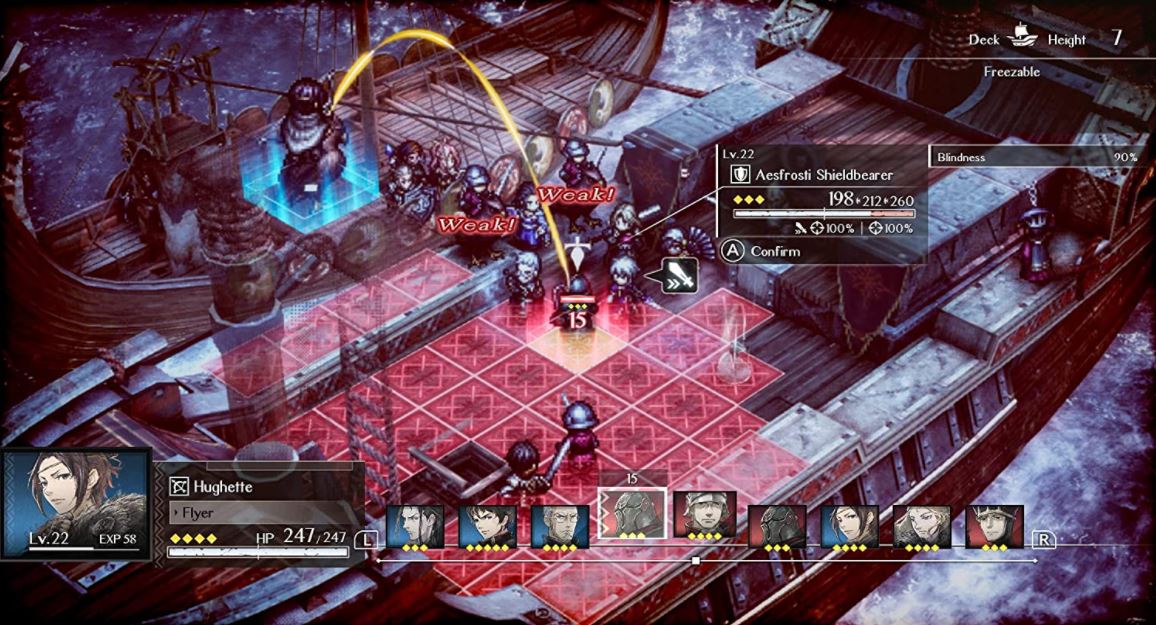 JRPGs are known for being heavy in dialogue and story development, and Triangle Strategy is no exception to this. If anything it takes things into the more extreme end where dialogue and cutscenes can go on for over an hour between battles. This is the game’s greatest asset and liability depending on subjective taste in such matters, but it regardless leads to pacing problems, especially early on. For those with the patience for such an emphasis on exposition, this approach does make Triangle Strategy a special game. Establishing a complex world with an intricate political conflict between three kingdoms does require a lot of build up. The result is a story where the player is invested in Serenoa’s choices, most of which do not have an obvious right choice and all have weighty consequences on the world. Does he make his choice based on what he think is best for his betrothed or does he remain loyal to his childhood best friend? Or does he feel the right thing to do doesn’t align with the wishes of those closest to him? These decisions are designed not to be easy as the game successfully captures what leadership is like in a war-torn world where there are no clean cut “good” answers.

Triangle Strategy’s graphics immediately draw comparison to Octopath Traveler that merge the golden age 16-bit JRPG aesthetic for characters with more contemporary 3D models for the environments. It’s not the first game to use this retro/modern aesthetic, but this helps it feel almost like a modern incarnation of that games that influenced it. The accompanying soundtrack perfectly fits the mood and tone of the game, and is also just high-quality music in its own right. There isn’t a ton of character customization of equipment management involved and while those might be features that people enjoy, they do help streamline battle preparations. 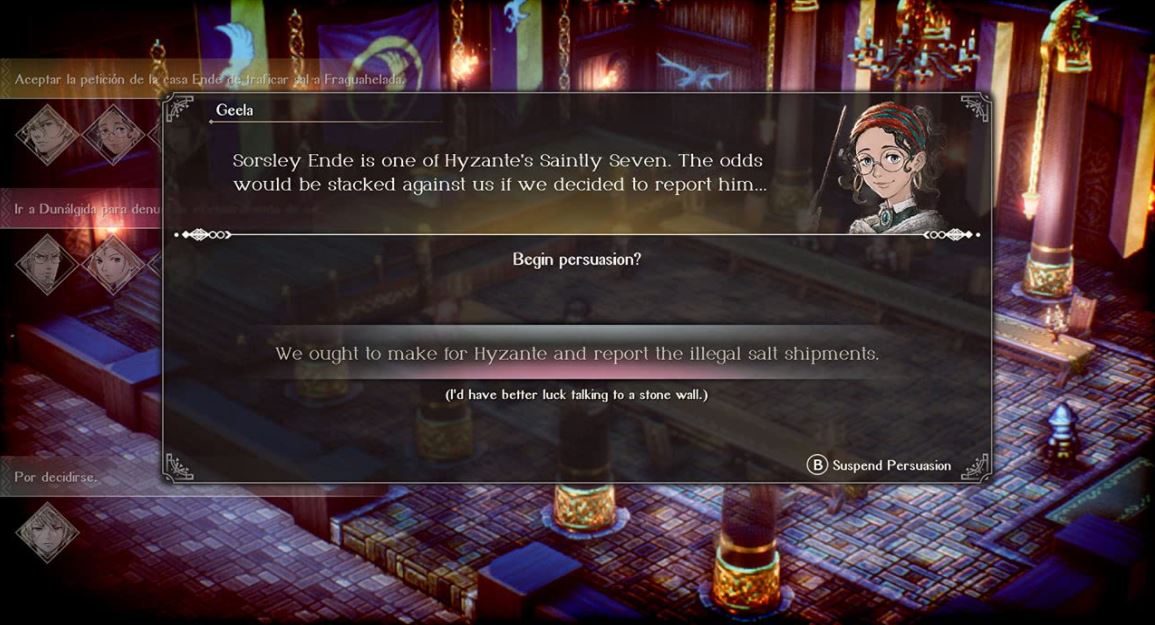 Triangle Strategy is a unique tactical JRPG, excelling in delivering enjoyable tactical combat and developing an intricate world where the complexities weigh heavily on the choices players have to make. It isn’t without its issues as the execution of such rich world building and interpersonal relationships requires a lot of exposition which leads to pacing issues. Even if the player is interested in the developing narrative, some of the early cutscenes drag on for too long and simply end up being boring. The tradeoff is that those who can get through the slower-paced games are rewarded with a challenging battle system and choices that have a significant impact on the story. A New Game Plus feature allows players to carry over their progress to see how different decisions play out and unlock the multiple endings and the game is enjoyable enough where repeated playthroughs sound like an inviting prospect.