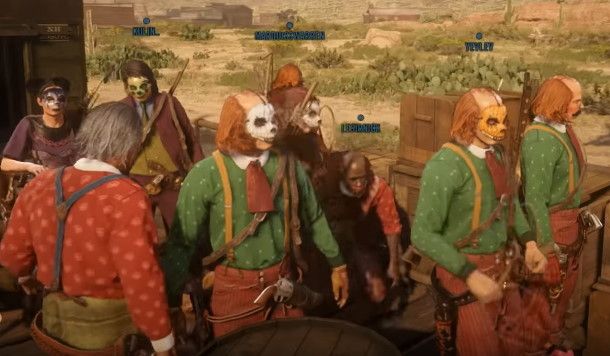 It’s been seven months since the release of Moonshiners, the last update to Rockstar’s Wild West multiplayer adventure Red Dead Online, and the players are starting to get a little antsy. And so, as noted by PCGamesN, they’ve taken to the game’s virtual spaces to express their displeasure in a slightly unusual way.

RDO’s literal clown show is apparently rooted in Red Dead Fashion, a subreddit dedicated to showcasing character customizations—something of a cross between an ongoing digital fashion show and a photography contest. In June, it held its first-ever themed event, based on the city of Saint Denis, which was apparently quite a success, and so for July it decided to follow up with something a little more pointed.

“Since we’re all clowns for believing we’ll get an update, it’s fitting that we dress up as them in-game too!” the Travelling Circus fashion contest post says.

The theme for July is actually Travelling Circus, and players are encouraged to take inspiration from ” strongmen/strongwomen, acrobats, mimes, jugglers, ring masters, knife throwers, and more.” But clowns are clearly the star of the show: Over the weekend, player OnlyPVPCat was able to put together a digital flash mob of RDO clowns, which led to predictable shenanigans including a group photo op, horseback rides, street races, and a hammer fight on a train.

The frustration with the lack of updates is real, but Magnar, an admin on a Red Dead Online Discord, told Polygon that its members are trying to handle it in a positive fashion. “Rather than let it turn negative or nasty, which in game communities things often can, I thought I’d turn [our protests] into something a bit more fun or even wholesome in a way,” they said.

Submissions for the Red Dead Fashion Travelling Circus will close on July 16, so you’ve only got a couple of days to dress up and take a great photo if you want a shot at fame and fortune. On the other hand, if you just want to dress up as a clown and fire off a tweet at Rockstar, I expect that will be going on for a good while yet.