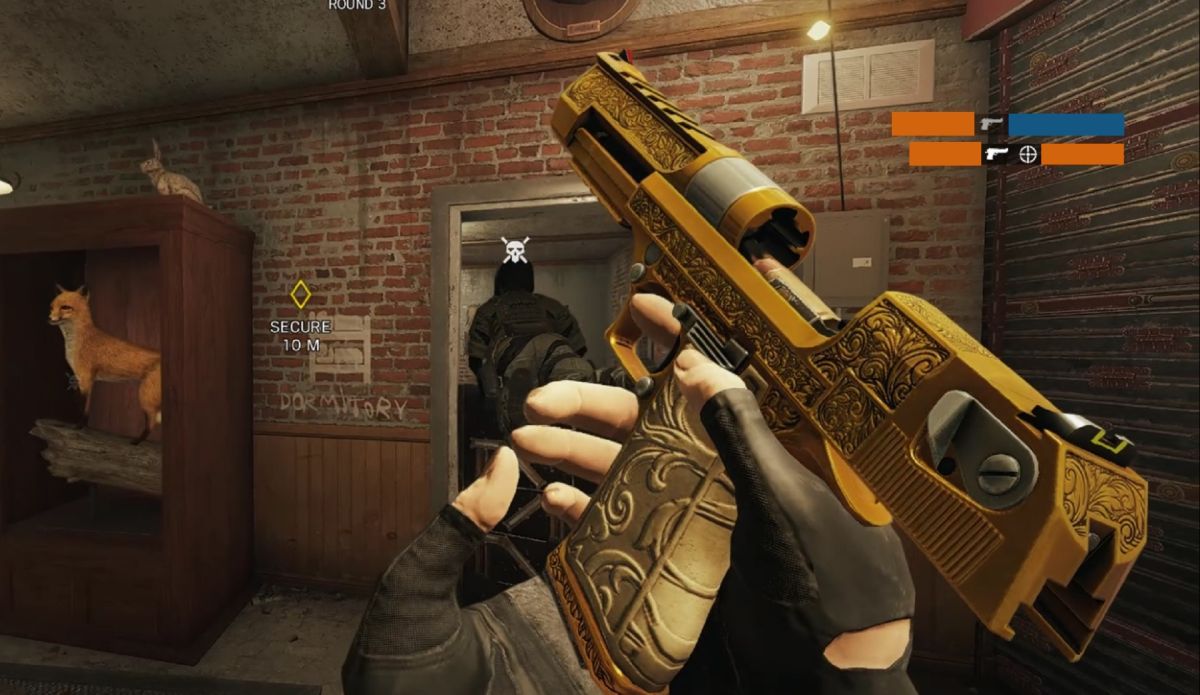 Start practicing your one-taps, because Ubisoft just surprise-dropped Rainbow Six Siege’s first Arcade mode. Golden Gun, a tribute to the custom GoldenEye 007 mode of the same name, is live today through March 23. The rules are simple: Everyone has a golden Deagle that kills in one hit and must be reloaded after every shot.

I probably don’t have to tell you this, but dropping enemies with a single pistol blow feels pretty sweet. Ubisoft has tweaked the physics so that every shot carries the force of a cannonball. When the bullets really start flying, bodies soar across the room like they’re directed by John Woo.

Gadgets are still in play, but Ubisoft has hand-picked which operators make sense for the mode. So far, 3-speed operators like Ash or Alibi feel like the way to go. The extra speed is a great bonus when half of your time is spent dodging enemy shots while you reload. Thanks to a fanciful new reload animation custom to the mode, it takes double the normal time to chamber your next bullet.

The supercharged Deagles have some other fun properties, too. Windows, doors, and hatches shatter in a single shot. One bullet can also punch a melon-sized murder hole in a wall. It’s an all-in-one Swiss Army Gun, basically.

Golden Gun is the perfect kind of dumb fun, but I can already see some ways it could be improved the next time Ubi rolls it back into Siege. I’ve noticed that when many people miss their first shot, they’ll rush and go for a knife kill. Knifing is fun in its own way, but it kind of betrays the spirit of Golden Gun. Right now, the mode is also limited to the new Oregon map rework. The map has no special modifications for Golden Gun, so I see no reason for the limitation.

Golden Gun is still an excellent debut mode for Siege’s new Arcade playlist. The idea is to occasionally run smaller, light-hearted modes on weekends to play with friends. I love the idea of a quicker side activity for when I’m waiting for friends to finish matches or I just need something relaxed after an overtime Ranked game. The plan is to add a new mode each season, building a reliable hopper of modes that Ubi can cycle through.

I also prefer that the modes are time-limited. Overwatch has an always-on suite of arcade modes that I never touch, but the scheduled immediacy of Golden Gun is more attractive for a mode that I wouldn’t want to play for weeks on end. It’s like the McRib of tactical shooters. Golden Gun is up through Monday, so give it a shot while you can.