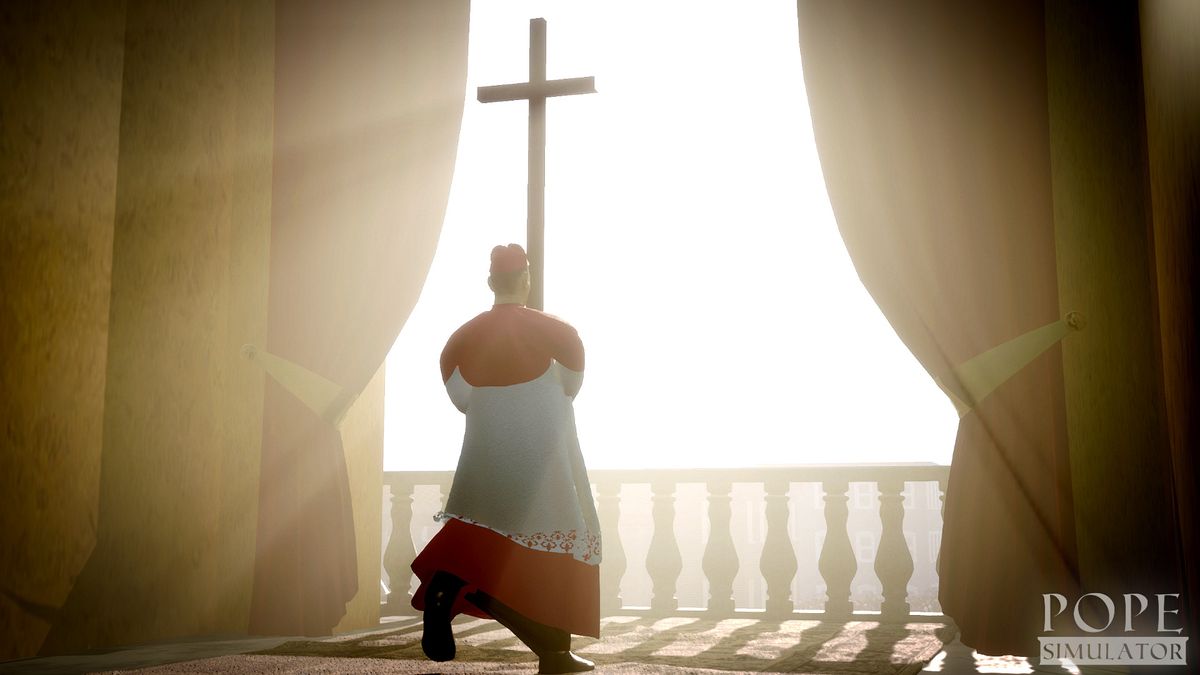 Did you ever say to yourself when you were young, “When I grow up I want to be the Pope?” No? Well here’s your big chance anyway, sort of: Pope Simulator, a new addition to the menagerie of weird, ultra-niche sims on PC that promises to immerse players in a “realistic” depiction of life as the Pontiff.

The game begins on Conclave day, when the College of Cardinals elects a new Pope—that’s you. You’ll begin your reign by choosing a coat of arms, which will apparently impact the course of your papacy, and from there you’ll set out to influence the course of the world through the application of “soft power”: Organizing pilgrimages, advocating for world peace, moderating conflicts, and otherwise strategically wielding the influence of the Vatican.

“The Pope has no military or economic power behind him, but he has other means of influencing the world, which was evident in the 1980s, for example, when the communist system in Poland collapsed,” Ultimate Games CEO Mateusz Zawadzki said. “Our idea assumes the possibility to use, among others, the so-called soft power, and consequently influence the fate of the world and interfere in international politics. All this, of course, in accordance with the vision adopted by the player.”

It turns out that the Pope works a lot like an old-school magic user. He has specific skills that can be developed over the course of the game, and is powered through a sort of mana pool—faith—that’s recovered through prayer. You’ll be able to share the strength of your faith with crowds or use it to bless in-game units, but you’ll need to be careful with how you throw it around: “Every decision to interfere in the fate of the world comes at a price,” the Steam listing says. “With further actions you strengthen the faith of others, but you weaken yourself.”

If all of this strikes you as oddly familiar, it may be because of another niche PC game, I Am Jesus Christ, a first-person game announced in late 2019 in which you are—as the title states—Jesus Christ, wandering the world preaching, performing miracles, kicking Satan’s ass, and eventually getting crucified for your trouble. (It’s okay, though: It’s really just the ecclesiastical version of taking away all your guns halfway through an FPS.) And that similarity isn’t a coincidence. According to the Ultimate Games website, I Am Jesus Christ publisher PlayWay SA has been a “significant investor” in the company since 2016.

Despite that, and the first-glance silliness of the whole thing, I think Pope Simulator could actually be a really interesting game if it’s done right. An accessible strategy game about the application of influence, without the threat of direct military or economic power to back it up, could be a really engaging experience, especially if it incorporates some of the darker aspects of the Catholic Church’s history, or the challenges it faces going forward on matters like birth control, same-sex marriage, and declining church attendance. I won’t hold my breath expecting it to happen, but if it does, this could be a legitimately good game.

And even if it’s not, at least now we’ve got Popemobile Simulator to look forward to, right? You know it’s going to happen.

Work on Pope Simulator is still “at a very early stage,” so no release date has been set.