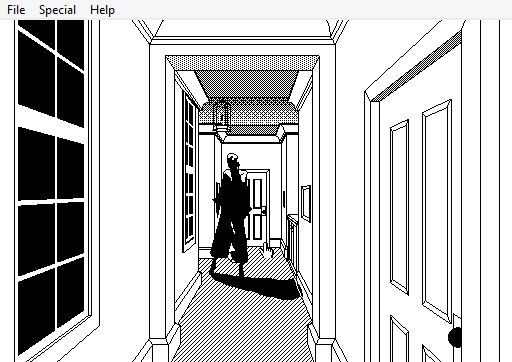 If you’re not familiar with HyperCard, it was an approachable development tool for the Macintosh that allowed creators to use then-revolutionary hyperlinks to make databases, multimedia presentations, and even…games. Myst was made using HyperCard, by letting players warp from one stationary image to another (and by using video files to further flesh out its world).

There’s been a heartening resurgence of HyperCard recently, from Eliot Gardepe’s Hypercard Framework to the stacks of old HyperCard creations that are being preserved on the Internet Archive. People are also making new HyperCard games, including Hyper P.T., the latest, and perhaps wildest, remake of P.T. yet.

It’s a pretty authentic recreation of Konami’s P.T. Or, at least, I’m saying that after playing for only a few minutes—those more familiar with the complex to-do list of the original download will be more equipped to see how it develops, once you’ve solved a few of its obtuse, ritualistic puzzles. But the iconic hallway is there, and captured with impressive detail given its low-res, monochrome nature.

There’s something about old technology that gels sublimely with the horror genre, so a recreation of P.T. in a 33-year-old development tool is an idea that makes a lot of sense. Hyper P.T. has ties to, well to P.T., but also to old Macintosh games such as Uninvited. In playing it, you’re playing an unholy fusion of the past and the recent present. It’s pretty wild, and freely available, if you’re interested, from itch.io. (Many thanks, Warp Door.)