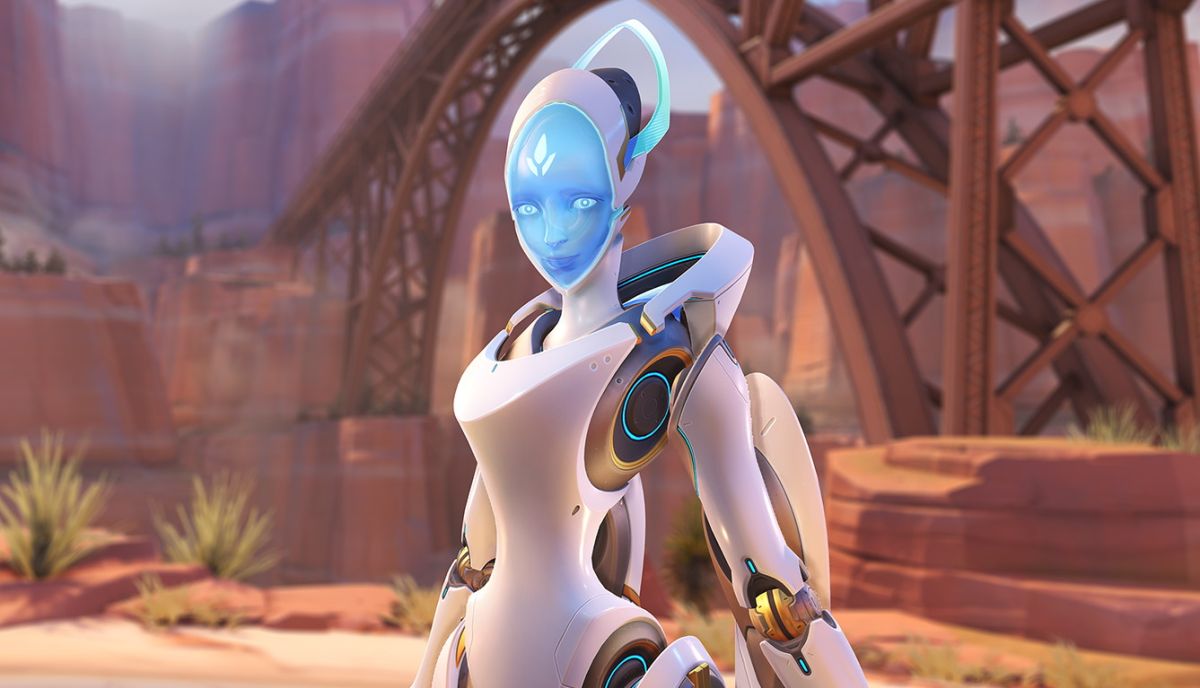 Yesterday, Blizzard unveiled the next character coming to Overwatch: An advanced Omnic named Echo who was created by Dr. Mina Liao, the long-unrevealed sixth founding member of the online supergroup. Today, Echo became playable on the Overwatch PTR, and Blizzard revealed more about her history (Blizzard refers to Echo as “her”) and what she brings to the fight.

“Echo is a really special character for us in that our players have known about her for a very long time,” game director Jeff Kaplan said. Echo was seen and named in the big Overwatch 2 cinematic released last year, but Kaplan pointed out that she actually appeared long before that: “Players had actually seen Echo in earlier versions of the artwork for Overwatch. She was featured in the Reunion cinematic, where McCree frees her from the Deadlock Gang.”

Kaplan also revealed more about Liao, long known as a founding member of Overwatch but known only by time until now. She came to team from Omnica Corporation, the company responsible for creating the Omnics, and after the end of the Omnic Crisis she continued her work to create an “adaptive learning robot” that could adapt to fill specialized roles on demand.

That resulted in the creation of Echo, but when Liao was killed in an attack on her laboratory, the Overwatch team shut down the project and put Echo into cold storage. She was unintentionally freed when a train transporting her to a new facility was hijacked by the Deadlock Gang, leading to her dramatic rescue by McCree, and her decision to join the Overwatch team.

“Mina Liao lives on through Echo,” Kaplan said. “Echo absorbed much of who Liao was, and is also constantly adapting to all of the agents around her.”

That adaptability is reflected in Echo’s in-game capabilities. Her primary attack, Tri-Shot, fires three shots at once in a triangular pattern, and she can also alt-fire sticky bombs with a delayed detonation. She can fly freely, which sounds handy, can glide while falling, and also has a “focusing beam” that inflicts “very high damage to targets with less than half health.” It gets the same damage boost against barriers that are less than half health.

Echo’s ultimate ability is especially interesting: “Duplicate” enables her to duplicate a targeted enemy character and gain use of their abilities. It’s not a disguise—Kaplan emphasized in the character introduction video that Echo’s duplicates will be visually distinct from the “real” characters—but it does grant her some pretty wild-sounding powers.

“If the enemy team has a Reinhardt and I’m Echo, I can use my ultimate ability on Reinhardt, and then for a pretty significant period of time I get to play as Reinhardt also on the battlefield,” Kaplan saays in the developer update video. “And in addition to that, my ult generation as Reinhardt during that timeframe is extremely accelerated, to the point where with some characters—Tracer for example, we’ve seen it with Roadhog—Echo in the form of those characters can actually get off multiple ultimate abilities.

“I know it all sounds crazy, if it’s too crazy we will balance it back further than it is, but it is an extremely fun thing.”

Echo is now playable on the Overwatch PTR, but will not be coming to the new experimental card, as Kaplan said “the technology doesn’t allow us to do that.” He also warned that the PTR could be “prolonged” because of the balancing and tuning required with the release of a new character.