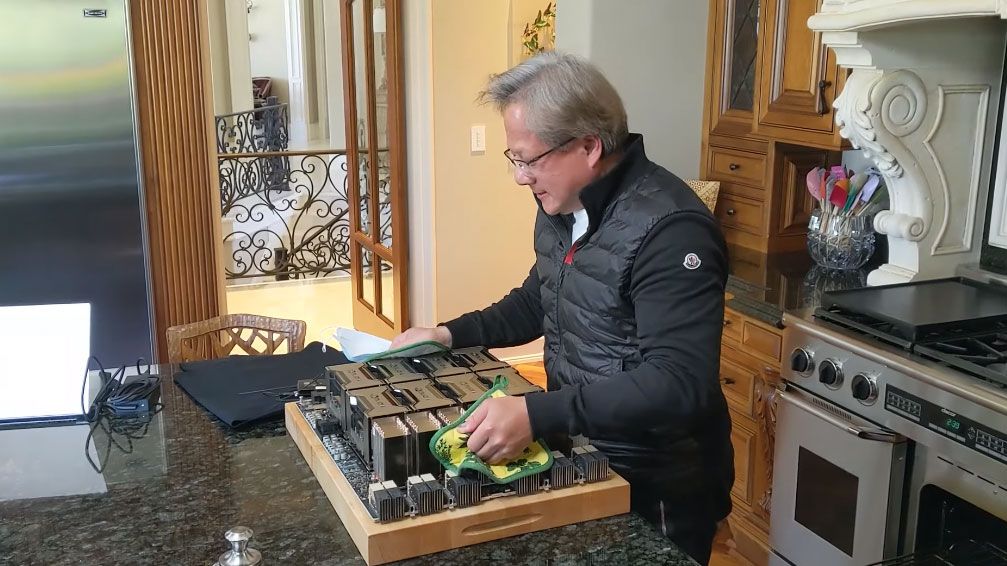 Cooking videos have never been more popular as they are right now, with celebrities battling the quarantine blues by showing off their culinary skills. Or lack thereof in some cases. It’s not just thespians and athletes getting in on the action, either—there’s a video showing Nvidia CEO Jensen Huang pulling “the world’s largest graphics card, fresh out of the oven,” and placing it on a wooden cutting board.

Our first collective reaction to the video was, holy hell, the GeForce RTX 3080 Ti is absolutely massive! There’s no two ways about it, you’re going to need a bigger case. And a beefier power supply. Oh, and it’s definitely going to sag, reinforced PCIe slots or not. But hey, can you imagine the rays this beast can trace?

We kid, of course. Jensen might very well be showing off an iteration of Nvidia Ampere, its next-gen GPU, but not in consumer form. We started to analyze the setup for clues, then got distracted by the kitchen and, well, the conversation took a bit of a detour.

Rather than turn this train of thought around, we figured it would be a good opportunity lift the curtain and give you a peek at the kinds of hard hitting analysis that goes on in our hardware division. It went like this:

Alan: I have watched Jensen take that out of the oven now far too many times.

Dave: Surprised by his tiny oven, that’s defo not his house.

Jacob: His house is huge though, it’s a giant polygon.

Alan: Where is his leather jacket? Does not wear it ALL THE TIME???

Dave: It’s probably in the backup kitchen for the bathroom.

Alan: He definitely has SLI kitchens.

While this was going on, I was hitting the web for some equally insightful research. I think you’ll be impressed. Notice the time on the oven says 2:39. Coincidence? I think not! When performing a search on Google for “239 Ampere,” the first result is a Zillow listing at that address. Even Bing came up with the same result.

The house is 3,245 square feet. Could those be CUDA cores? For reference, the GeForce RTX 2080 Ti sports 2,944 CUDA cores. That’s precisely the same number as another Zillow listing for a house on Turning Leaf Ct. Or should I say, Turing Ct? Clever attempt to cover your tracks, Nvidia, but not clever enough.

Zillow estimates the mortgage on the Ampere home to be $1,500 per month. Obviously this is meant to reflect that the GeForce RTX 3080 Ti will come in a little bit higher than the 2080 Ti, which debuted at $1,199 (for the Founders Edition). Bummer, though actually reasonable on a price per square inch basis.

I know what you’re thinking, how does Zillow have anything to do with this? The answer’s obvious—it already has a working relationship with Nvidia, so naturally it’s a goldmine for GPU rumors.

Questions? Send them to Dave.

Anyways, make sure to tune in for Huang’s GTC keynote on May 14, 2020 at 06:00 Pacific time (14:00 BST) where the leather-clad CEO is expected to announce the Nvidia Ampere GPU architecture.