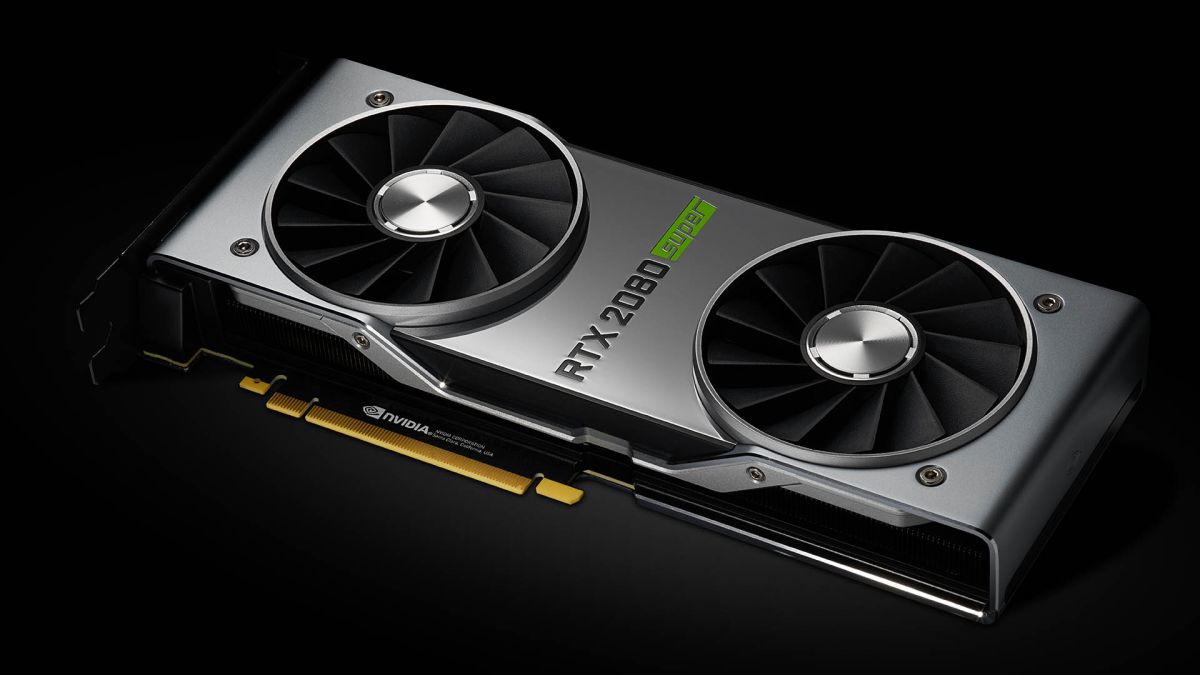 According to the latest Nvidia Ampere rumours, your RTX 2080 Super ain’t going to age well, but at least the prohibitive performance cost of ray tracing might be a thing of the past.

Yes, off the back of the green team announcing its May 14 GTC keynote there’s been a groundswell of next-gen GPU rumours. First, the official—Jen-Hsun is going to take to the virtual stage, surely still in his trademark leather jacket, and is encouraging us to ‘Get Amped’ for Nvidia’s online keynote.

Subtle, no? The Ampere codename more or less confirmed, it looks like we’ve also got the first commercial Nvidia Ampere machine being prepped for the wild too. The DGX A100 trademark (dug up by tweet-machine, Komachi) was filed at the end of March, and details a machine built using the next-gen Ampere based pro-card, likely the Tesla A100.

At the heart of the card will be the GA100 GPU, which is expected to be the first Ampere-based graphics silicon to be released and the basis for a new generation of compute-centric professional workstations and GPU server blades.

The Nvidia DGX machines have been around since the days of the Pascal architecture, but saw multiple Volta-based versions packing in up to 16 V100 GPUs for a whole lot of GPU-backed compute power. And all that Volta GPU power can be yours for just £390,857.66, or £18,760.63 per month. Eeep.

The GTC event this month is going to be primarily about high-performance professional computing, so don’t expect there to be any GeForce announcements. Those stories about RTX 20-series cards being cleared from the channel in anticipation of an imminent release of next-gen Nvidia graphics cards are making too much of a leap if they expect them anytime soon.

So, the DGX A100 is the first official mention of an Ampere-based rig, but that’s as far as the reliable information goes…

A new supposed leak, published on the Moore’s Law is Dead YouTube channel—and definitely from insider sources at Nvidia, guv’nor—claims to have a whole lot of detail about the new Ampere-based GeForce cards. The detail is honestly pretty light, kinda woolly, and amounts to little more than a few marketing bullet points.

The key takeaway, however, seems to be that Nvidia Ampere is going to be both a gaming and professional architecture, marking a change from the Volta/Turing days or AMD’s own bifurcation of its gaming and pro GPU tech. And that performance-wise it’s going to be more than just a die-shrink of the RTX 20-series’ Turing.

With ray tracing capabilities supposedly four times that of Turing, Ampere’s GeForce cards are expected to largely mitigate the prohibitive performance hit that turning ray tracing on demonstrates with the current generation of GPUs. And that is going to reportedly show how poorly Turing will age compared with the new cards, essentially making it look like a test platform for ray tracing, with Ampere being the proverbial ‘real deal’.

The speculation is that something along the lines of a potential RTX 3060 could trace rays at the same sort of level as a $1,200 RTX 2080 Ti. Which is possibly a bit of a stretch… and doesn’t mean it will deliver general gaming performance along those lines either. The rasterised performance of Ampere is something that’s still yet to be even rumoured about, and that’s going to play a big part in making up the overall gaming performance of the next generation of Nvidia graphics cards.

The other intriguing tidbit is the claim that GTX is dead, and that there will be RTX prefixes up and down the GeForce stack, with Tensor and RT Cores being dropped into even the lowest spec Ampere GPUs.

The rumour mill is still grinding away, and this latest video is just adding in a little more grist, but we’ll hear more about the Ampere architecture in a few weeks, with those gaming cards set to follow later in the year.