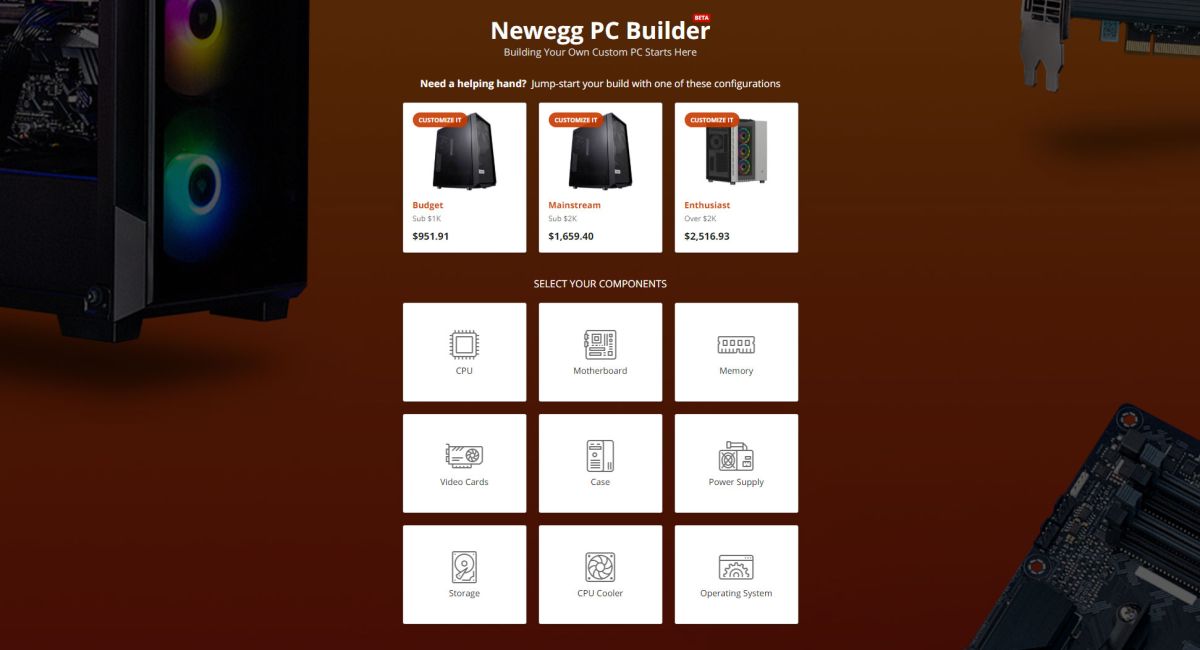 Newegg is aiming to take some of the guesswork out of building a PC by guiding potential DIY buyers through the component selection process, thereby ensuring the selected parts are all compatible.

Launched in beta, the “Newegg PC Builder” is an online PC configuration tool. Potential builders can start from scratch and select hardware from each category—CPU, motherboard, memory, and so forth—or they can choose from one of three preconfigured PCs. If going the latter route, buyers/builders still have the option of customizing the component selection on a part-by-part basis.

“Newegg got its start nearly two decades ago selling components to tech enthusiasts, many of whom built their own computers long before home PC building caught on as a mainstream trend,” said Anthony Chow, Newegg’s Global CEO. “The Newegg PC Builder is a direct connection to our DIY roots, and we’re excited about empowering the next generation of home PC builders.”

Indeed, the pre-configured options are not prebuilt PCs, but collections of compatible hardware at three different tiers and price points: Budget (sub-$1K), Mainstream (sub-$2K), and Enthusiast (over $2K).

This is not a complete substitute for doing your own research, though for first-time and/or otherwise inexperienced builders, I can see where this would be helpful.

“Building a PC can be a complicated process with near-limitless configuration possibilities. With so many components, brands, specs and compatibility issues, determining the right configuration that suits the customer’s usage needs and budget limitations can be a daunting task,” Newegg explains.

It’s fairly basic, in that the configuration tool in its current form does not go any deeper than providing a list of compatible components. For example, when I selected a Core i9 9900K processor and headed to the motherboard category, the first option was an Asus Maximus XI Hero for $289.99, followed by an ASRock B356M Pro4 for $79.99.

That’s a big gap in pricing, with no explanation as to why I might want to select one over the other to pair with that particular CPU. However, it does avoid displaying motherboard options that will not work my choice of CPU, so that’s good.

The other drawback is being limited to a single vendor. PCPartPicker is a bit more fleshed out, with the added advantage of pointing buyers to the best prices among multiple retailers. I also found PCPartPicker’s system builder interface to be a bit sleeker and easier to use, though it comes up short in the explanation department as well.

Still, I applaud Newegg for offering this—while it doesn’t replace the need for due diligence, it does give builders some direction, which can make going this route less intimidating for those new to the DIY scene.