Mothergunship studio’s next game is a ‘playable sitcom,’ free on the Epic Games Store 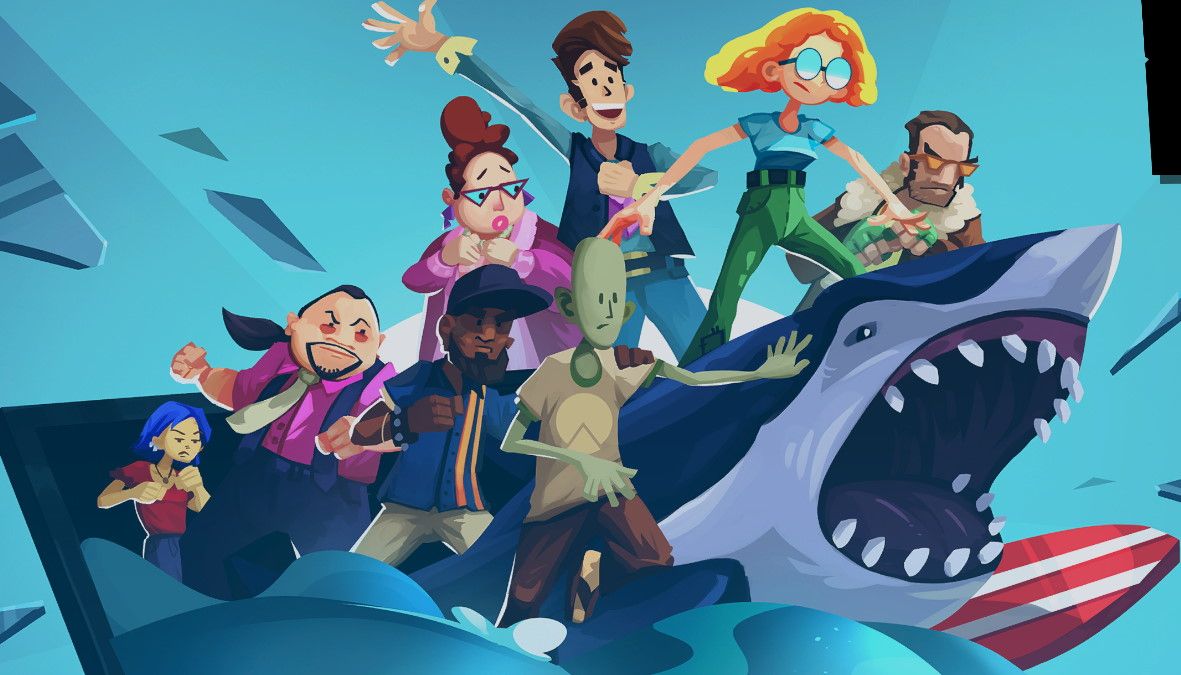 Terrible Posture Games, the studio behind Tower of Guns and Mothergunship, is trying something new and very different for its next project. Guns are out, and an “episodic playable sitcom about life at the world’s worst game development studio,” called 3 Out of 10, is in.

The first episode of 3 Out of 10 centers around Midge, a new animator at Shovelworks, whose predecessor mysteriously exploded on the job. Her first task as an animator is to help deal with a crowd of gamers angry about the studio’s upcoming endless runner, Surfing With Sharks, which thanks to a dispute between the writer and the artist has mixed up tiger sharks with great whites, enraging everyone.

That absurdity is something it shares with Terrible Posture’s previous games. “One of the things that really resonated with both games is that people seemed to enjoy the comedic elements, they seemed to respond well to them,” creative director Joe Mirabello told me during a recent preview. “I’d never considered writing a thing that I was super-excited about doing for games, but when people began responding really positively to it, it kind of got the wheels turning.”

At first glance, 3 Out of 10 looks like a point-and-click adventure, but that’s not really the case. Instead, it’s a series of sitcom-style animated scenes punctuated by a range of different mini-games, including Surfing With Sharks, the really crappy endless runner that Shovelware is working on in the game’s fiction.

“When Zuko [Terrible Posture Environment and Technical Artist Chris Zukowski] and I sat down after Mothergunship and were like, what are we going to work on next, we had a lot of different genres we wanted to work on, and 3 Out of 10 is kind of all of them,” Mirabello explained.

“The nice thing about 3 Out of 10 is that we’re not stuck in one genre or one game, building one kind of thing for years and years before you can see what people think. This is something where, if people really like the driving game—you’ll see that in Episode 2—then we can do more about that. If people really respond to the homages to older games, you’ll see more of those too, we can do more of those.”

The game’s first season is divided into five episodes, connected by a “meta-story” that will unfold over time. But each episode is designed to be self-contained, so players can jump in and out as they like.

“That actually kind of gets to the heart of the whole project. We know that these days gamers really spend a lot of time in only one or two games—they’re a player of this game,” Mirabello explained. “But they still have time to watch their favorite show, or to read their favorite comic, or to engage in something that’s smaller. So as long as something is easy to get into, short, funny, accessible, we think that players will like it.”

3 Out of 10 also prioritizes accessibility: Gameplay segments can be replayed for better scores or skipped over entirely if you just want to follow along with the story, and scenes can be rewound or replayed as well. You can collect stars as you work through the game if you enjoy that sense of accomplishment, but they don’t actually mean anything, and the leaderboards are fake.

An ongoing animated series is a big job for a relatively small studio, but it’s possible thanks to a number of animated processes that Terrible Posture has put into place. Each episode is scripted into a spreadsheet that Unreal Engine (3 Out of 10 is made with Unreal Engine 4) stitches together into a basic structure that the developers can then build on.

Despite the timing, Mirabello said that 3 Out of 10 is not influenced by the Apple TV series Mythic Quest: Raven’s Banquet—”I’ve purposely not watched it because I don’t want to be influenced by it”—and while some of the situations in the game may be inspired by his real-life experiences in game development (before founding Terrible Posture, Mirabello spent time at Iron Lore and 38 Studios), it’s not likely going to weigh in on the more serious problems currently facing the industry, such as the recent allegations of widespread abuse at Ubisoft.

“We have to be very careful with those kinds of things in a comedy game, because people sign up for the game expecting a certain tone,” he said. “I do feel like there’s room for satire. But I’ve got to make sure that I feel like I can actually properly satirize it … The last thing we ever want to do is accidentally punch down.”

Epic is supporting the development of 3 Out of 10 by making all episodes available for free, but otherwise it’s apparently just standing back and watching. “They’ve been a very good partner with us. This would not be possible without them,” Mirabello said, “They’ve let us build this experiment. They’re as interested in this experiment succeeding as we are, but they realize it’s an experiment, and in order to do it right they need to let this thing play out.”

The first episode of 3 Out of 10 is available today on the Epic Games Store. Find out more at 310.show.