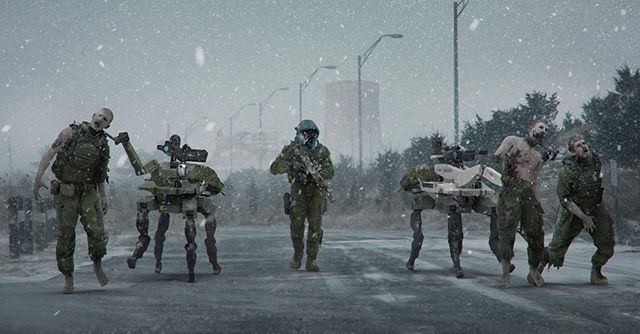 For Call of Duty: Modern Warfare, Infinity Ward decided to ditch the zombie mode that’s cropped up in many of its predecessors. The team was making something a bit more grounded than Black Ops or Infinite War, and apparently shambling corpses just aren’t authentic or realistic enough. It looks like the no-zombies rule wasn’t settled on straight away, however, and some undead concept art has appeared.

Instead of channelling B-movies, the art posted by Modern Warfare principal concept artist Aaron Beck is more evocative of Swedish artist Simon Stålenhag, whose incredibly popular retro-futuristic dystopias have spawned books, games and and a very slow Amazon TV show that I’ll probably never get around to finishing.

The snow, the nuclear power plant and the robots would all look very at home in Tales from the Loop, but the zombies add another level of menace. Don’t worry—they’re on leashes.

“I was thinking it would be fun to play with the classic Call of Duty zombie gameplay,” writes Beck, “hinting here at some sort of Russian special forces soldier and his duo of quadruped robots, holding captive zombified soldiers by leashes around their necks.”

The zombie modes typically diverge a great deal from the solo campaigns, so I don’t think anyone would have put off by one being attached to Modern Warfare. It’s a shame, then, that Beck’s concept didn’t get explored further.