Minecraft with RTX is “coming soon”, here’s how to create textures ripe for ray tracing 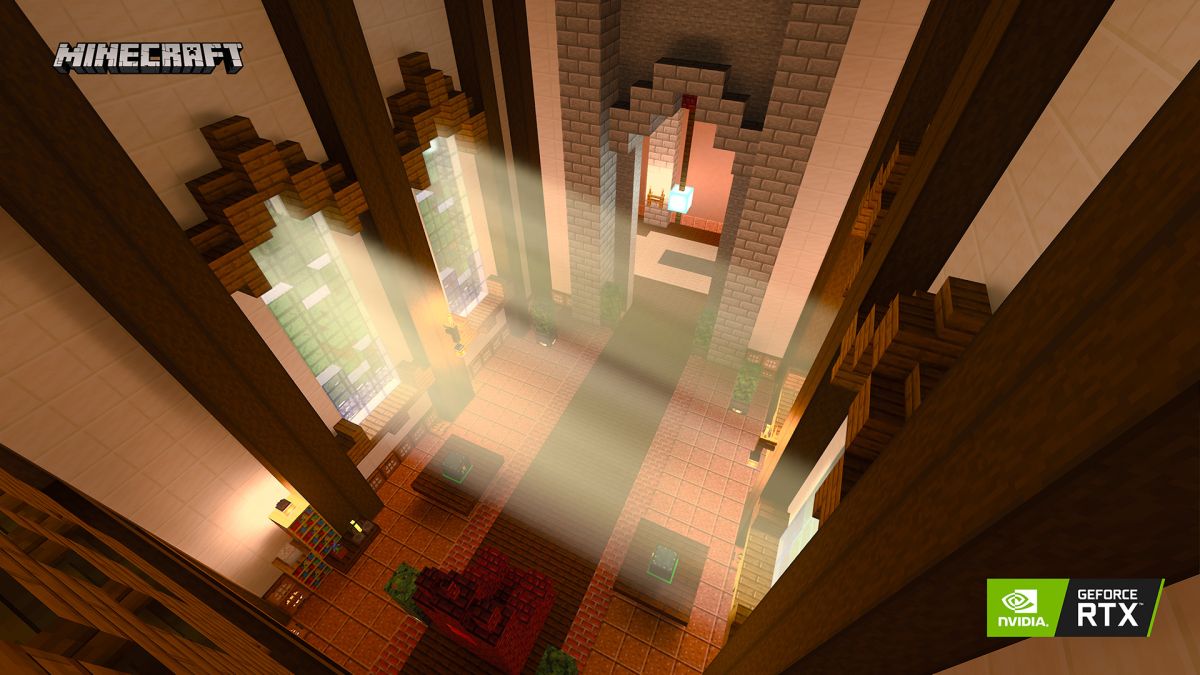 Nvidia has released a new sneak peek of the upcoming Minecraft DXR update, ‘Minecraft with RTX’, and it’s once more promising the ray tracing overhaul is “coming soon”. But before all that, you can take a look at three new worlds designed by some of Minecraft’s top creators—Razzleberries, BlockWorks, and GeminiTay—along with two presentations on the in-game path tracer and how to go about building textures for real-time ray tracing yourself.

Each of the custom game worlds focuses on a different feature of Minecraft with RTX—the upcoming DirectX Raytracing update for Minecraft. Of Temples and Totems RTX by Razzleberries uses heaps of lava to highlight per-pixel emissivity, global illumination, and real-time shadows; while Imagination Island RTX by BlockWorks focuses on stunning god rays. Crystal Palace RTX by GeminiTay brings it all together in a grand, surprisingly well-lit, castle.

So all appears to be in place for a Minecraft with RTX release date relatively soon, but we’ve still no official word on when that might be from Microsoft. Nvidia simply states the game is “coming soon”.

For now we’ll have to settle for the two videos and two how-to guides—originally intended as part of Nvidia’s GTC conference that has since moved online-only—outlining how to go about setting up your own custom worlds for a real-time ray tracing makeover.

If you want to start creating your own textures for when that release date arrives, you’d best take a look at the video titled “Creating Physically Based Materials for Minecraft With RTX“.

In it, Kelsey Blanton, associate producer at Nvidia; Paula Jukarainen, devtech engineer at Nvidia; and Joel Garvin, art lead at Microsoft, dive into the tools and pipeline knowledge required for high-definition ray-traced textures. The video’s runtime is over an hour, however, so prepare yourself for extensive note-taking. You can also check out the how-to guide.

There’s also a handy guide to transferring your Java Edition worlds into Minecraft: Windows 10 Edition, as required for the Minecraft with RTX update.

The second video is a deep-dive by Nvidia’s devtech engineer Jakub Boksansky on the process of creating a real-time path tracer for Minecraft. While you won’t necessarily need to understand the ins and outs of the path tracer behind the scenes to enjoy all those shiny surfaces, it delves deeper into the tech controlling the significant overhaul to Minecraft’s blocky aesthetic.

Microsoft is targeting 60fps performance from the Nvidia RTX 2060 GPU upwards with its ray tracing update. Sure, that’s still an RTX 20-series graphics card, but, if the target is met (and it is just that, a target) then Minecraft with RTX will at least offer an enjoyable experience all the way down the ray-tracing capable stack—important for a game otherwise so accessible and well-optimised across all manner of gaming PC.

Perhaps later this year we’ll have some competition in the market, in the form of AMD’s upcoming Navi 2X GPUs. With Minecraft RTX delivered by the DXR API extension to DX12, Mojang is promising it’ll be supported across future DXR-capable platforms—so don’t let the name fool you into thinking this is limited to GeForce graphics cards. And there’s that AMD-powered Xbox Series X to think about…

As someone that has tried out the RTX update—even in a rather primitive state—way back in 2019, it’s been near-impossible to return to regular ol’ Minecraft since. Yet with no official launch day confirmed we’ll have to settle for the usual cuboid backdrop and a vague promise of availability sometime soon. Here’s hoping we’ll be enjoying global illumination, reflections, shadows, and everything else Minecraft’s advanced path tracer can deliver by the summer.