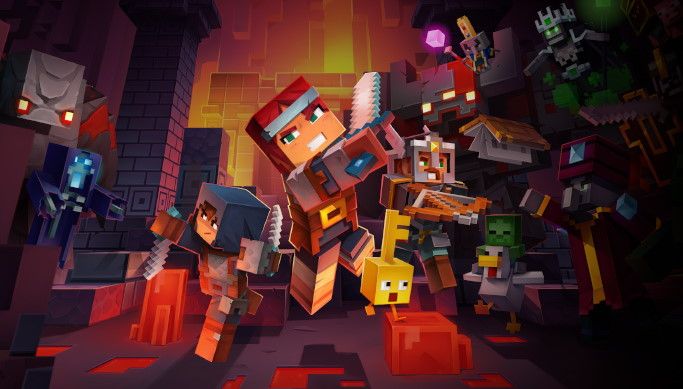 Minecraft Dungeons is a action-RPG dungeon crawler in the style of Minecraft—thus the title. We said in our recent look at the game that it feels closer to games like Castle Crashers, or even Overcooked, but the most obvious comparison is to the king of the genre: Diablo. It came out today, and it turns out that the Diablo connection is more than skin deep: Minecraft Dungeons has a secret cow level.

Lords of Gaming has a good breakdown of how to get to it, but the short version is that after you’ve finished Minecraft Dungeons once, you’ll need to find your way into a giant church near your camp. Once inside, you’ll interact with a painting of a dog, which will reveal locations in other levels of the game that you’ll need to revisit in order to discover hidden runes. Get them all, come back, push the big shiny button, and the gateway to the secret level, called Moo?, will be opened.

If you’re not familiar with the story of Diablo’s secret cow levels, it began with a rumor about the first game, which was in fact false—there is no secret cow level in Diablo. But it was persistent and silly enough that Blizzard put one into Diablo 2: It’s an open field filled with Hell Bovines—literally bipedal cows packing polearms—surrounding the Cow King, who you really should not kill. If you haven’t yet had the pleasure, you can see it in all its ridiculous glory here.

Diablo 3 also has a secret cow level, filled with Infernal Bovines and ruled by the Cow Queen, although for some reason it’s called Not the Cow Level.

Minecraft Dungeons’ cow level sounds like a lot of work to access, although I suppose that’s true of the original too, but it’s a fun (and perfectly appropriate) tribute to the games that inspired it. If you’re just getting started with Minecraft Dungeons, be sure to catch our rundown of tips and tricks to help you crawl and brawl your way through it.