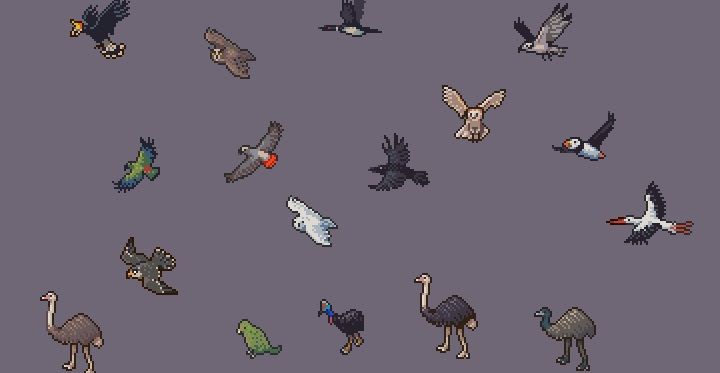 It’s still wild to look at a screenshot of Dwarf Fortress and see graphics and lovely detailed art—it’s very surreal, especially after becoming so used to staring at the old ASCII world. Bay 12 and publisher Kitfox Games are still getting it ready for the eventual Steam launch, but in the meantime why not take a look at some critters and treasure?

They are excellent birds. In the original game, most of the world and its critters are just described to you, so it’s quite the leap to see it all recreated in lovely pixel art. It’s probably pretty easy to find good art references for birds, but a bit tougher for Dwarf Fortress’s monsters. We got to see some of them earlier in the year, and creator Tarn Adams explained that it was tricky to make the pixel art recreations accurately reflect the original text. They’re a handsome bunch of monstrosities, nonetheless.

Along with the birds, Adams has shown off some seeds, which you’ll be able to plant and nurture into real and fantastical flora, as well as some treasure and coins. There are specific currency materials you can make coins and treasure out of, but you can also craft them out of less precious resources. Unfortunately, just as he was taking the screenshots, a lizard started eating all the seeds.

This sounds very Dwarf Fortress, where you’re at the mercy of the chaotic simulation even when you’re just trying to get a screenshot for a development update. Normally, you’ll be able to protect your seeds from lizards and birds by storing them properly or filling your fortress with cats.

Dwarf Fortress on Steam doesn’t have a release date yet, though you can still let the classic version devour all of your time. It looks like Bay 12 is still experimenting with new features, and Adams says he’s been working on lots clickable buttons, widgets and more mouse support lately. Back in April, we had a chat with him about how some of these interface changes could make Dwarf Fortress easier to play.