If you have followed any of my reviews and articles about Legend Bowl, then you should already know that I’m a big fan of the game. One of the reasons I’m a big supporter is because King Javo, the main developer behind the game, is always actively trying to add to it. Some of those additions have been the ability to mod the game, a season mode, and now a Legend Bowl franchise mode option that allows you to take control of a team over multiple years and build a franchise through the draft, free agency, facility upgrades, and more.

So how does franchise mode work in Legend Bowl? Well, let’s talk about it. 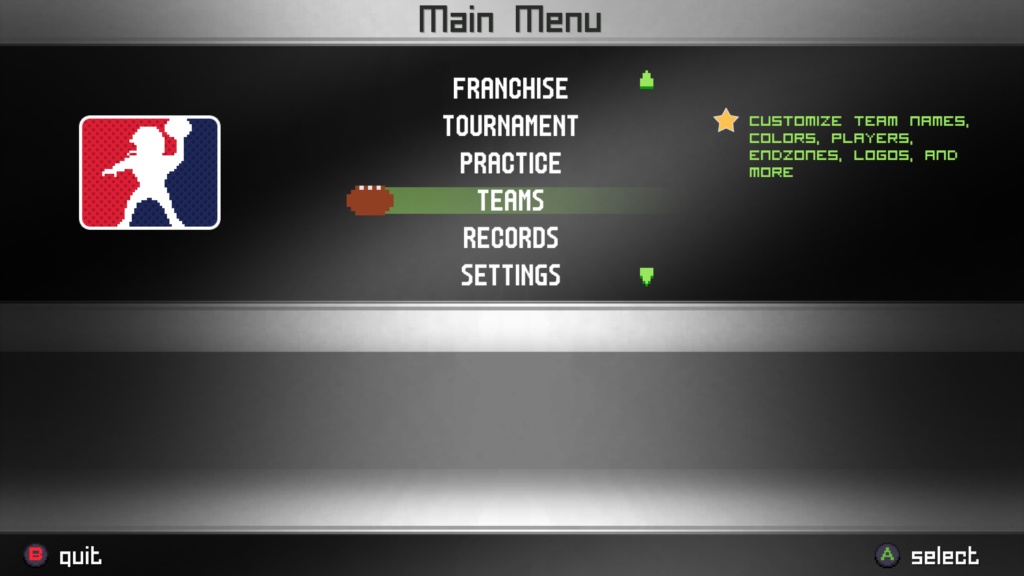 As I mentioned, a franchise option is something fans have been craving for months, and thankfully it is here. When you go to this mode, the same excellent gameplay is still there, the same league mods are still available to play, but now the game gives you the option to pick a team and build it out in the way we see fit. That starts with completing the first season, and this can start with this year’s league play, or you can jump back to any year you choose, which is fantastic if you’re using a retro-style roster from the past. 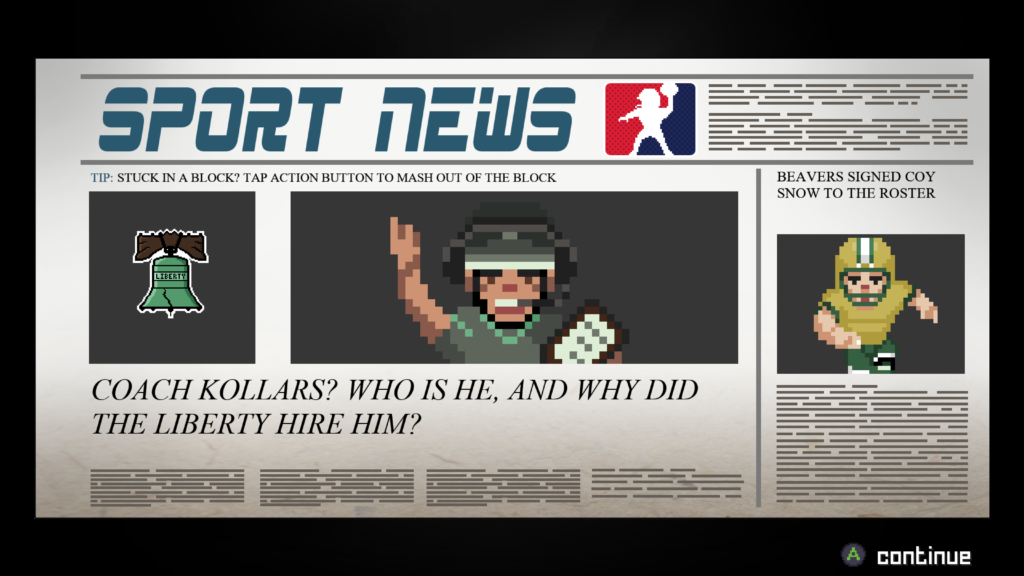 So, if you are new to this title or have any experience with the season mode that is currently available, you will find it very easy to pick up and enjoy the way you previously had, or find it incredibly accessible if you’re a newcomer to the series.

While the season play stays the same, there is a new option implemented during the actual season, which is referred to as “player wire.” 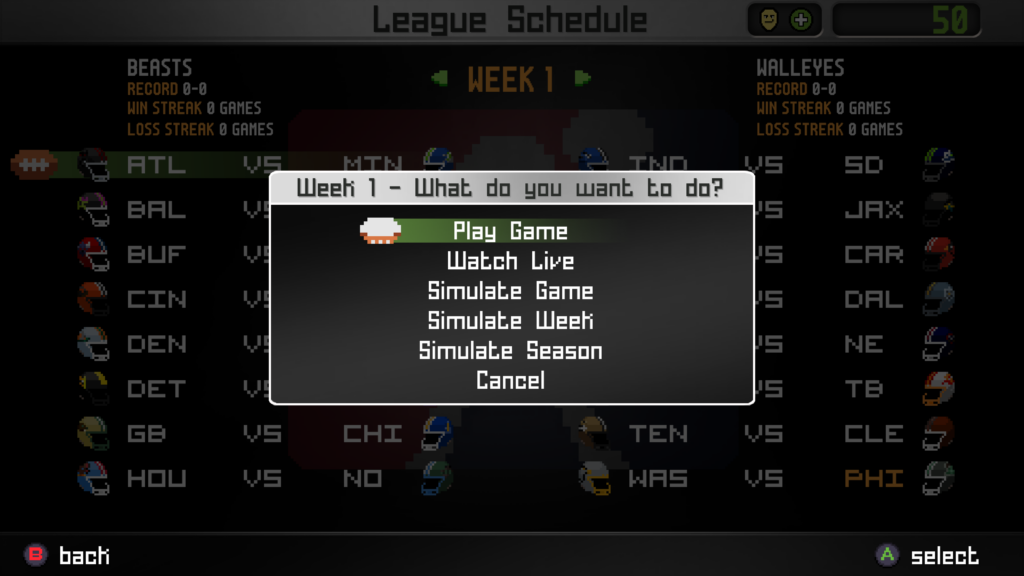 The all-new player wire will pop up for the first half of the season after each week is played, and it will inform you of how certain players are feeling. This is impacted by their play, and whether or not they are happy with their contract. 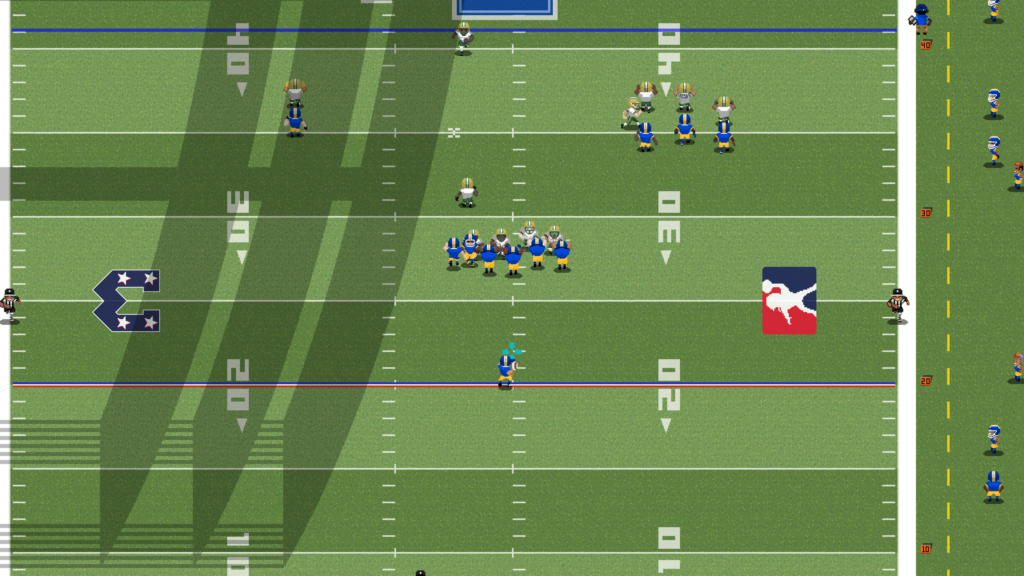 You will have options to meet players’ demands, or you also have to option to cut them, but the chances are limited and so you need to understand how that player fits into your salary cap and your team’s future. If they don’t, let them play out their initial contract or cut them.

This is where the game fully embraces the idea of a proper franchise mode, and I immediately felt comfortable taking part in the offseason itinerary. 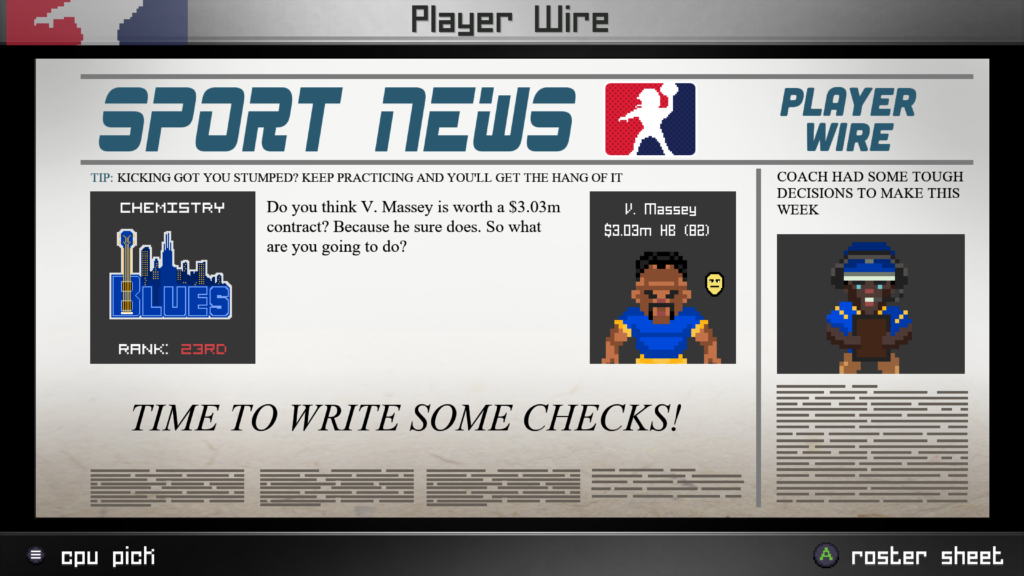 Once the season officially ended and the championship was decided, I was taken to a multiple-segment screen that allowed me to view retirees, view and sign free agents, see player progressions, and participate in the draft.

All of this combined is pretty standard stuff, but it flows nicely together and some additions are more important than others. For me, the free agency period and player progression are essential to take note of as they help dictate to a large degree how you approach the draft, and who inevitably becomes a member of your current franchise. 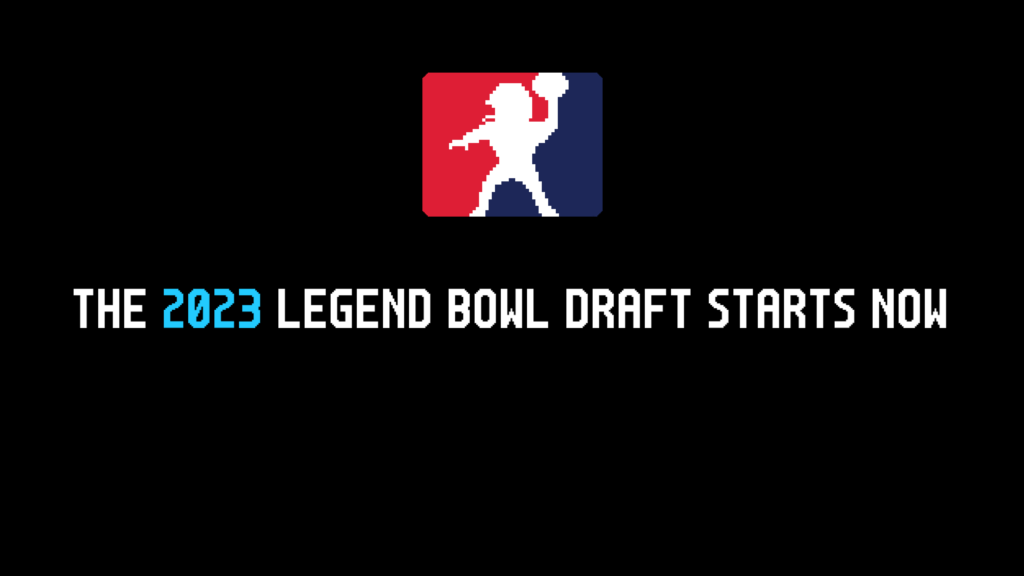 Once all of the above tasks have been completed, it is time to participate in the draft. As with most new franchise mode inclusions, the draft is pretty straightforward. The available players are there on the screen and include an abundance of pre-draft information. So, depending on who you are drafting, you can view a player’s strengths, areas for improvement, speed, overall rating, and more. 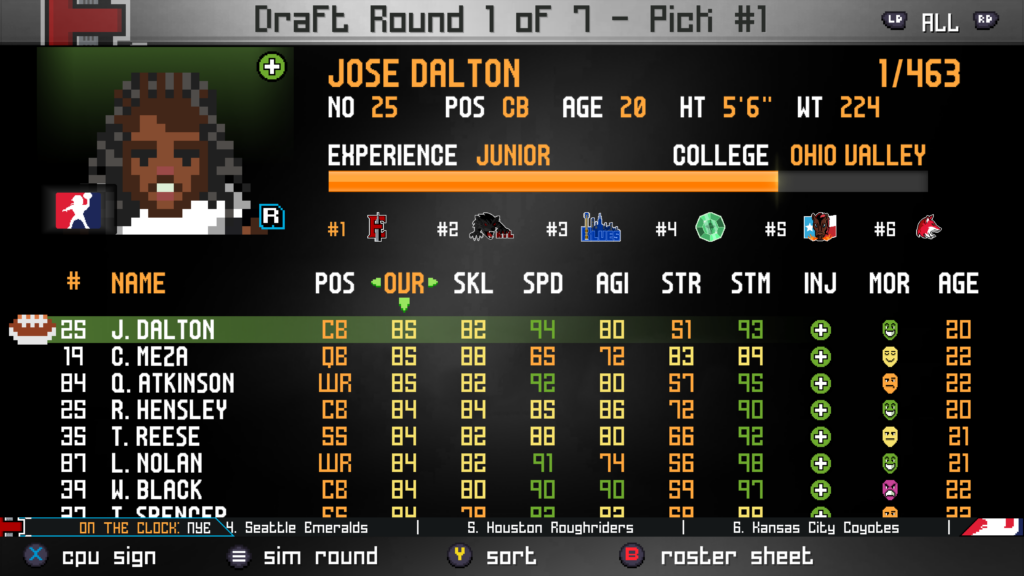 Depending on what position you are drafting, some of this information listed above will have little impact if you’re drafting for defensive tackle or center instead of a skill position. Still, regardless, it’s all there for your consumption.

Along with the other offseason activities, you will be able to see players who were voted into the hall of fame, milestones that have been achieved, and stats accumulation for each player individually as the year(s) progress. The combination of all of this makes for a deep, fluid, and quick-hitting offseason, but it’s also a system that is easy to understand and enjoy while setting you up for the next season. 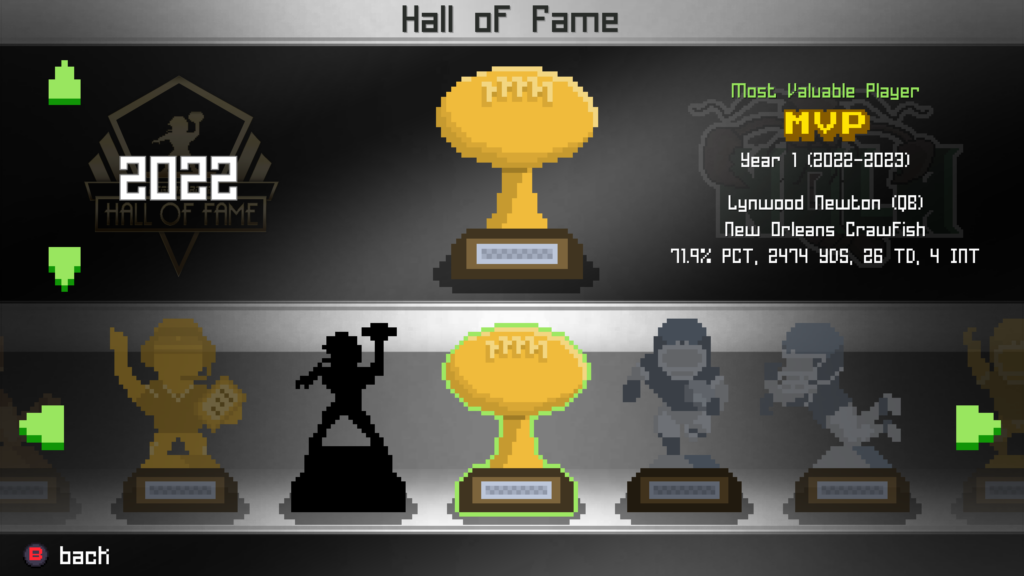 While I have mentioned most of the new items, the ones that helped create a true sense of immersion for me were the player wire, free agency, and the draft. All three of these combined helped make franchise mode in Legend Bowl feel like it was a continuous effort in building your team. While you and the team you coach were constant, every other situation was fluid.

Franchise Improvements In The Future

I love what the new franchise mode has to offer in Legend Bowl and have a complete understanding that this is being built from the ground up. Hopefully, as this series continues and the development team grows larger (hopefully), items such as better draft presentation, ability to trade, and online franchise can be implemented.

Those are pretty big additions, and I get that, but a game such as Legend Bowl feels like it can sustain life for many years. With all the new additions and improvements implemented already, I have complete faith in Super Pixel and King Javo continuing to improve this franchise in the arcade-style franchise genre.

I have always been very impressed with the immersion and realistic style of football that has been experienced in Legend Bowl, and these new additions did nothing but help push that enjoyment to the next level. There is always room for new inclusions and improvements. Still, the current $24.99 (USD) price tag on Steam is well worth the cost considering the continuous effort and refinements constantly being implemented into the title.