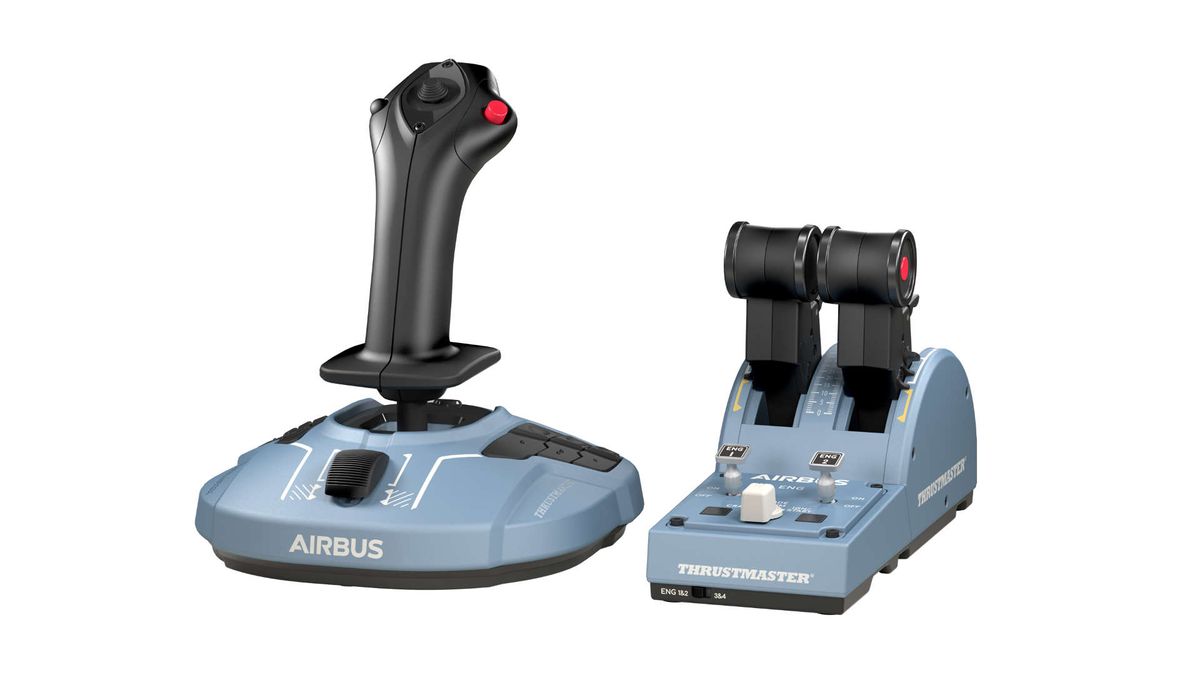 You’re a Microsoft Flight Simulator fan, and that means you care about detail. Don’t worry, Thrustmaster’s on your side too. Not content with creating the ultimate in combat HOTAS flight sticks, with the replica A-10C Warthog, F-16C, and F/A-18C controls, it’s also getting in on the civil side of aviation too with a new Airbus partnership. Yup, if you want to settle in for the long haul with the release of the next-gen MS Flight Sim you can now do so with a stick based on the iconic A320, the TCA Sidestick Airbus Edition.

This time around it’s less a replica and more inspired by the A320 design, which means you don’t get the original’s base, which honestly looks like it was ripped out of an 80’s manual transmission Ford, but you do get a whole lot more control for your money.

Where the actual flight stick in an A320 just offers you a little axis control, the new Thrustmaster Civil Aviation (TCA) stick adds a pair of triggers (‘cos you’ve just got to on a PC joystick, right?), a hatswitch, and an extra top button. You also get a mini-throttle on the base for a little extra control too.

Add in another 12 buttons arrayed around that pale Airbus-blue base and you’ve got a setup where you don’t necessarily need an extra throttle block… but you can have an A320-style one of those too.

The Sidestick is the first product of the TCA range, but Thrustmaster is also dropping in a TCA Quadrant that is set for release later, which offers more buttons and a dual-throttle arrangement too. Both are available for pre-order from today, with the stick launching on June 25 and the throttle following on September 24.

Later you’ll also be able to pick up the TCA Quadrant Add-On units, which replicate the brakes and flaps controls of an A320. Though there hasn’t been an official date for that set as yet.

We got our first taste of civil aviation earlier this week when Thrustmaster fired over a sample of the new stick. While it maybe doesn’t have the speed you might need in Star Wars Squadrons when it launches in October, or for the smaller ships in Elite: Dangerous, it’s obviously been built for smooth, controlled flight.

The travel on the stick is solid and reliably resistant, and while it’s not stiff, it’s strong enough to ensure that you don’t end up throwing it from one extreme to another across any of its axes. I’m not as sold on the buttons on the base, however, they feel a little spongey to me, but this is an early sample we’ve been testing so I’ll hold my judgement until the final units are on sale.

Flight Sim X has been a nightmare on my system, and so I took to piloting one of the larger craft in Elite instead. Gliding down onto the surface of a planet, or slowly squeezing through the port of a rotating starbase, was a silken experience with this solid stick. Flipping around like a BSG Viper in combat, however, wasn’t quite what the TCA Sidestick Airbus Edition is built for.

San Francisco to Hong Kong in real-time is probably more its raison d’etre.

Which means it’s not necessarily going to replace my beloved Thrustmaster Warthog HOTAS from my ED arsenal, but for the gorgeously realistic new MS Flight Simulator, it’s likely your best bet for that true utilitarian Airbus aesthetic.