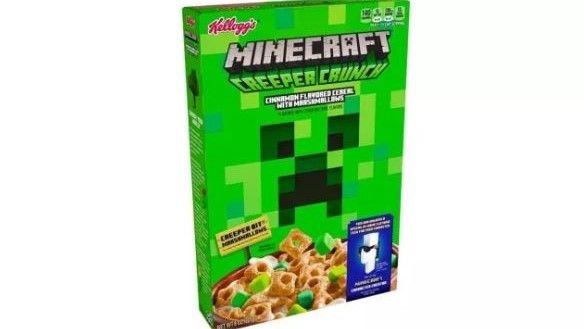 I love Minecraft. I live and breathe Minecraft. And now Kellogg’s is releasing a Minecraft cereal, I’m asking myself would I eat Minecraft? Looks like I will never find out as the cinnamon-flavoured ‘Creeper Crunch’ will be a US exclusive, hitting store shelves this August.

The cereal includes grainy bits that look like square-shaped Cheerios with little green marshmallow cubes that represent Minecraft’s creepers. You’ll have the option of two different cereal box sizes, an 8oz box for $4/£3 or a 12oz box for $6/£5. Each Creeper Crunch cereal box will also include a code for in-game clothes items like cloaks and jackets.

The press release reads: “With a global audience of over 126MM players per month, Minecraft is bringing the creative, adventurous spirit of its wildly popular game to another platform—cereal! Introducing Kellogg’s Minecraft Creeper Crunch Cereal; a tasty, cinnamon-flavored cereal featuring green square-shaped “Creeper Bit” marshmallows that delivers the vibrant world of Minecraft.” Thanks for highlighting this unholy cereal GamesRadar(via Gaming Trend).

This isn’t the first time Kelloggs have released videogame cereal. The company also partnered with Blizzard back in 2018 to create an Overwatch cereal called Lucio-Ohs, based on the game’s hover-roller-blading DJ.

Minecraft players have been spoiled recently. First, a bulky update to the Nether with new biomes, mobs, and materials. And now a new cereal—yummy.