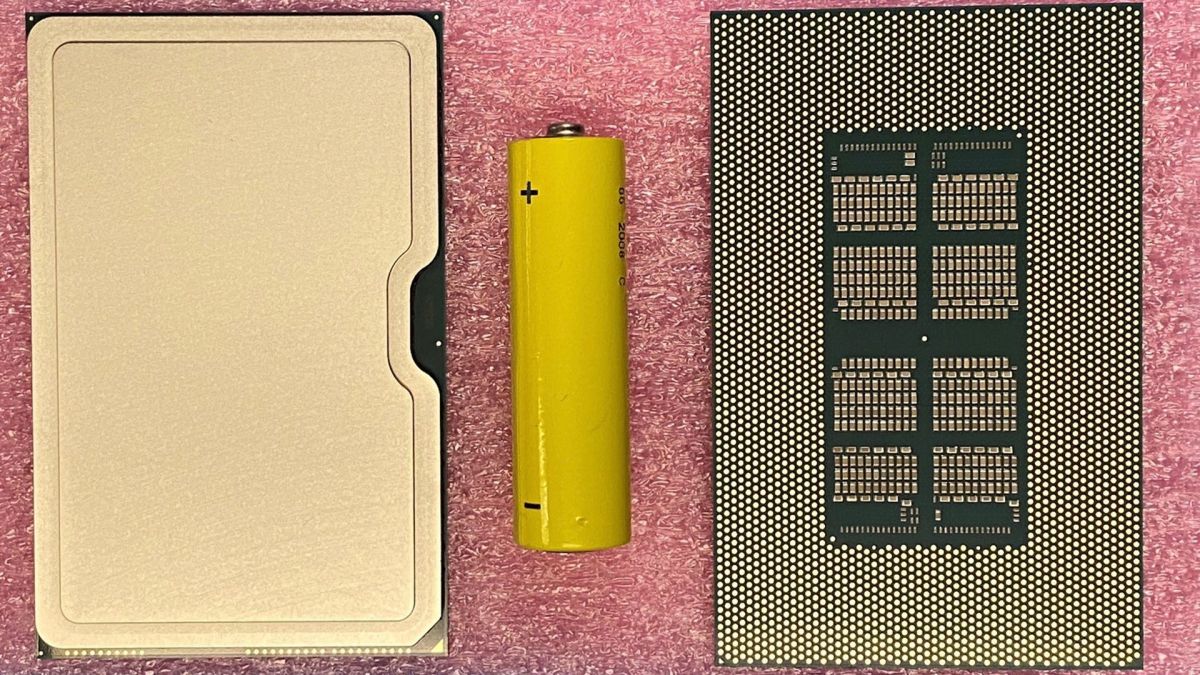 Looks like a Xeon, huh? It’s more likely an Intel Xe GPU set to release in 2021, and it’s just been teased by the Intel Odyssey team and Intel chief architect Raja Koduri on Twitter as a good fit for “battle-fielding and b-floating”. AA battery for scale.

The LGA package configuration isn’t common for graphics chips, at least not those from AMD and Nvidia, but this isn’t your usual chip. Judging by the fact Raja Koduri refers to the chip as the “baap of all”, a term the Intel India team have been using in reference to the Intel Xe HP architecture, it sure looks a lot like Intel’s prototype enthusiast and workstation GPU.

Intel divvies up the Intel Xe architecture into three segments: LP, HP, and HPC. Each one fulfills a slightly different role in the Intel Xe GPU lineup: Xe LP satiates the entry-level demand, Xe HP is tipped to offer professional-grade and enthusiast graphics, and Xe HPC is being built with supercomputer smarts in mind.

The bfloat16 floating-point number format is commonly used across AI inference, most of all by Intel within its lineup of machine learning accelerators. So we don’t have to read into that one too far to get the idea. It’s rather “battle-fielding” that has us convinced Intel just tacitly confirmed its own equivalent of a high-end Intel Xe graphics cards for gaming. And of course Koduri would be the one to announce it.

It makes sense, after all. The Intel Xe LP DG1 graphics card teased at CES 2020 didn’t stun us with its gaming performance. Reportedly coming in with just 96 Execution Units (EUs), it benchmarked around 30fps in Warframe on low at 1080p at the time. That card wasn’t intended to represent the final gaming performance of the Intel Xe LP architecture, but needless to say it didn’t fill us with confidence that Intel Xe LP would find a home in our gaming PCs anytime soon.

It’s all Xe HP – the team here in @intel Bangalore celebrated crossing a significant milestone on a journey to what would easily be the largest silicon designed in india and amongst the largest anywhere. The team calls it “the baap of all” 😀 @IntelIndia pic.twitter.com/scBrFFmhtlDecember 5, 2019

Leaked slides suggest Xe HP is set to come with a far greater span of configurations—from 128 EUs up to a whopping 512 EUs. Within that range could lie a much more power gaming graphics card than DG1—and the chip we’re looking at right now could be an early version of it.

Intel Xe has been pencilled in for release this year. Another of Koduri’s cryptic tweets had initially hinted at a launch in June, but that may no longer hold up considering the remote access to labs referenced in the more recent tweet above. At least one Intel Xe product has been confirmed for a mid-year release: Intel Tiger Lake. These chips will feature 96 EUs of Gen 12 (Xe) graphics, and will be making their way into laptops sometime in the very near future.

And don’t get your hopes up for an LGA GPU when the Intel Xe release date does roll around. That’s likely just a sample quirk for convenience’s sake during development. Unless….