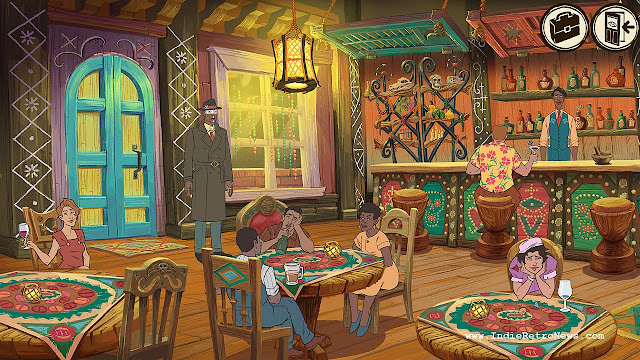 I think it’s about time we put those homebrew games aside and look towards an Adventure game that may excite those who played that fantastic game ‘Monkey Island’ or even the classic ‘Kings Quest’. As we’ve recently been informed through our email, that Short Sleeve humorous point and click adventure game of ‘Voodoo Detective ‘ is coming to Epic, Steam, Android and iOS) as of May 24th. A game that draws its inspiration from the classics such as Monkey Island  and takes players on an adventure with many twists and turns.

“If you’re looking for adventure, you may find it in Voodoo Detective, the point-and-click sensation! New Ginen: a small island town steeped in rich Voodoo culture, overrun by chain stores, infested with privileged tourists. Where local color and colonial corruption clash in a desperate battle for survival. Against this fascinating backdrop we meet a mysterious woman with no past standing at the center of a drama so profound the threads of reality are threatening to unravel! Join Voodoo Detective on his latest case, where danger hides behind every dirty secret and each thrilling moment may be his last. It’s time to don your fedora and trench coat, detective, you’ve got a mystery to solve!“