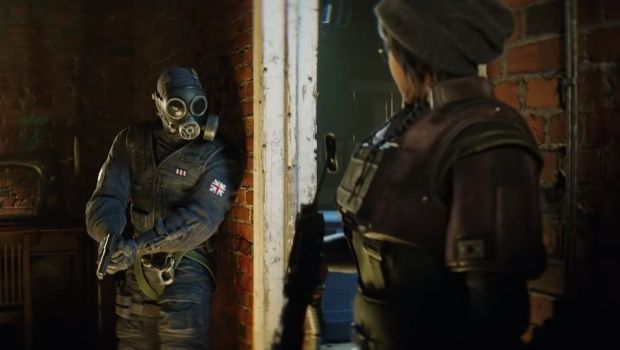 The shaky footage of Rainbow Six Siege’s next two operators from a few weeks ago was a pinhole leak, and now the dam has broken and a wave of Season 3 and 4 info has hit us. There’s a lot to unpack: sticky cameras, robotic arms, a new hard breaching tool, laser grids, and more weapon sights.

These leaks seem to span into both Season 3 and Season 4 of Siege’s Year 5 roadmap, giving us a good idea of what to expect in the game over the next six months. Here’s a rundown of the big additions and changes, which right now are all unverified:

Scout, a possible code name, is almost certainly Siege’s new Splinter Cell crossover operator that has been previously leaked and teased by Ubisoft. In the video (embedded below) shared by Zer0Bytes on Reddit, we get our best look yet at his appearance and drill camera gadget.

We can see Scout fire four of these drill cameras into a wall on House and scroll through their views independently, just like Valkyrie and her cameras, except Scout’s cameras can apparently deal ranged damage. It’s hard to tell what’s happening without sound or effects, but the player is able to zap himself down to 80 health after a few shots from the cameras.

As for the drill functionality, that part is perplexing too. In the video, the cameras look outward from the wall like any other camera. But the name suggests that they can drill through soft walls and see what’s on the other side. I think that’s still likely the case, but we didn’t see it because the cameras in the video are attached to an unbreakable wall. If he can truly use the cameras on any surface, then Scout could prove to be the most versatile information operator in Siege.

The video also gives us a much better look at Scout’s primary assault rifle, the new SC3000K. Its shape and design are a clear homage to the SC series of rifles that Sam Fisher employs in the Splinter Cell series—very cool.

The video also sheds more light on Aruni, the Thai defender coming in Season 4. We previously got a peek at her left bionic arm that can punch holes in walls, but now we know just how effective it is. With seemingly unlimited use, she can puncture holes around the size of shotgun blasts. She can also destroy doors and window barricades in a single strike, surely a handy trick for spawnpeeking and run-outs. I did notice that the wooden studs within walls have to be specifically targeted to be destroyed, which may make her inefficient for quickly making rotations.

Her actual gadget is the laser reinforcement, called the Surya Gate in a previous leak. Our first look at the gadget shows a round ball that attaches to doorways and walls (and probably windows) to project a protective laser grid. As Aruni approaches the gate automatically shuts off and comes back on as she leaves. Presumably, the lasers will damage attackers that try to sneak by without destroying the gadget, but that may require a grenade, EMP or Twitch.

It’s about time we got a good look at the secondary hard breaching gadget that Ubisoft has been teasing since February. This is obviously an unfinished version, but I believe this represents the destructive power we can expect from this gadget. Having this kind of breaching power as a secondary gadget is definitely a radical change to Siege’s meta. That said, the hole this creates is small enough that you likely can’t navigate through the gap, even if you crawl.

There are still some big questions to be answered, like who will get the breaching charge (we see it with Nøkk here, so there’s one), if it destroys reinforced hatches, and how it interacts with anti-breach defender gadgets.

Ubisoft has been reluctant to add more weapon sights to Siege since its launch, but this leak shows a whole collection of new sights. More options for sight pictures are always a good thing, though these sights could also have magnification options we haven’t seen in Siege before. A good hint at this is a new setting screen captured by Zer0Bytes that shows options to change the individual sensitivities of 1x, 3x, 4x, 5x, and 12x scopes.

Amazingly, Zer0Bytes also recorded full map walkthroughs for the reworks of both Chalet and Skyscraper. The maps are unfinished, so expect to see missing textures and weird anomalies. It’s possible that the layouts will change in the final versions as well, but I suspect most of the changes seen here will stick.

I’ll leave you with a last, and possibly most important, new piece of content from SiegeLeakCon 2020: Tachanka’s elite skin.