Help, I can’t stop looking at this AI-generated version of B.J. Blazkowicz 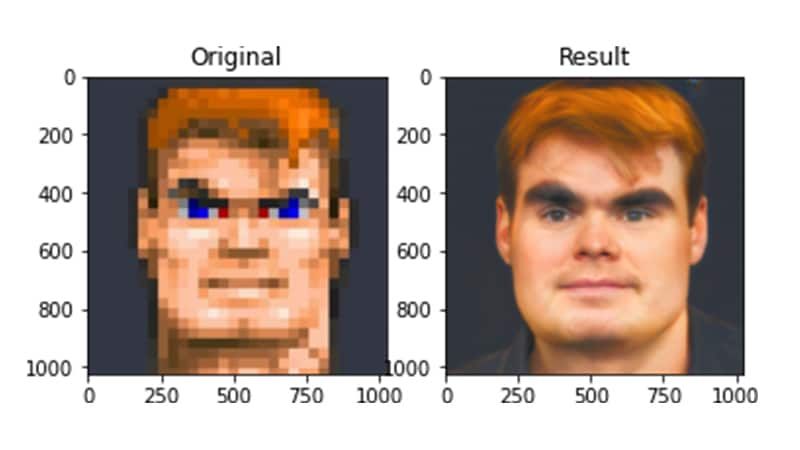 I know it’s possible for a real human being to have a jaw nearly as square as B.J. Blazkowicz’s. After all, Henry Rollins exists. But Wolfenstein 3D isn’t exactly a game I go to looking for realistic faces. B.J.’s pixelated head down there in the UI is just detailed enough to convey how healthy he is, and that’s all it needs to do.

Nothing could’ve prepared me for the A.I.-driven “face depixlizer” image that’s been floating around this week, which turns that pixel art into a horrifying human man.

He looks too real. But also, like a human who could not, or at least should not, exist. His head is so square! Those eyebrows could blot out the sun. That hair is somehow the exact hue of the the grossest ’70s shag carpet. It would be impossible for this B.J. to not land a non-speaking role as “gangster #3” in a mediocre mafia movie.

I saw this image three days ago, and I keep thinking about it. It keeps making me laugh uncomfortably at random moments. It’s something about his expression, that slight smile, like a glassy-eyed frat bro. I want to believe he’s real, and not the creation of an algorithm. If the picture hadn’t been tweeted by one of the people involved in the project, I’d think it was a Photoshop job.

That project, Face Depixelizer, lets you insert a low-res image and intelligently recreate it in greater detail with a neural network called StyleGAN, created by Nvidia a couple years ago. Obviously the effects are a bit more out there when you’re using a fake pixelated face, rather than a low-res photo of a real person. I tried running it myself, but the Depixelizer seems to be overloaded. Disappointing, because I really wanted to see what Mario’s 3D face from Mario 64 would look like turned into a “real” person.

Aside from fun faces like B.J.’s, there are some not-so-great ramifications of the technology here. For example, what happened when someone tried it on a low-res pic of Obama:

This technology will, I’m sure, inevitably be used in bad ways. We’ve seen AI quickly inherit racist traits, and I imagine neural network image generators are no different. One of the men involved with the Depixelizer calls himself “a popularizer” and seems unconcerned about any ethical considerations, tweeting “Each new technology can be beneficial and harmful, but if we censor such neural networks, then humanity will not progress.” I’m not sure humanity’s progression rests on the shoulders of upscaling images, but what do I know?

Before this technology, like most technologies, curls like a cursed monkey’s paw, I’m at least happy—I think—that it brought this new version of B.J. into my life.