Halo is getting skins, so you can turn your Warthog into a hot rod 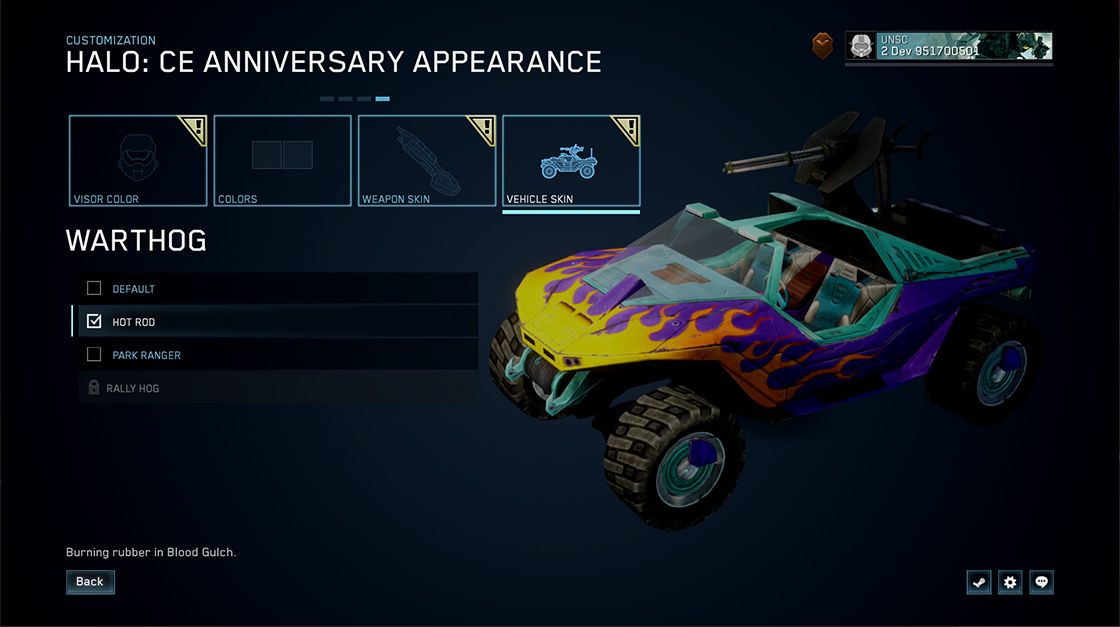 343 Industries is working away on both Halo 3 and Halo Infinite, but it looks like it’s still got some time to give attention to Master Chief’s earlier adventures. When Halo 3 is added to the Master Chief Collection, Halo: Combat Evolved will get a treat as well.

Halo players will be able to give their visors, weapons and vehicles a bit more flair thanks to skins—a first for the almost 20-year-old shooter. It’s an optional feature that players can turn off if they’d rather the old style is maintained, but everyone else will be able to enjoy new colours and flourishes.

It’s not unlike Halo 3’s customisation system, but you can change more than just the colour of your armour. It looks like a lot of the skins are still just new colours, but there are also a few flashier skins that stand out a lot more—possibly not a good thing in multiplayer matches. You can take a look at some menu screenshots in the latest development update.

Both Covenant and UNSC will have these options, and even the default skins have been enhanced. If you change a skin, it will be applied to any guns you pick up or vehicles you hop in, and they’ll retain the look even if you drop them or get out. Once someone else starts using them, they’ll change to whatever skin they’ve got selected.

While 343 Industries has started with Halo, since it didn’t have the customisation options of later games, it probably isn’t stopping there. It’s going to be looking at introducing more customisation to the other games in future seasons.

Another big addition coming to the MCC is Forge. When Halo 3 launches, it will be accompanied by the mode, letting you customise and share maps in Halo 2, Halo: Reach and Halo 3. PC players will be able to grab maps shared by Xbox One players, but at launch you won’t be able to upload any maps made on PC. You’ll still be able to share the files outside of the game, however, letting other players copy them manually.

Halo 3 doesn’t have a release date yet, but it’s apparently at the midpoint of development. We should get a clearer picture of when it will appear soon, however, as 343 will be discussing its roadmap for the rest of the year in the next blog post.