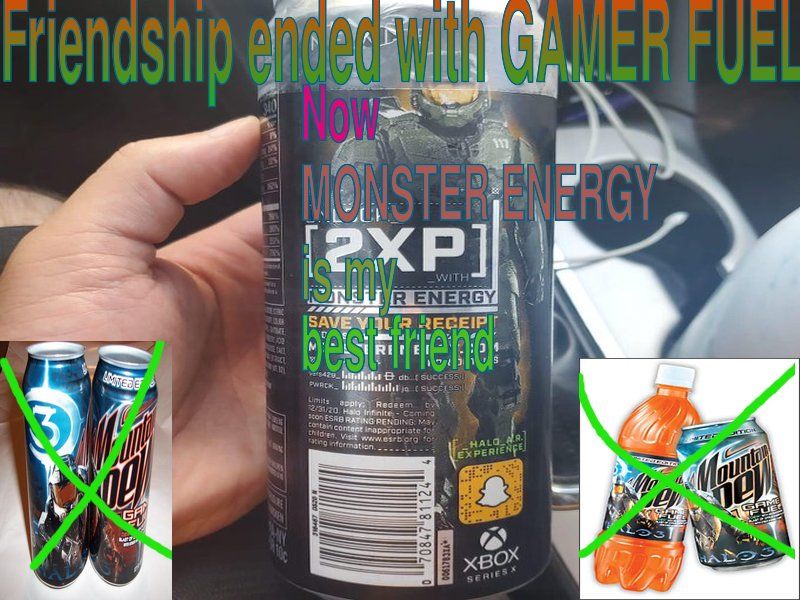 Is there a more infamous, or more orange, videogame tie-in product than the legendary Mtn Dew Game Fuel? I don’t even drink soda and I had a can of this stuff on my shelf when Halo 3 launched in 2007, such was my hype. Since the Halo 3 and Halo 4 days, Game Fuel has rebranded without Master Chief, becoming an everyday Mtn Dew spin-off.

Rather than rekindling that relationship to celebrate Halo Infinite later this year, it looks like Microsoft has spurned Mtn Dew for a new partner: Monster Energy. (Though I have to point out that Mtn Dew has really only had eyes for Call of Duty in recent years, so this break-up may have been long overdue).

Twitter account Halo Collector picked up on a new Halo Infinite Monster Energy tie-in that slipped onto shelves somewhere a bit early, a day before Microsoft’s Xbox Games Showcase unveiling. (The unveiling will be Halo Infinite, to be clear. The Monster Energy drink is less likely to make an appearance). The original image credit belongs to Facebook user Derick Hunter, who followed his best instincts of spying a Monster Energy can with Master Chief on it by immediately purchasing that can and photographing it. The world needed to know.

The Monster Energy can promises “2XP” in Halo Infinite, and must be redeemed by December 31, 2020. That’s our first confirmation that Halo Infinite will have some kind of XP system, though it follows with the progression system for cosmetics in the last few games. Anyone who buys a special Halo Monster can will likely have to wait a few months to use it, unless there’s a surprise Infinite multiplayer beta right around the corner.

This isn’t Monster Energy’s first go at a game brand tie-in. Call of Duty, Assassin’s Creed, and most prominently Death Stranding have all partnered up with the energy drink in the last few years.